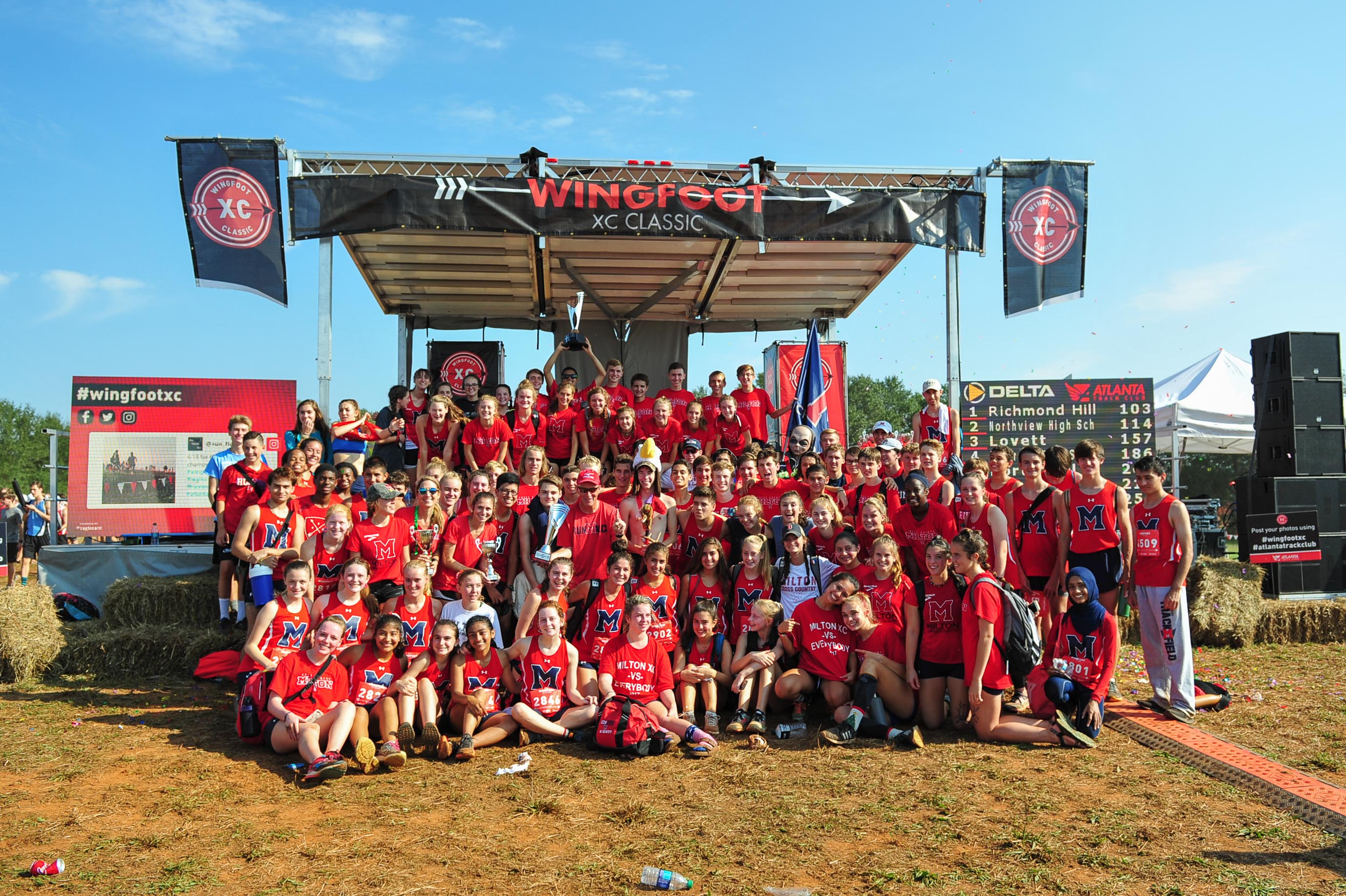 ATLANTA – September 23, 2017 – The third annual Wingfoot XC Classic delivered a meet record as well as some of the fastest times in the state, and even the nation, so far this season. Hosted by Atlanta Track Club at Sam Smith Park in Cartersville, Georgia, the event drew 90 high schools for its morning session. The afternoon will feature middle school races as well as a free one-mile event for kids and a community 5K.

Wingfoot Cup
Milton High School remains the only team to take home the Wingfoot Cup with their third consecutive win this year. The trophy is awarded to the team with the most points across the boys and girls Varsity Championship Divisions. 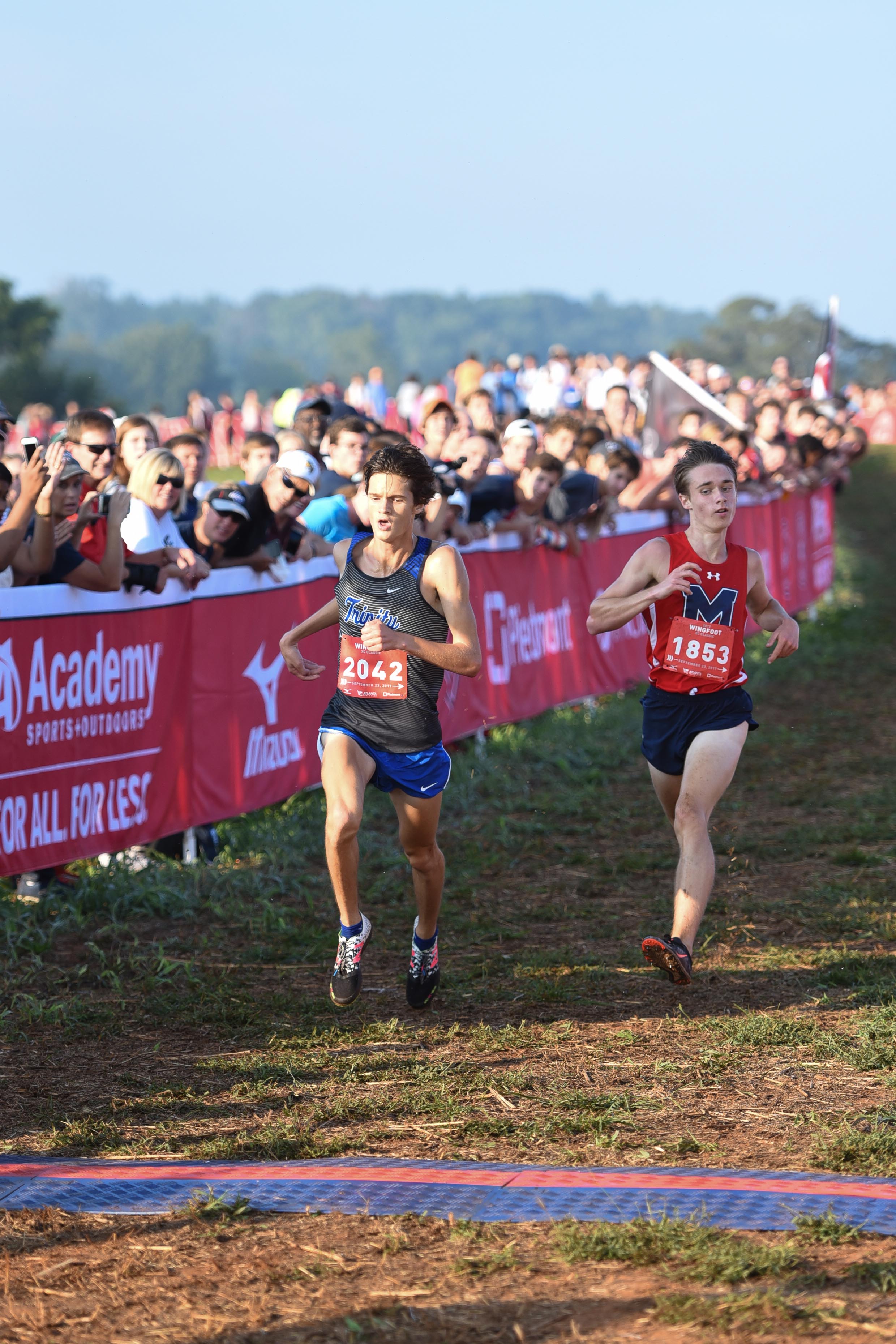 The Varsity Championship Boys Division turned out season bests galore. Jacob McLeod of Trinity Christian School was quickly out in front. Coming into mile 1, McLeod took a commanding lead over Milton High School’s Sam Bowers and Nicholas Yanek with Nick Nyman of Starrs Mill at the head of the chase pack. By mile 2, it was McLeod and Bowers battling it out. Bowers tried to make a move to shake off McLeod around 2.5 miles into the course, but the pair remained side-by-side as they entered the finish chute. McLeod managed to outkick Bowers, finishing in 14:50.3 – a meet record by 42 seconds.

Both McLeod and Bowers set season personal records today, securing the second and third best times in the nation this season through this weekend. Milton took three of the top five spots with Nicholas Yanek (15:14) in third and Michael Malkowski (15:30), who closed a huge gap in the final mile of the race, in fourth. Nyman (15:31) came in fifth.

Milton dominated this division, scoring only 32 points to secure first place with a team average of 15:29 – which is two seconds faster than their average at Knights Crossing in Virginia. Tennessee’s Brentwood Academy came in second (174) and Pope High School finished third (185).

Additionally, Justin Wachtel of Mary Persons ran a 13-second personal record of 15:49, earning him the #2 freshman time in the country as of this weekend. 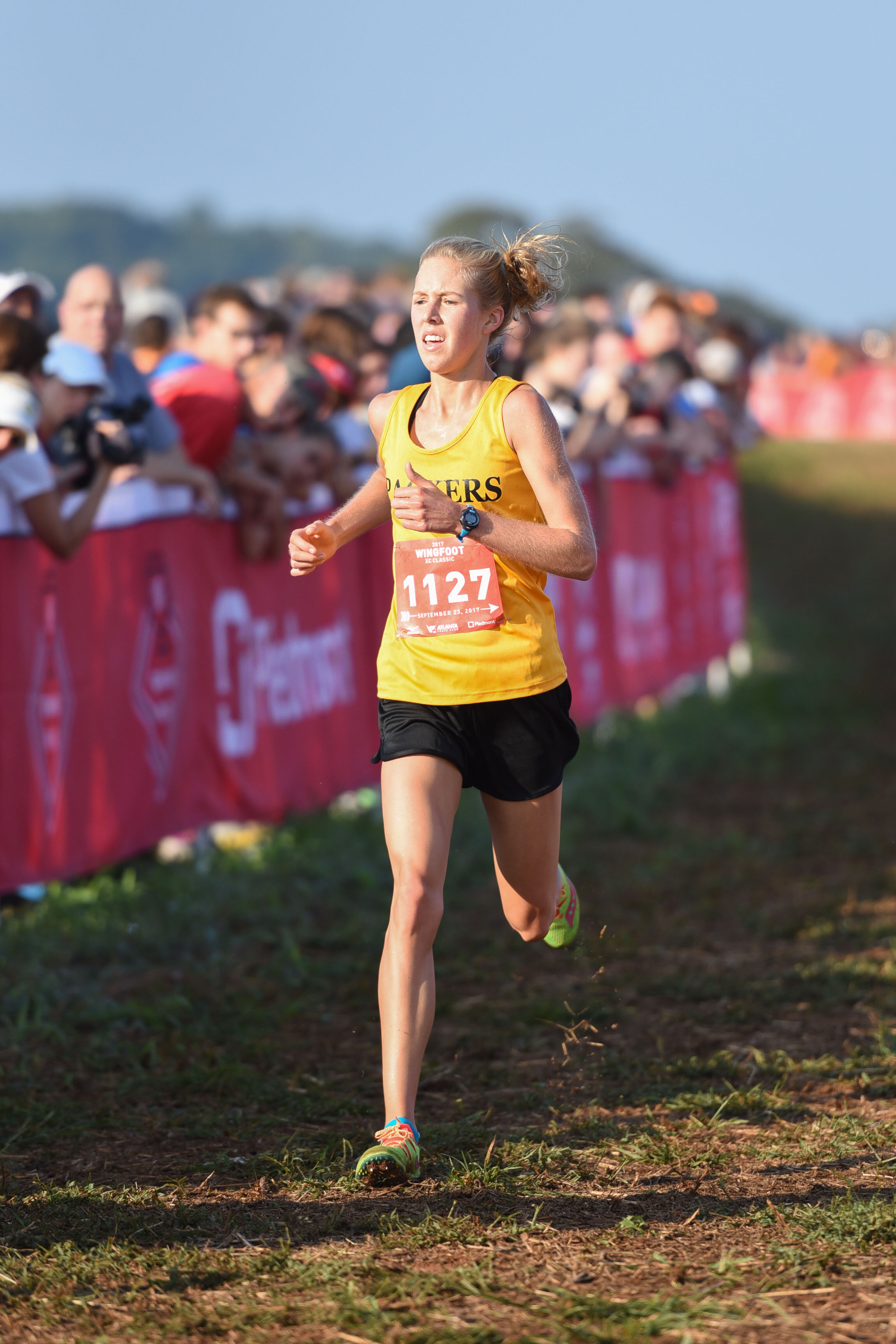 Elizabeth Funderburk of Colquitt County and Erin Leonard of Jones County High School took the lead early on in the Varsity Championship Girls Division. At mile 1, Funderburk was out in front with Leonard not far behind and Naima Turbes of Westminster School in third. Soon after, Funderburk began to open up a lead on Leonard as Rafaella Gibbons of Florida’s Winter Park High School surged into third. Funderburk looked very relaxed as she kept her big lead over Leonard heading into mile 2. In the end, Funderburk won easily in 17:32, good enough for the fastest time in the state and the 15th fastest time in the nation this season through this weekend. Gibbons placed second with 18:05, the second fastest time in Florida this season. Leonard was third in 18:07.

South Forsyth took the team win, scoring 116 points. This sets the Lady War Eagles up as the #1 team in the state. Marietta was second (165) and Marist was third (168). 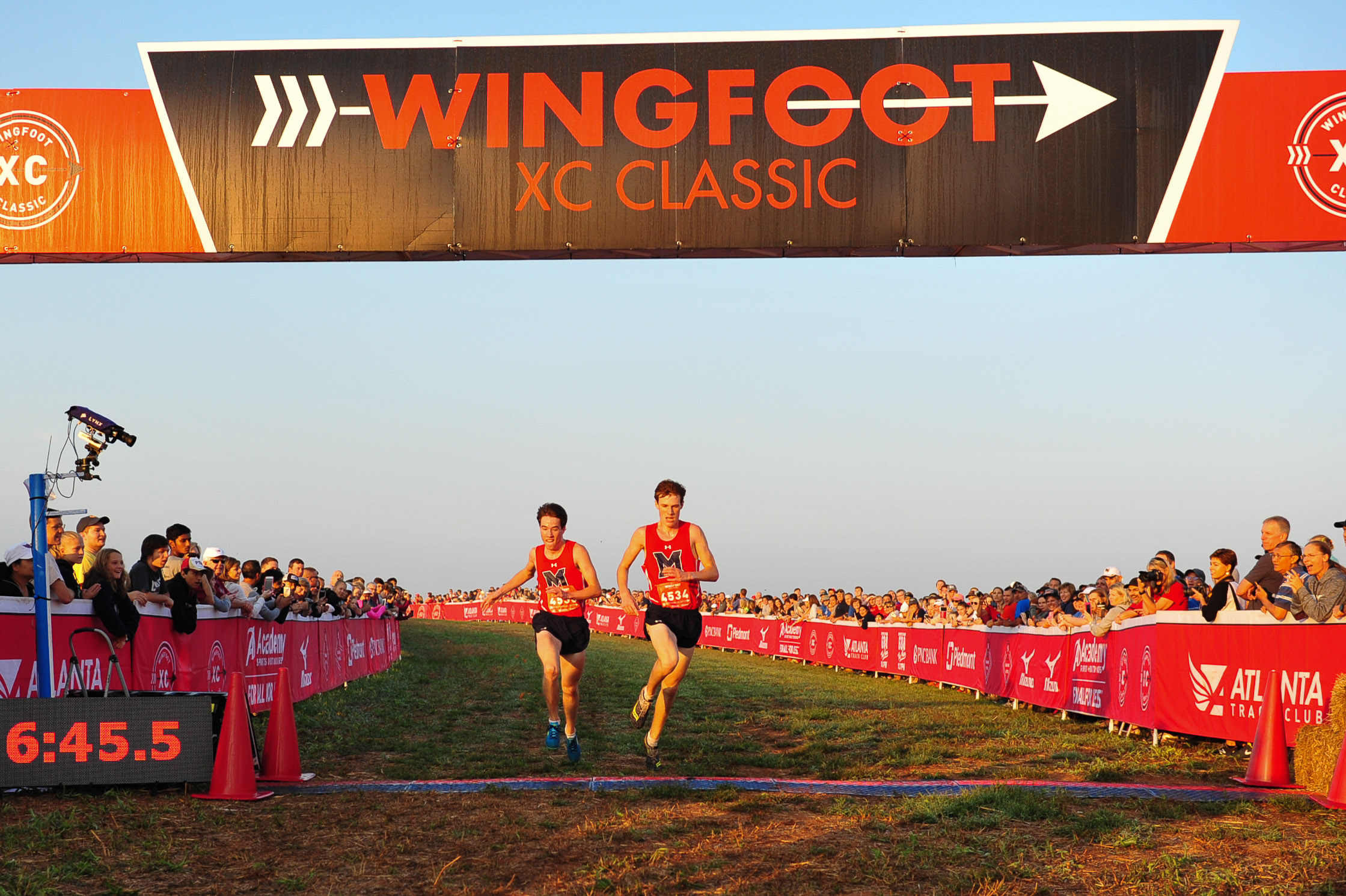 Milton teammates Gary Halverson and Cam Harman were neck and neck as they headed for the finish line of the JV Championship Boys Division. Halverson outkicked Harman by a tenth of a second for the win. The pair finished in 16:45.2 and 16:45.3. Walton’s Jayanth Kumar placed third in 16:55. As for the teams, South Forsyth edged out Milton for the top spot, 58 points to 63 points respectively. Marist placed third with 84 points. 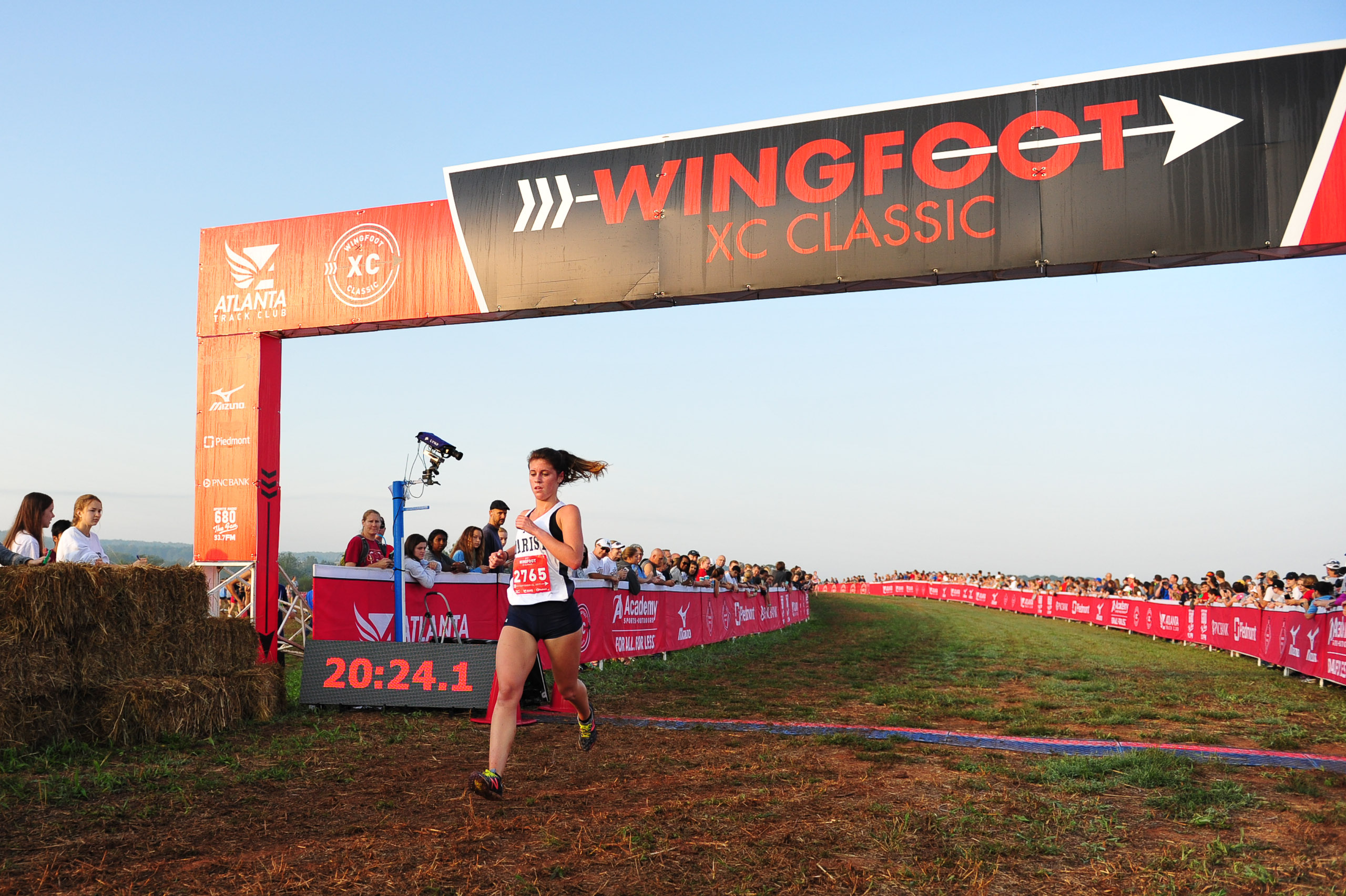 Marist took the first two spots in the JV Championship Girls Division. Katie Hartigan won in 20:23 with teammate Maggie D’Amaro not far behind in 20:38. Sydney Copeland of South Forsyth came in third in a time of 20:39. The South Forsyth girls took four of the top 10 spots placing second in the division, scoring 54 points to first-place Marist’s 40 points. Starrs Mill placed third with 91 points.

JV Boys Division
Northview High School dominated the JV Boys Division, placing four runners in the top 10 spots and winning the team division with 29 points. Teammates Paul Graham and Raleigh Browder took first and second in 17:26 and 18:19 respectively. Roswell’s Zachary Tennessee rounded out the top three with his finish of 18:32. The Norcross boys edged out Roswell for second place with 66 points. Roswell came in third with 73 points.

JV Girls Division (3K)
The JV Girls Division was reduced to a 3K course due to the heat. Maggie Jones of Landmark Christian finished first in 12:25. Rome High School’s Janet Hartman was second in 13:08. Third place went to Northview’s Mingda Liu, who finished in 13:09. For the teams, Centennial took first place with 37 points. Roswell (50 points) and Northview (53 points) rounded out the top three.

Click here for unofficial results for the high school races at the 2017 Wingfoot XC Classic.