CARTERSVILLE, GA -- September 22, 2018 --  In another thrilling Varsity Championship Boys race at the Wingfoot XC Classic, Kyle Harkabus of East Coweta High School took a photo-finish victory to win his first Wingfoot title at Sam Smith Park in Cartersville, Georgia. While Harkabus was just able to hold on to the individual title, Brentwood Academy of Tennessee became the first out-of-state team in the race’s four-year history to win a Varsity Championship. 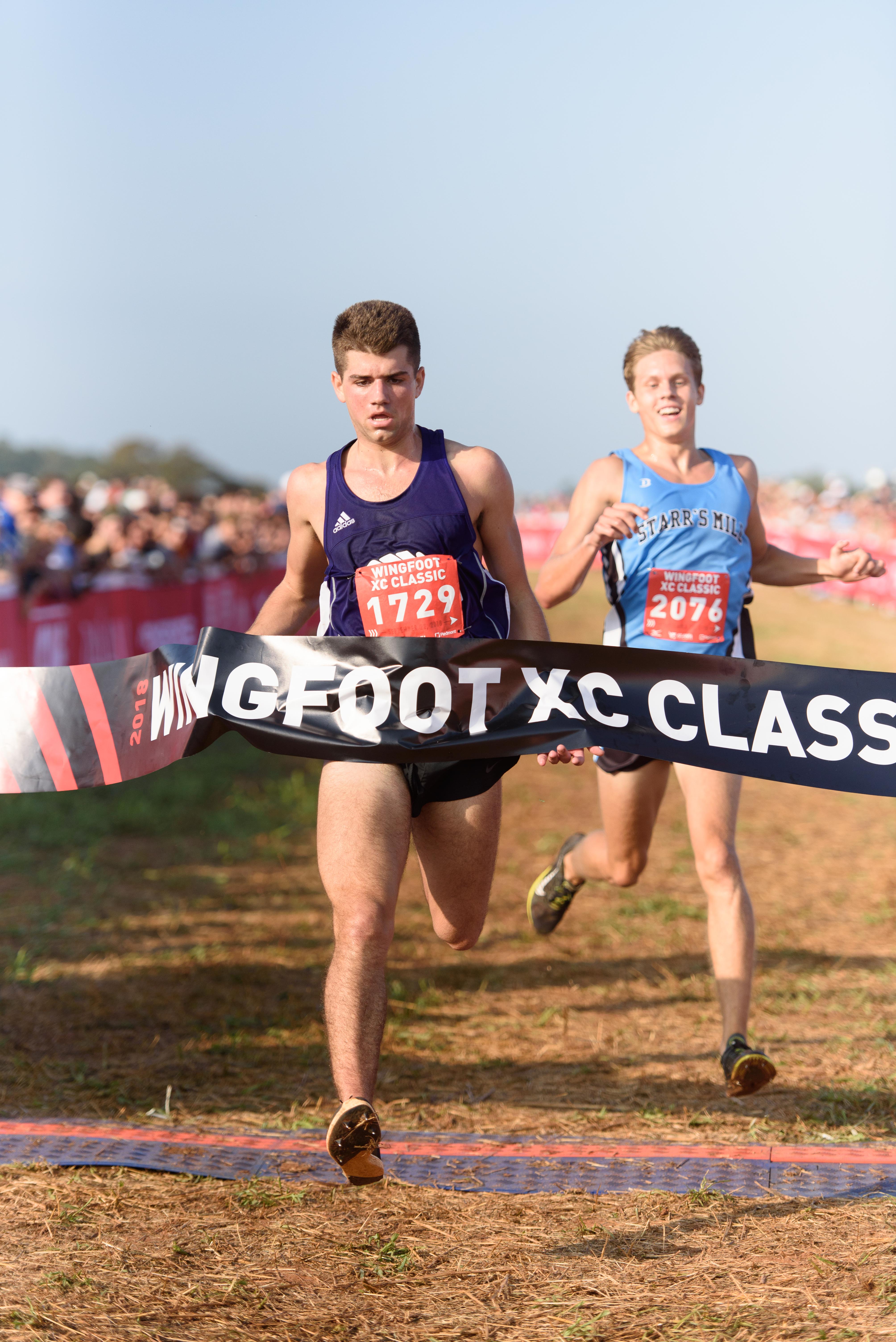 Desiree Linden, a two-time Olympic Marathoner and the 2018 Boston Marathon Champion, served as the race’s honorary starter. As soon as she fired off the gun, the 35 teams in the Championship race surged into the straight, as Harkabus, the pre-race favorite, quickly found his way to the lead pack.

Silas Franklin of Smiths Station, Alabama put in an early surge, but the pack soon settled into a steady rhythm, churning away ground with Harkabus and Cambridge High School’s Jack Filan out in front, followed by Chase Condra of Peachtree Ridge, Calan Gizelbach of Forsyth Central, Justin Wachtel of Mary Persons, and Nick Nyman of Starr's Mill.

The group stayed together through two kilometers, with the entire group seemingly content to let the race turn into a tactical affair. Harkabus and Filan continued to exchange duties at the front of the pack, both unwilling to make a race-altering move, while Condra and Gizelbach lurked just behind.

That group of four came through the two-mile marker at 10:04.7, as they seemed to have dropped Nick Nyman of Starr's Mill, who was at that point a full two and a half seconds off the lead. Even at that relatively modest pace, the group refused to separate until about 800m to go, when Harkabus all of a sudden looked behind him and found himself with a 15m gap charging up one of the final hills of the course. As they approached the final 400m, it looked like he would be able to take a comfortable win. But Nick Nyman had a different idea.

The Starr's Mill senior, who looked like he’d been dropped completely out of contention with 1000m to go, had caught up to the chase pack just after Harkabus made his move and somehow found himself as the lone runner with the legs to make a move to try and bridge the gap to first place. Over the final 400m, Nyman proceeded to stalk down Harkabus, and was on his shoulder as they crawled up the steep incline into the race’s final turn.

At that moment, just at the three-mile marker, Nyman absolutely blew past Harkabus, stunning the East Coweta junior who hadn’t seen him come up from the chase pack with an explosive kick. Nyman put two strides between him and Harkabus with just under 75m to go, but Harkabus showed incredible resolve, displaying his 1:51 800m speed and matched the move, surging dead even with Nyman with 25m to go, setting up a second straight dead sprint to the finish at Wingfoot.

Over the final strides of the race, Harkabus made a slight move and edged into Nyman’s path just as the senior’s powerful move began to fizzle out, allowing Harkabus to narrowly edge him out at the finish to take the win by fewer than four tenths of a second in 15:46.4. Gizelbach finished nearly nine seconds behind in third place, showing just how impressive a move Nyman had made to close the gap on Harkabus and set up the photo-finish.

Moments after the race, Harkabus remained stunned at how what was seemingly his race had turned into a victory that he snatched from the jaws of defeat.

“I don’t know,” he said when asked how he was able to outlast Nyman. “He surprised me. But I just used all I’ve got to try and get the win. Harkabus remains undefeated during the 2018 Cross Country season.

Though they both faded over the final 800m, Filan and Condra finished in fourth and fifth, respectively, in 15:58.3 and 16:00.8. For Condra, it marked a fourth straight top-15 finish at Wingfoot, while Filan was able to secure the low score for his Cambridge team that was hoping to be in contention for the team title.

But that was not to be, as Brentwood Academy was able to eke out a surprising victory over Pope High School, scoring 107 points ahead of Pope High School’s 155. Lead runner Matthew McMillan did not have the strongest display of his season, finishing 14th in 16:24, but he was buoyed by teammate Matthew Porter, who clocked a 16:03.8 to take sixth place. Brentwood’s overall quality showed, as they were able to also put George Payne and Cayden Durrough ahead of Pope’s first runner, meaning that even though Pope spread just 30 seconds from one to five, they were not able to take the win. Brentwood finished with a 16:37 average among their top five, with Pope in 16:54 and South Forsyth rounding out the podium with an average of 16:58.

Though South Forsyth wasn’t able to pull out the win in either the Boys or Girls Championships, the War Eagles were still able to take home the Wingfoot Cup, awarded to the school with the highest combined points across varsity championship races for the top eight places. Points are awarded in the style of track and field. The 2018 edition of the Wingfoot XC Classic marked the fourth running of the meet, started by Atlanta Track Club in 2015. Over the course of the morning session, more than 100 schools competed, making it the region’s largest cross country meet.