CARTERSVILLE, GA -- September 22, 2018 -- In a tactical, intelligent, race, Niki Narayani of the Webb School of Knoxville came into Georgia and surged to an efficient win in 18:12.4 at the 2018 Wingfoot XC Classic, hosted by Atlanta Track Club. Marietta’s Ellie Hall finished in second place, leading her Marietta High School team to a resounding victory in the Varsity Girls Championship Race.

Shooting the starting gun was official starter, Desiree Linden, a two-time Olympian and the 2018 Boston Marathon Champion. Invited as a special guest of Atlanta Track Club, she fired the gun from a hay bale in the opening straightaway before the 35 teams began streaming towards her.

Within the first 800m, a clear lead pack established itself, with Jackie Addy of Holy Innocents pacing a group including Hall, Naima Turbes of Westminster, Narayani, Mari Cagle Lockhart of Daniel, SC. and standout freshman Jenna Hutchins of Science Hill High School in Tennessee. Hutchins, the pre-race favorite, made her way to the front as they came through the first mile in 5:47.5. 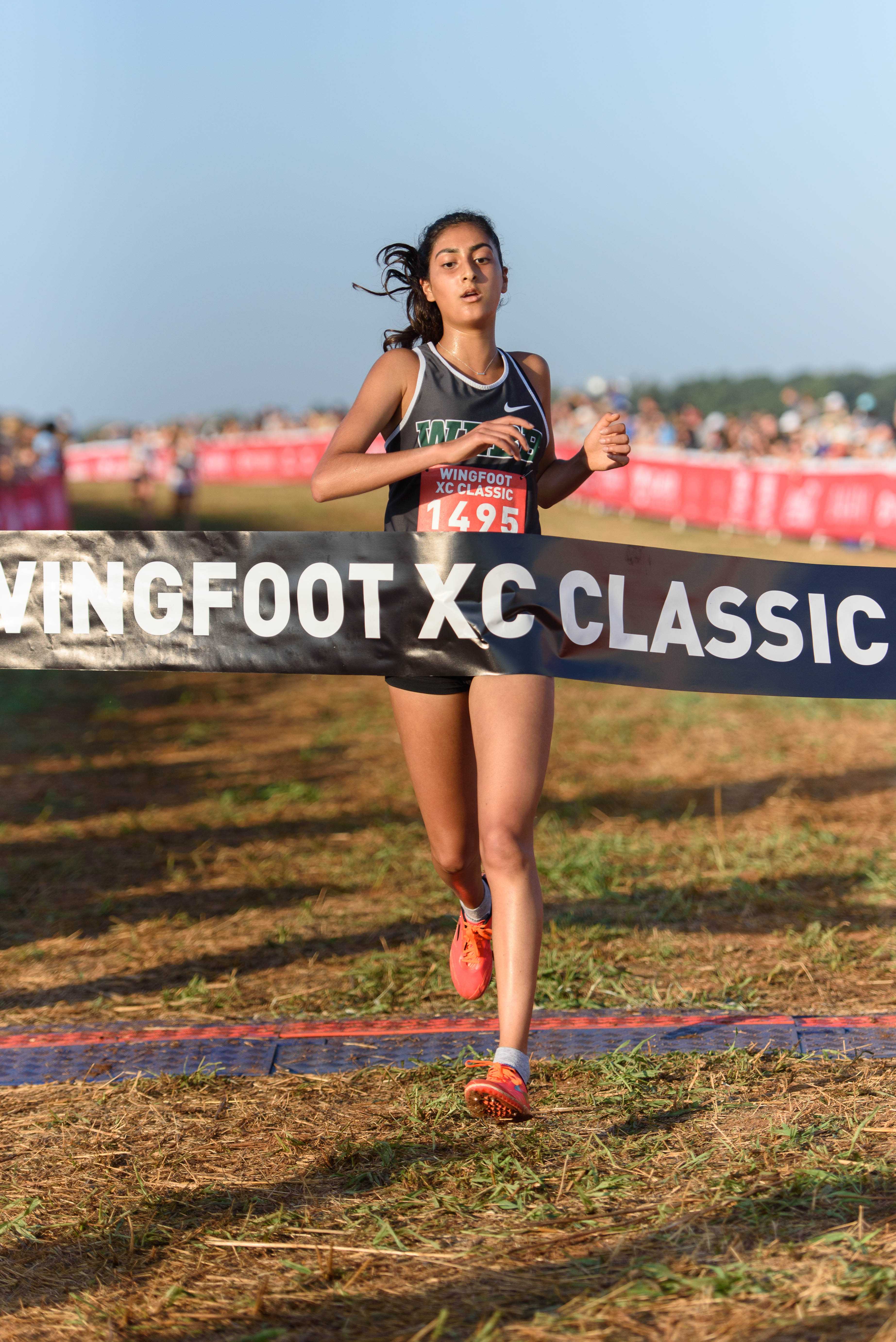 Hall, Narayani and Turbes continued to trade positions at the front throughout the second mile, with Turbes looking threatening throughout. As they came through the two-mile mark, the group remained in absolute lockstep, a six-girl set that was looking to let this become a race, rather than a fight against the clock.

As they entered the third mile, the composition of the race began to shift, with Addy and Hutchins wearing down, and Turbes and Narayani beginning to make a move. Turbes, the second-fastest returner from 2017, seemed the more likely to take the win, as she made a push with about 1200m to go as they jumped over a set of hay bales. But as soon as Turbes looked like she might open up a sizeable advantage, Narayani quickly responded to push out ahead and open a significant gap on the Westminster senior.

Narayani, who had previously won at Wingfoot in the Varsity Girls race in 2016, continued to put her foot on the gas throughout the final 800m, using a consistent, loping stride to accelerate into the homestretch and for the win. Crossing in 18:12.4, she put nearly ten seconds between her and the second placed Ellie Hall, who moved past Turbes with Hutchins to knock Turbes off the podium.

After the win, Narayani was happy with her win, though admitted to simply going on feel as she cruised in to the victory.

On the team side of the competition, Hall’s second place finish was part of a dominating performance by Marietta that saw them win with just 87 points scored. Their team average was 30 seconds faster than second-placed Marist’s, and Hall’s Blue Devils were able to put three runners in front of the War Eagles’ first.

The victory marks yet another blowout for this Marietta team, currently listed as the number one team in Georgia’s all-class rankings. They proved that they will be a true force to be reckoned with in Georgia this fall, and the unquestioned favorites heading in 7A heading into championship season.

Marist finished in second with 173 points, with South Forsyth rounding out the podium with 185.

South Forsyth claimed the Wingfoot Cup. The prize is awarded to the team with the highest score across the boys and girls varsity championship races. Points are given track and field style to the top eight teams.