Along with his identical twin brother, Joe, Jim was a high school superstar. Both won multiple state titles and were recently ranked among the top 15 New Jersey high school athletes of the 21st century. They went 1-2 at two miles in the 2010 high school national championships.  At Stanford, they ran well enough when they were healthy to both become three-time All-Americans, but injury pockmarked their college careers; Jim’s ended on the low note of a sacral stress fracture. Neither agents nor shoe companies were begging for them to take a meeting.

“I considered all my options,” said Rosa, “including not running anymore and getting a full-time job.”

As he and Joe talked over their futures, they dropped feelers to post-collegiate training groups around the country. In considering Atlanta Track Club’s Elite team, the fact that Amy Begley, a 2008 Olympian who finished sixth in the 2009 IAAF World Championships at 10,000 meters, had succeeded at the highest levels of the sport was a mark in its favor. 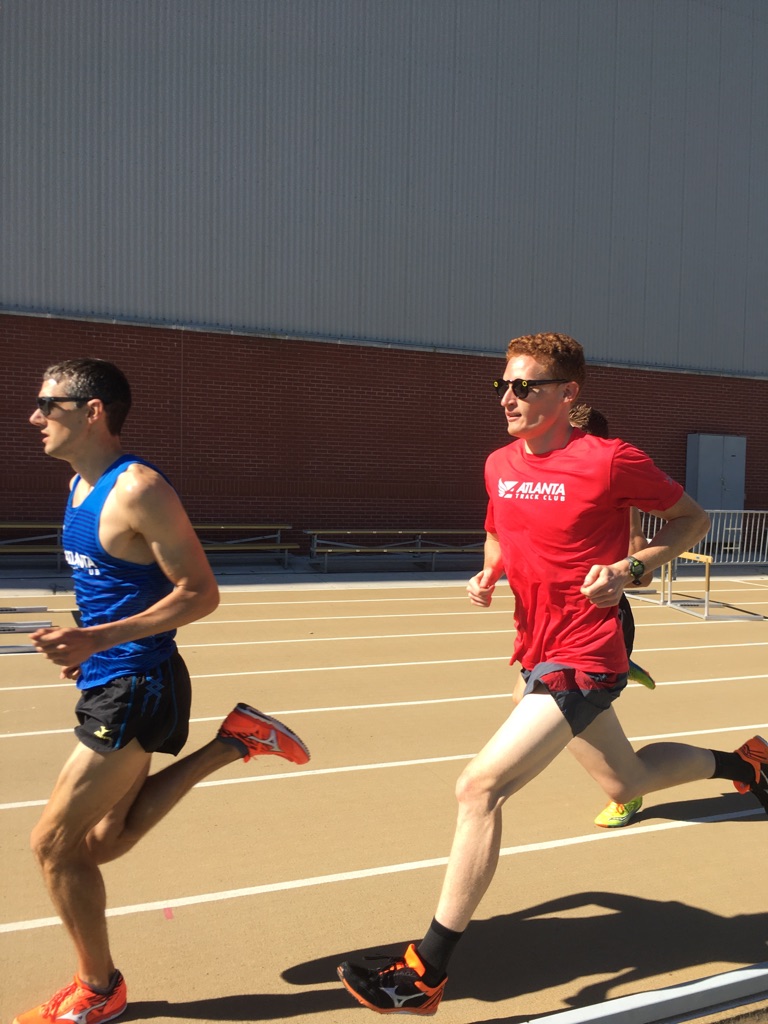 They paid a visit. They talked some more. If they were both going to keep running, they wanted to do it somewhere together. If not, maybe it was time to go their separate ways. Still on the fence, and with an interest in technology and computer science, Rosa came “pretty close” to seeking a job in Silicon Valley.

“I saw and felt a lot of myself in them,” said Kenah. “I saw guys who have a world of talent who had modest collegiate success, but hadn’t reached the pinnacle or gotten the most out of their talent. It was clear they felt pressure to chase a professional life outside of athletics because of the quality of education they’d received, just as I felt pressure coming out of Georgetown as classmates became lawyers and went to work on Wall Street.”

The Rosas listened to Kenah talk about barely scraping by in the early years after college, a tale they knew had a happy ending: In 1997, five years after graduation, Kenah won a bronze medal at the IAAF World Championships, and became an Olympian three years later.

“That was a big, important conversation,” said Jim Rosa, who along with brother moved to Atlanta in January to join the Elite Team.

On July 4, Jim Rosa will be among the professional field for the 48th running of the AJC Peachtree Road Race.

“There’s no pressure,” said Rosa, of lining up for an event that serves as both his professional debut at the distance and the USATF 10 km Championships. “There are no nerves, knowing that I’m in way better shape than I’ve been in the last year and a half. I definitely think I can surprise some people.”

After the stress fracture in the spring of 2016, Rosa didn’t run at all for five or six months. When he started back in December, he ran but once a week. Even now he’s running only four or five days a week, a cautious regimen augmented by cross-training.

His brother, on his own careful comeback from a femoral stress reaction, isn’t racing Peachtree. It’s a situation in which they’ve found themselves before.

“I know for me, when I’m hurt and Joe’s running well, it’s awesome to have a way to stay involved in the sport, just watching him race. If we see the other one run well, it’s just confirmation that we can run well, too. It’s that unique thing where we both have the exact same genes.”

And, as their college careers came to a close, the exact same dilemma.

Said Kenah: “I truly believe that’s the role of clubs like ours, to be that bridge for athletes like the Rosas and myself, athletes who aren’t coming out of college with an agent who’s negotiating a six-figure endorsement deal for them but who still have plenty to give.”