After Track Season, Jorgensen Ready for the Road

ATLANTA -- July 3, 2018 -- Gwen Jorgensen arrived at the University of Wisconsin as a walk-on to the swim team, and left as an All-American in track and cross country. She’d just begun a full-time career as an accountant when USA Triathlon called, urging her to consider the sport despite a total lack of cycling experience. Soon, she was USA Triathlon’s 2010 Rookie of the Year.

In 2013, Jorgensen became the first American woman to win an ITU World Triathlon Series race; a year later she won the first of her two world championship titles; and in 2016 she broke the tape in Rio as the Olympic gold medalist.

Last fall, she announced that she would be going after another gold medal in 2020.

As part of that quest, the 32-year-old Jorgensen will compete in Wednesday’s AJC Peachtree Road Race, which serves as the 2018 USA 10 km Championships.  And she’s looking to break that tape, too.

“I never enter a race planning for second or third or seventh,” she said.

This appears to be just the third road 10K for Jorgensen, and her first in the U.S., but she arrives in Atlanta as one of the race favorites. With a personal best of 32:12 from the 2015 Sydney:10 in Australia, where she was based for much of her triathlon training, Jorgensen is the second-fastest woman in the Peachtree field. Only defending champion Aliphine Tuliamuk (31:52) is faster.

Tuliamuk, who is returning, is excited about her rival’s late decision to enter. “It makes the race more interesting and competitive,” she said. Sara Hall, coming off the fastest half marathon (1:09:27) of her career last weekend, is right behind Jorgensen on the 10K depth chart, with a best of 32:14. Although both have the advantage over Jorgensen in being familiar with the course – Hall was second at the USA 10 km Championships here in 2014 – the newcomer won’t be surprised by the heat.

After she said she was doing the Peachtree, she said, one wag told her: “I did the race in 1981, before you were born, and I just stopped sweating yesterday.” 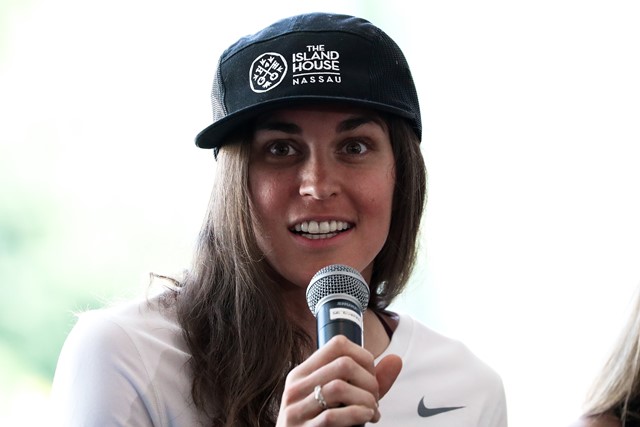 When Jorgensen first paused to start a family after winning her gold medal, she had planned to resume her triathlon career. But while taking 2017 off from competition – Stanley, her first child, was born in August – she finally had the downtime to ponder her future. She had accomplished everything she wanted to accomplish in triathlon, even things she had never dreamed of when she began. What fed her soul? Where was her heart?

“I want it all again except entirely new,” she announced on Instagram early last November. “Hello marathon, it’s nice to meet you.”

Jorgensen actually made her first acquaintance with the distance at the 2016 TCS New York City Marathon, just 76 days after winning her gold medal. With no specific marathon training, she finished in 2:41:01. She’s now up to 100 miles a week, and in May she finished fourth in the USA Half Marathon Championships in 1:10:58. (She will need to run another marathon in 2:45 or faster before January 19, 2020, to quality for the U.S. Olympic Marathon Trials here in Atlanta on February 29, 2020.)

In late June, she was underwhelmed by her seventh-place, 32:24.09 finish at 10,000 meters on the track at the USATF Outdoor Championships.

“I felt like I was fitter than that performance,” said Jorgensen, whose coach, Jerry Schumacher, said soon afterward: “I think we’re going to have you race again.”

The Peachtree was perfect. “I’m so excited to race for a U.S. championship on the Fourth of July, at a race with such history, that’s been going on for 49 years,” she said. What could be better, she added, than “to celebrate the Fourth of July doing something I love, joining 60,000 people doing the same thing?”

Jorgensen said her goal “is to go in it, race hard and know that I gave it my all.” But a victory against a strong field at a U.S. championship on Independence Day would be sweet.

“It would be a just a huge honor,” she said. “Just being in this race and competing against these other women is an honor.”