Aliphine Tuliamuk is Flagged as a Peachtree Favorite

ATLANTA - June 29, 2017 -- Aliphine Tuliamuk was happy to win the first race she ran after becoming an American citizen in April 2016, but something was missing. So she was thrilled the next time out, at the 2016 NYRR Mini 10K, even though she finished second.

“I had to wait a month, but that was the race when I got the American flag,” she said. “I had been looking forward to that.”

Earlier this month, Tuliamuk crossed the finish line of the 2017 edition of the Mini in third place, one step down on the podium.

“But I was still very happy,” she said, “because I got my flag again.” 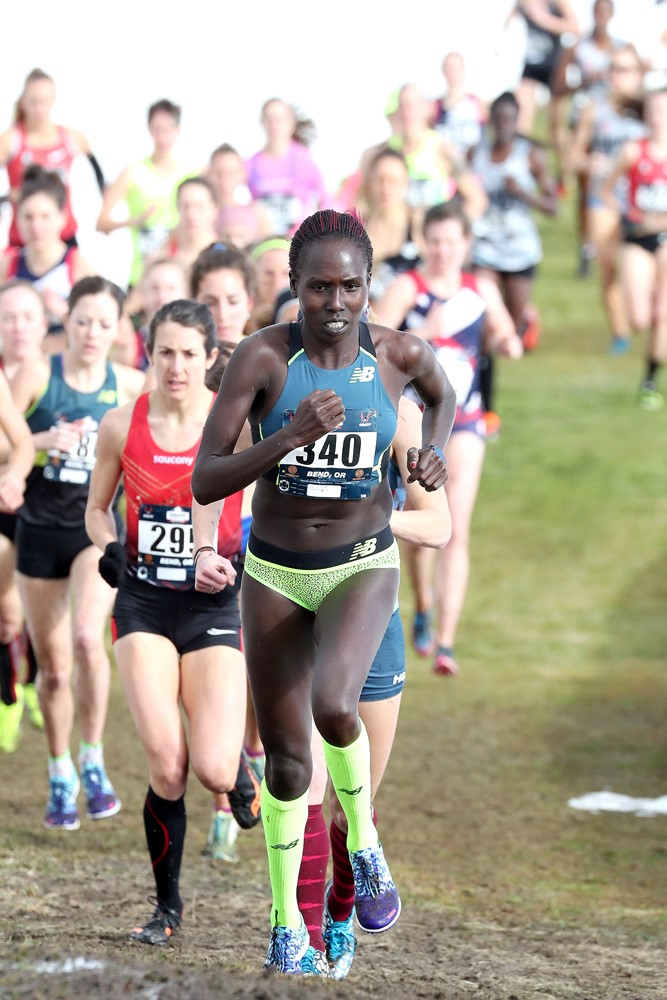 Since taking her citizenship oath 14 months ago, the native of Kenya has had ample opportunity to familiarize herself with the Stars and Stripes: The 28-year-old has won five national titles, at 5K, 20K, cross country, and twice at 25K. At the IAAF World Cross Country Championships earlier this year, she was the top American and 15th overall.

It was Tuliamuk’s ninth-place finish at that event as a junior in 2005 that helped set her life’s course. The teenager wanted to become a nurse, and top marks in Kenya’s crucial eighth-grade national exam got her into a good high school. But her parents would have had to pay for college in Kenya, draining the resources available for her siblings—31 of them, given her father’s four wives.

“When I go home to visit, all of my siblings will come over and it is like a village,” she said.

Tuliamuk’s interest in health care began with the loss of a baby brother. When she was 10, the infant took ill and her mother sent her ahead to locate a dispensary where they might get help. While mother and baby walked, the young runner sprinted ahead, first to one dispensary and then to another. They were all closed. The baby died.

After Tuliamuk’s top-10 showing at World Cross Country, the uncle who coached her started researching scholarship opportunities in the U.S. She first enrolled at Iowa State, but transferred to Wichita State for its nursing program. She soon realized that she couldn’t handle the workload, so switched to public health and earned her degree in 2013. When the chance came along for the All-American to become a U.S. citizen, Tuliamuk saw it as both a way to help her family and as “the least I could do, because I wanted to give back to this country that gave me an amazing opportunity. It’s an amazing, awesome country. I am so proud to be an American.”

Once she retires as a professional runner, Tuliamuk said, she might still seek a graduate degree in nursing. Regardless, she plans to spend more time volunteering back in Chepkaram, putting her public health degree to use exploring ways to improve access to health care.

Meanwhile, she’s putting her degree to work here as a caregiver for Comfort Keepers in Santa Fe, averaging 18 hours a week visiting the elderly in their homes to assist them with personal care or transportation.

“It really makes me happy,” she said. “It makes me feel that I am making a difference to my community. A lot of these people don’t have family around. When I am there, I am like family to them. When I’m in big races on TV, they’ll be watching and rooting for me.”

Her coach, Ryan Bolton, is all in favor. Not only does it provide balance in her life, he wrote in an email, “It’s also a very honorable thing to do and tells you a lot about Aliphine’s character.”

Tuliamuk’s elderly “family” in Santa Fe will have the chance to watch her race for the U.S. 10K title at Peachtree, thanks to a national NBCSN broadcast.

“I’ve never raced with Shalane [Flanagan] before, so that will be cool,” she said. “It will be an honor for me to run against her. If I can run half as fast as she does, I should be pretty good.”