ATLANTA – February 15, 2019 –“50 Years of the Peachtree” comes to life in a new traveling exhibit celebrating the 50th Running of the AJC Peachtree Road Race. With legends of the race and current race organizers on hand, Atlanta Track Club unveiled the display Friday morning at Lenox Square. 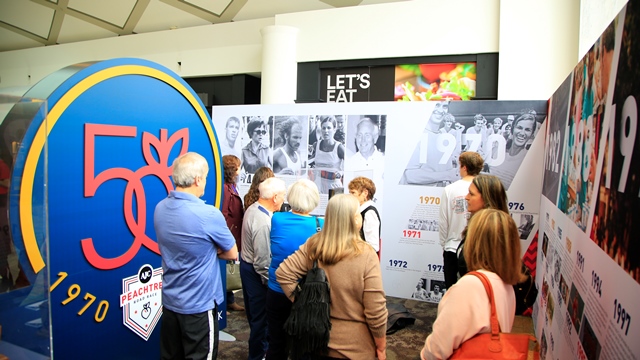 “50 Years of the Peachtree presented by PNC Bank” features an exciting timeline detailing milestone moments during each of the race’s 49 editions and biographies of some of the event’s most notable figures. It also includes rare artifacts from the Peachtree including the first winner’s trophy, the first finisher’s shirt and a pair of racing sneakers worn during the inaugural race on July 4, 1970. Visitors can take their photo in front of an eight-foot tall, three-dimensional rendering of the event’s logo.

“Ever since I started running in 2011 with my first AJC Peachtree Road Race, I’ve been hooked,” said Atlanta Track Club member George Fields who visited the exhibit for the unveiling. “This gives me all the history behind the race that I didn’t know about.”

A breaking of ceremonial finish line tape took the place of a traditional ribbon cutting as Bill Thorn, the only runner to complete every Peachtree ran through the tape which was held by long-time race director Julia Emmons and Erica Dechicchis, Client and Community Relations Director for PNC Bank in Georgia.

“It’s really awesome,” said Thorn upon seeing the exhibit for the first time. Thorn is one of five Peachtree legends highlighted on the display along with Emmons, race founder Tim Singleton and the first winners, Gayle Barron and Jeff Galloway. “I don’t consider myself an icon. I don’t know what I am. I am just a person that’s still alive and doing things that I like to do,” he said.  Thorn plans to run his 50th consecutive Peachtree on July 4, 2019.

“With 50 years, you have a lot of signature moments to choose from,” said Emmons, who led the Peachtree from 1985 to 2006 and served on Atlanta’s City Council. “It’s fun to go through and see what we have all been through together.” Emmons has traveled on July 4th since retiring 12 years ago, but said she plans to stay in Atlanta to be a part of this year’s celebration at the race.

The exhibit’s title partner, PNC Bank is the official bank of Atlanta Track Club and the AJC Peachtree Road Race. During the course of the bank’s seven-year relationship with the Peachtree, it has found new ways to enhance the participant experience at the race every year. “We see this race as an iconic event for Atlanta,” said Dechicchis. “We love the AJC Peachtree Road Race and we love the passion we see from the runners.”

Lenox Square is a fitting first home for the “50 Years of the Peachtree presented by PNC Bank.” Overlooking the mall’s main parking lot, one can see the exact spot of the race’s start line while admiring the history, legacy and people who have made the Peachtree the world’s largest and most celebrated 10K event.

“With so many impactful people and moments, its difficult to display the full 50-year story of the AJC Peachtree Road Race without taking up the length of the race itself many times over,” said Rich Kenah, Atlanta Track Club’s Executive Director and Race Director of the AJC Peachtree Road Race. “But we hope the picture we have painted here instills pride in the people who participate in the Peachtree each year and inspires new runners and walkers to be part of the movement here in Running City USA.”

From Lenox Square, “50 Years of the Peachtree presented by PNC Bank” heads to Atlantic Station March 14 - 16 for the Publix Atlanta Marathon Race Number Pickup. It then heads to Ponce City Market March 18 - 31. You can find updates on the exhibit’s times and locations by following Atlanta Track Club and the AJC Peachtree Road Race on Facebook, Instagram and Twitter.

Organized by Atlanta Track Club since 1970, the AJC Peachtree Road Race is the largest road race in the United States and the largest 10K in the world. Registration is guaranteed for Atlanta Track Club members. Non-members register via a lottery. The registration period for both is March 15 – 31. The 50th Running of the AJC Peachtree Road Race will be held Thursday, July 4, 2019 beginning at Lenox Square and ending in Piedmont Park.