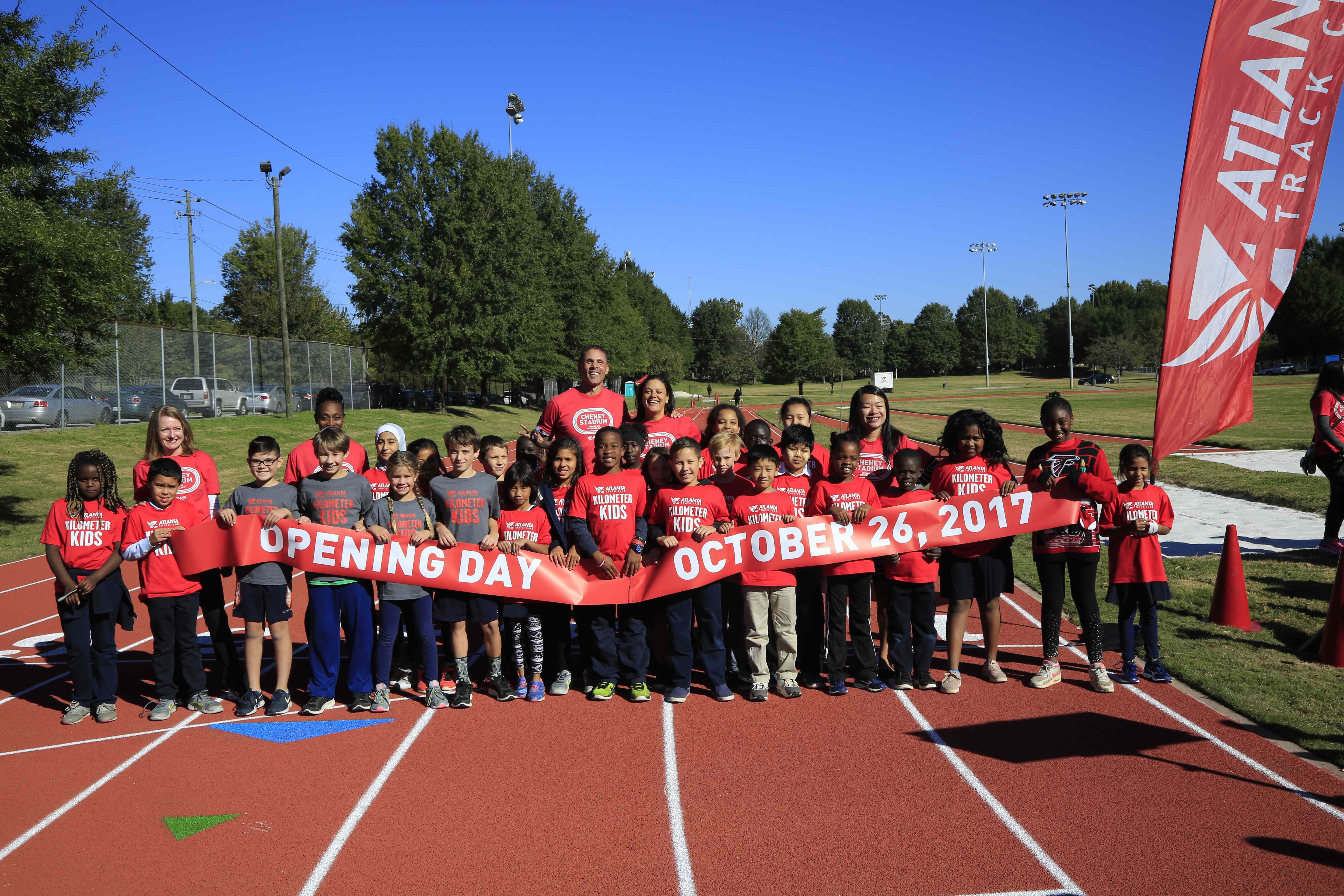 ATLANTA – October 26, 2017 – Runners and walkers in Atlanta can now train on a state-of-the-art public track with an Olympic legacy. Atlanta Track Club held a reopening ceremony this morning for Cheney Stadium in Phoenix Park, which served as the warm-up facility for track and field athletes at the 1996 Olympic Games.

“Thank you to all who had a hand in refurbishing this track,” said Devers, who took home gold medals for the 100m and 4x100m relay in the 1996 Atlanta Games. “Dreams started here for me. Cheney Stadium is a part of me, so my heart is overjoyed to see this track today.”

Cheney Stadium, which had fallen into disrepair, was revitalized in an effort to preserve Atlanta’s Olympic history while providing a resource to the running and walking community, Atlanta Public Schools and the Club’s Kilometer Kids programs. The restoration efforts followed fundraising by Atlanta Track Club and were made possible through partnerships with Atlanta Public Schools and the Atlanta Department of Parks and Recreation.

“It is exciting to see a piece of Atlanta’s Olympic history revitalized and turned into a resource for Summerhill and the entire community, including the next generation of runners and walkers,” said Rich Kenah, Atlanta Track Club’s executive director. “As we celebrate Cheney Stadium’s legacy, we also look forward to building new memories with Atlanta Track Club’s Kilometer Kids youth running program.”

Reopening events will conclude this evening with a free fun run and dash for children. On-site registration for the one mile and 50m events will be available beginning at 4:30 p.m.

Rekortan, a leading designer of track and field facilities around the globe, completed the resurfacing with its M99 surface. Beneath the track’s eight running lanes lies brand new “SmarTrack” technology that can record a distance runner’s splits as well as acceleration and deceleration for sprinters.

“Our SmarTrack technology is the most advanced timing system ever created for a track,” said Gary Wilson, Rekortan’s executive vice president. “We are delighted to bring this top-of-the-line feature to a facility with so much history and reach.”

Atlanta Track Club's 2017 Kilometer Kids Charity Chase raised funds for the Cheney Stadium restoration project. Two teams competed in a 48-hour treadmill challenge to commemorate the 48th running of the world's largest 10K, the AJC Peachtree Road Race, on July 4, 2017. The teams each had one person at a time running side-by-side on treadmills at the Peachtree Health & Fitness Expo. The public was encouraged to donate money to either Team Stars or Team Stripes as they competed to determine who could log the most miles as well as which team could raise the most money.

For more information about Atlanta Track Club and its events and programs, visit atlantatrackclub.org.