Bruce and Lagat are Peachtree Champions

ATLANTA -- July 4, 2018 -- When Stephanie Bruce crossed the finish line to win the AJC Peachtree Road Race and the
USA 10 km Championships, she shot her right fist into the air before falling to her knees in relief and exhaustion, still wrapped in the first finish-line tape she had ever broken in a national championship race during her 10-year career.

When Bernard Lagat broke his own tape soon after, he looked almost as amazed as Bruce. Despite already owning 14 U.S. titles on the track, the two-time Olympic medalist at 1500 meters had just won his first 10K and his first U.S. title on the roads. At the age of 43, he is the oldest man ever to win a USA 10 km Championships. 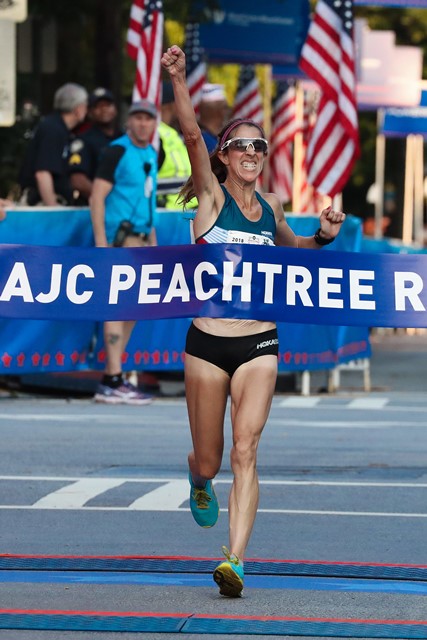 Each took home $10,000 for their savvy, tactical wins, with Lagat picking up an extra $1,500 for his master’s division win, just for good measure.

Lagat’s winning time was 28:45, with Haron Lagat seven seconds back in 28:48 and Tyler Pennel third in 28:49. Bruce won in a personal best 32:21, with defending champion Aliphine Tuliamuk second in 32:28 and Sara Hall, fresh off setting her half-marathon personal best last weekend, third in 32:41.

In the Shepherd Center Wheelchair Division, race favorite Daniel Romanchuk, 19, missed the course record by just two seconds with his 18:40 victory, while Susannah Scaroni denied Tatyana McFadden her eighth Peachtree win, crossing the line in 22:50. McFadden was just four seconds back.  The 27-year-old Scaroni (“I’ve been coming here since I was a little kid”) was competing for the 16th time.

“I was really happy with my time,” said Romanchuk, who has already broken world records at 800 meters and 5000 meters on the track this year, as well as finishing third at both the Boston Marathon and Virgin Money London Marathon. Runner-up was Josh Cassidy in 20:06.

After early leader Augustus Maiyo was reeled in by a large pack in the men’s footrace around the halfway point, Haron Lagat, Pennel, Sam Chelanga (third here last year) and Lopez Lomong took charge, with Bernard Lagat lingering in the back of the pack, letting himself get towed until around the 5-mile mark, when he moved up to join them.

Just past five miles, Pennel (“Hey, old man,” he had teased Lagat a bit earlier) made a strong move, stringing the pack out. Coming around the turn off Peachtree Street onto 10th Street, with about 1000 meters to go, it was Pennel, Haron Lagat, Bernard Lagat and Lomong, with the latter starting to fall back. 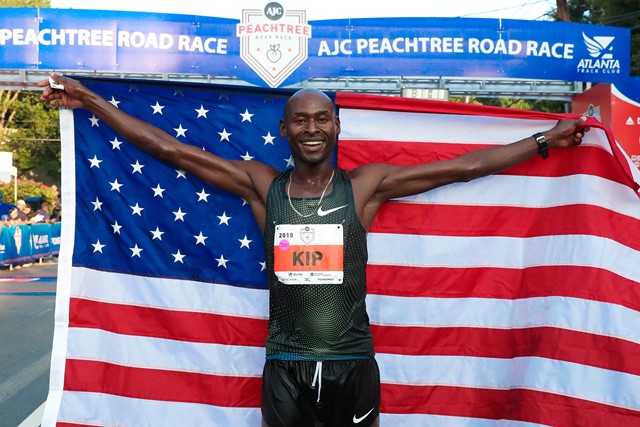 “Once we came onto 10th, I knew I was going to be third today,” said Lagat. “From fifth [last year] to third, I’m happy. Then we dropped Tyler and suddenly it was Lopez and myself. I think that gave me some motivation. I said, ‘let me stay with Lopez as long as I can.’

But Lomong, who recently won the 10,000 meters at the USATF Outdoor Nationals, faded to leave Lagat all alone up front. Lomong would finish fifth in his 10K road debut, in the same time (28:58) as fourth-place finisher Chelanga.

“I was fifth last year and I wasn’t satisfied,” said Lagat, who told the race organizers: “I’m going to come back. I want to win this.” Lagat said that he hasn’t raced since March, focusing solely on the Peachtree.

“This means so much, because it’s on July 4,” he said, calling the Peachtree “so special. There are so many guys who have won and I always wanted to be like them.”

On the women’s side, Bruce fought back tears as she posed with the first champion’s American flag of her career.

By the 5K mark, Tuliamuk appeared ready to take control of the race. Bruce bided her time about 20 meters back with Hall, Allie Kieffer and Gwen Jorgensen until Cardiac Hill. Kieffer and Jorgensen started to fall off, and although Tuliamuk was still pushing the pace she was also looking over her shoulder. She would gain a little on the downhills, but lose ground going up. Bruce and Hall ran side by side for a while, but as they neared Mile 5 Bruce began to close the gap on her own. She caught Tuliamuk at the 10th Street turn and took off from there.

“It was a long time coming,” said the 34-year-old who took a break from competition for almost 2 ½ years to have her two sons, now 2 and 4. “If you just keep believing in yourself, one day it will come true. This might be the highlight of my career so far.”

Bruce gave a special shout-out to the deep crowds lining the streets.

“This really is Running City USA,” she declared.