Coaches Learn from the Greats at Annual Clinic

The clinic, held each January, is an opportunity for high school Track and Field and Cross Country coaches from across the state of Georgia to attend seminars and workshops conducted by experts in their area of the sport, network with colleagues and attend receive required compliance updates.

“You guys are the heroes, the unsung heroes pushing these kids to accomplish their goals and their dreams,” said Gail Devers. Devers, a three-time Olympic gold medalist, was the keynote speaker at the conference. Arguable the greatest sprinter/hurdler of all-time, Devers also held a workshop on proper hurdle form to kick off the clinic on Friday evening.

Devers was not the only gold medalist on hand. Antonio McKay was on two gold medal-winning 4x400m relay teams (1984 and 1988). Now the Track & Field Coach at North Springs High School in Sandy Springs, McKay spoke to the coaches about building a championship Track & Field program. His Spartan Girls were the Class 6A State Champions in 2016. His talk touched on the importance of team building in what is often thought of as an individual sport. “One day if a kid goes pro, they can represent themselves,” he told the coaches. “Until then, put on the jersey and represent your team and program.” 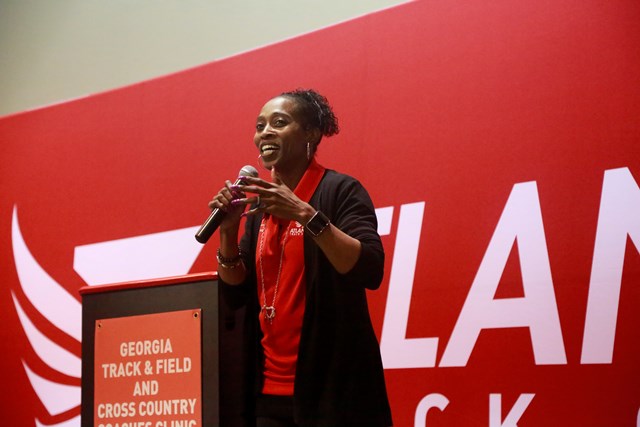 ​Brooks Johnson has been coaching Olympic sprinters since 1960. Over the weekend, he was a marathon man. Johnson, 83, was perhaps the star of the clinic, hosting back-to-back-to-back packed sessions on Friday and Saturday. The topics ranged from start technique to hurdles to the need for speed in endurance training. Known for his brash approach, Johnson didn’t mince words as he addressed the coaches who came to glean a word of wisdom from one of the most accomplished coaches of all time. At one point, he jokingly asked a veteran coach if he had ever coached hurdles before.

The clinic was not just for sprinters. Joe Franklin is the head coach of Track and Field and Cross Country at the University of New Mexico where the Lobo women have won the NCAA Cross Country title two of the last three years. Franklin shared his advice on keeping distance runners healthy through three seasons, noting that overuse injuries are rare on his squads. He also spoke about 1600m training. “To be a good 1500 or 1600 meter runner, you have to run cross country,” said Franklin to the chagrin of every middle distance runner in the room.

For field coaches, Matt Barry of Pole Vault Atlanta discussed the pole vault while Larry Satchwell of Parkview High School and Throw1Deep held sessions on throws. There were also sessions on jumps, strength training and 800m running as well coaches’ panels and question and answer sessions.

“We recognize these coaches have a great influence on the future of the sport,” said Rich Kenah, Atlanta Track Club’s Executive Director. “As they work tirelessly to teach their athletes to be the best they can be, we are proud to work alongside the GATFXCCCA to provide them with continued education and new tools to help them do their very important jobs.”