ATLANTA – March 1, 2019 -- Voting is open for the most coveted apparel item of the summer! Atlanta Track Club and the Atlanta Journal Constitution unveiled the five finalists for the AJC Peachtree Road Race T-shirt Contest Friday. The winning design will appear on the shirt handed out to the 60,000 finishers of the 50th Running of the AJC Peachtree Road Race on July 4, 2019. Everyone is invited to vote by visiting ajc.com/peachtree. Voting will remain open until March 31.

In a special contest to commemorate the milestone year for the Peachtree, the finalists consist of prominent Atlantans or Atlanta institutions. All were asked to curate a design that captures their connection to the Peachtree. A $5,000 donation will be made by Atlanta Track Club and the Atlanta Journal Constitution to a non-profit chosen by the winning designer or curator.

“We are excited to share this year’s designs,” said Rich Kenah, the race director for the AJC Peachtree Road Race and Executive Director of Atlanta Track Club. “The finisher’s shirt at the AJC Peachtree Road Race is always a tradition that tens of thousands of participants anticipate every July 4, but we know the shirt for the 50th running will be one that people cherish for years to come.”

This year’s finalists are:

Here are their designs: 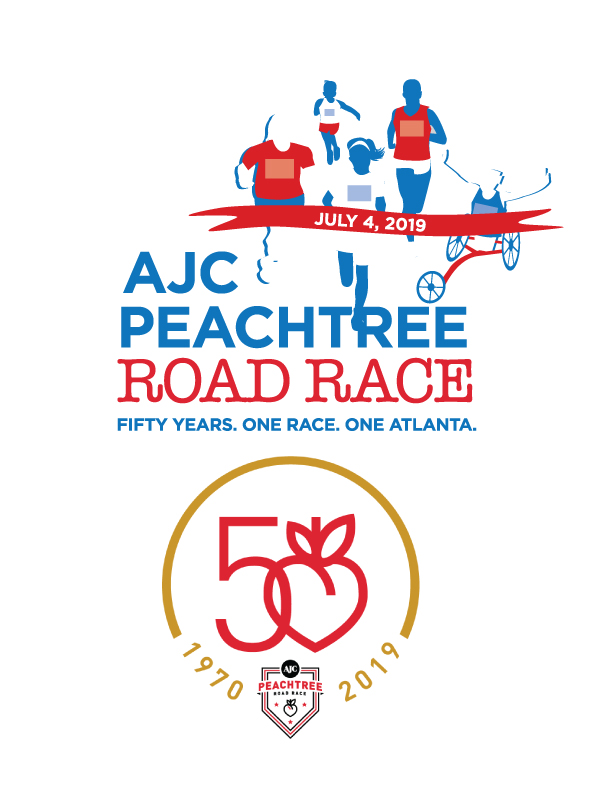 Name of Design: One Atlanta

“The rich history of the AJC Peachtree Road Race extends far beyond the start and finish lines,” said Mayor Keisha Lance Bottoms who runs the Peachtree every year. “It is my hope that our t-shirt design will celebrate the diversity of all Atlantans and mirror our goal of creating an inclusive and welcoming One Atlanta.” 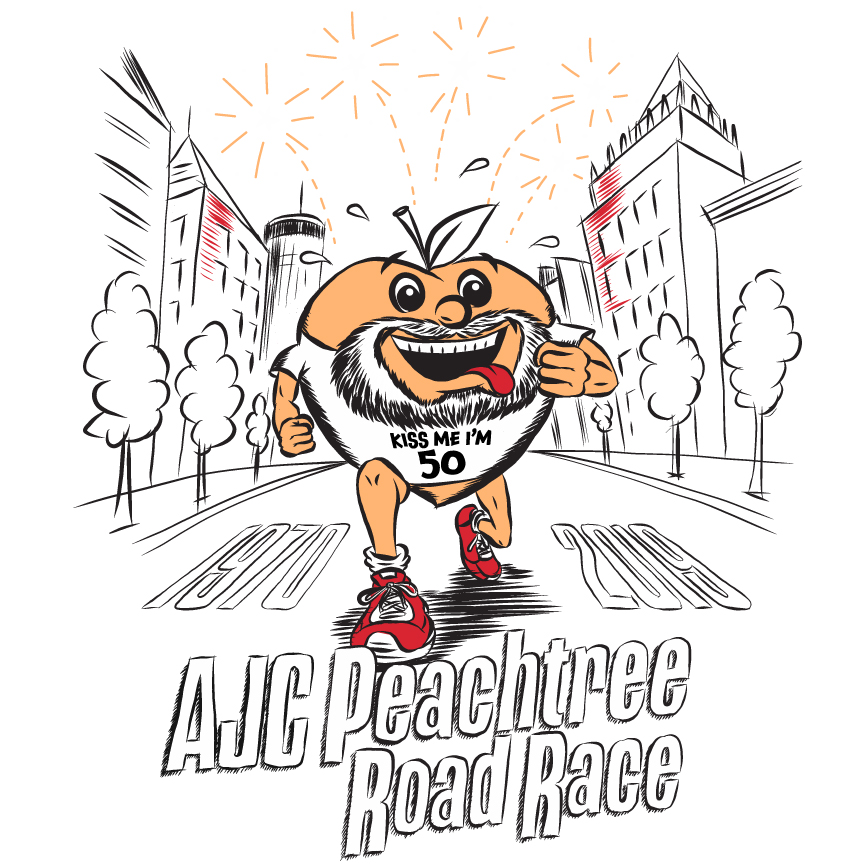 Name of the Design: 50 and Still Feelin’ Peachy

“It’s a huge honor if this is the design that's chosen,” said Insung Kim, Creative Director for the Atlanta Braves. “50 years is a long time and I think it's a great, significant marker for any event or any organization. The Braves are happy to be a part of it especially since you've got an Atlanta icon with the AJC Peachtree Road Race and the Braves as another Atlanta icon.” The Braves are at home at SunTrust Park on the evening of July 4, facing the Philadelphia Phillies. They hope you’ll be in the stands wearing the shirt they designed. 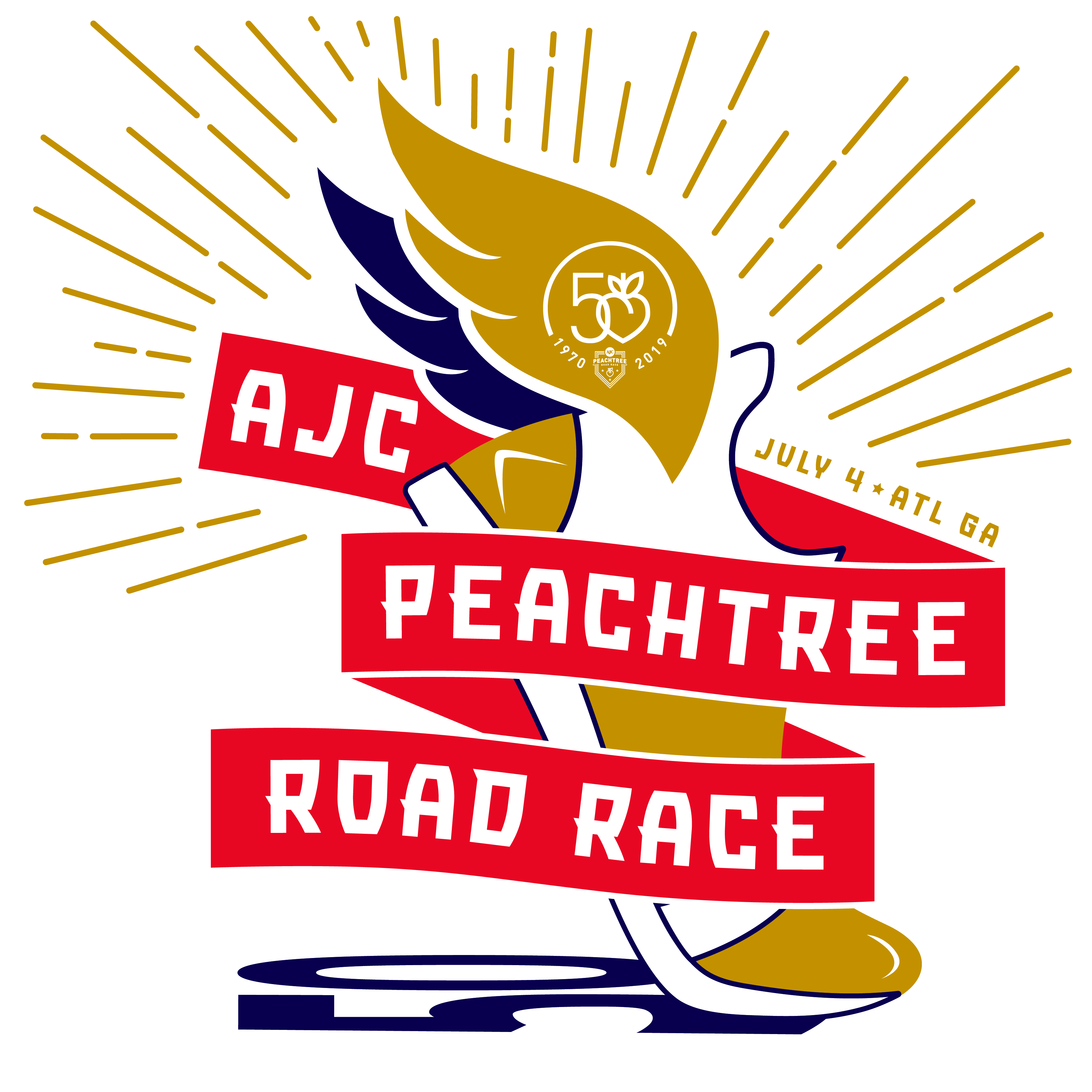 Name of Design: Celebrating Every Step

“Being born and raised in the city of Atlanta, and being a huge fan of the Atlanta Track Club ever since I was a baby bird, it would be a huge honor for my design to be chosen to represent our city, my organization, and Atlanta Track Club,” said Harry the Hawk in a written statement (because he doesn’t talk). “The AJC Peachtree Road Race is such a great 'True to Atlanta' tradition, and I am excited about taking part in this summer's race. Everyone knows I can dance and I can dunk, and now, they'll know that I can draw. This design is inspired by the very first Peachtree Road Race and celebrates the proud, final step of crossing the finish line.” 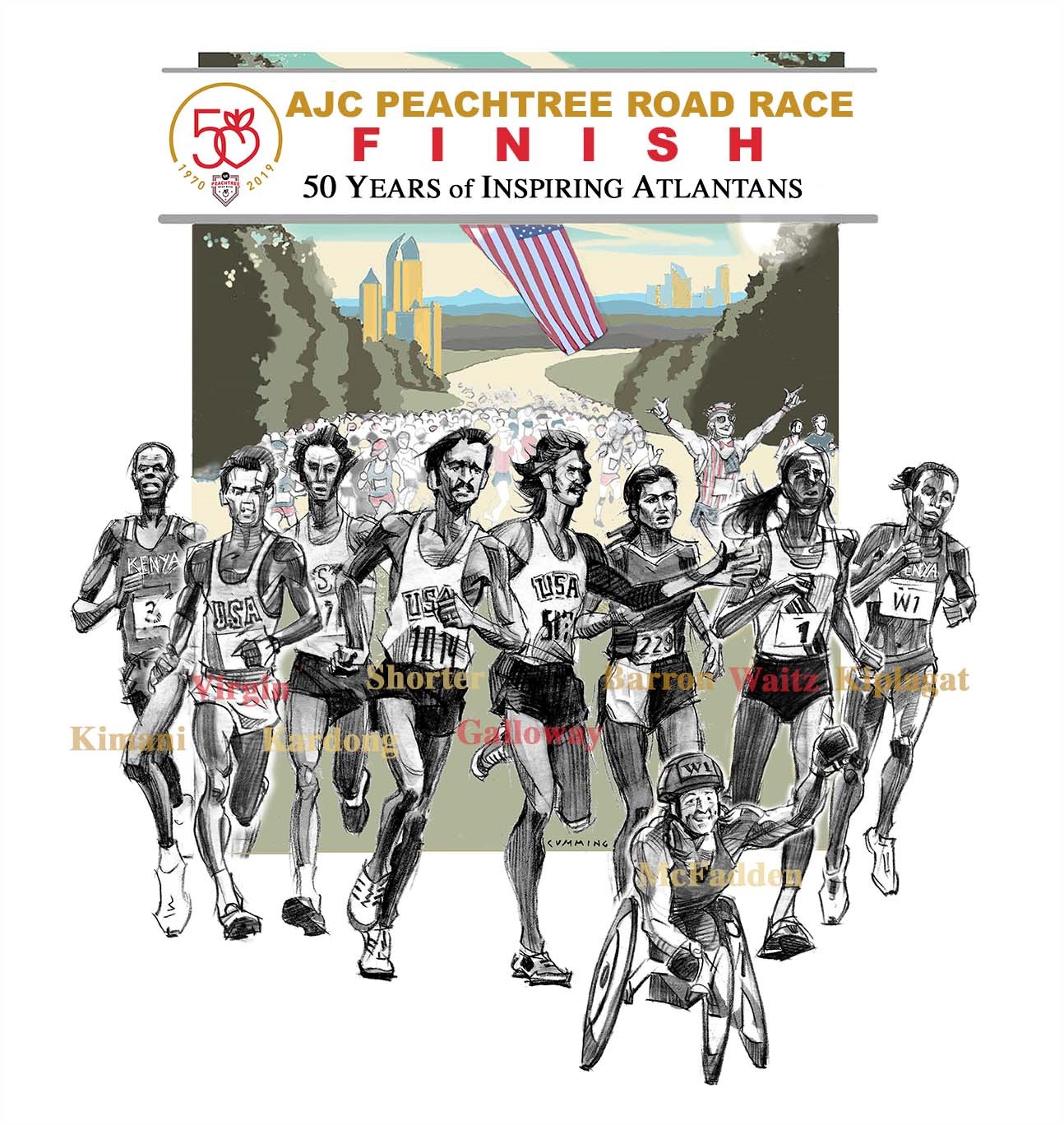 Name of Design: These Runners Made Peachtree The World’s Foremost 10K

...and inspired millions to join them

Non-profit of Choice: Piedmont Park Conservancy and Back on My Feet

"I know that I won’t win ‘The Peachtree’ again," said Galloway. "But it would be a highlight of my life to see 60,000 runners wearing the shirt design that portrays how the AJC Peachtree Road Race has inspired Atlanta and the world." 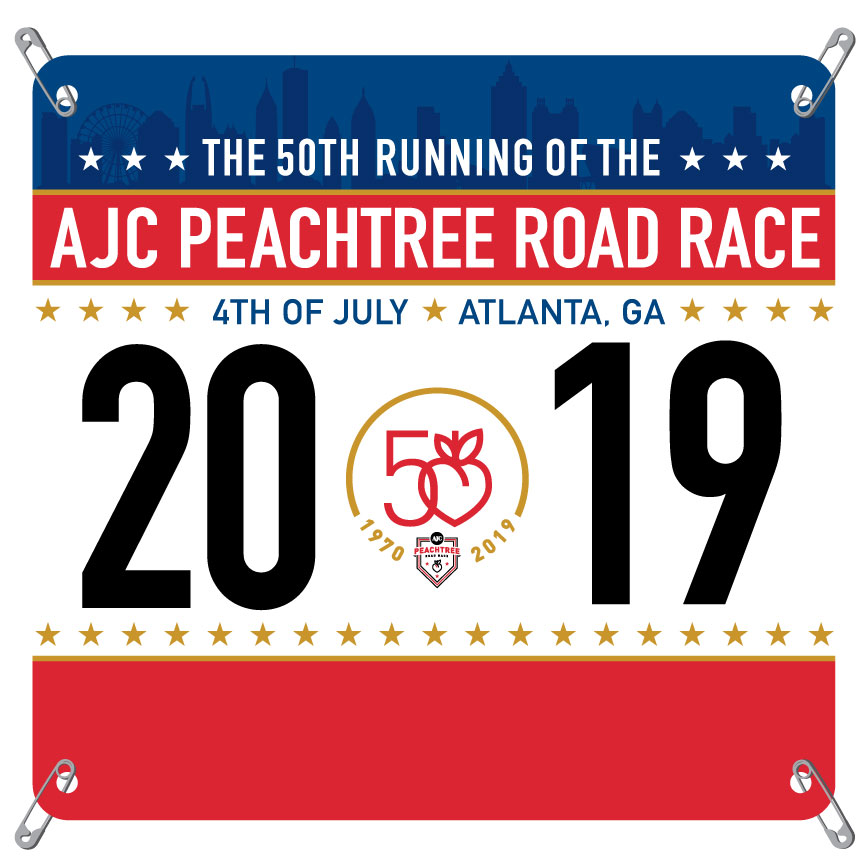 Non-profit of Choice: City of Refuge

Emily worked with her three children (Edward 15, George 15, and Harriet 11)   - all runners – to come up with the concept for this design. “Like all families, mine enjoys many special traditions on the holidays,” said Giffin. “But our favorite, by far, is running the AJC Peachtree Road Race on the Fourth of July in Atlanta, the best running community in the world!"  As an author by trade, she brought in a past champion to bring the design to life. Tina Tait, an Atlanta-based graphic designer who won the AJC Peachtree Road Race T-shirt contest in 2015, did the artwork on this entry. Just like the Peachtree, Tina is also turning 50 this year.

Held annually on July 4 in Atlanta, Georgia, The AJC Peachtree Road Race is the largest running event in the United States and the largest 10K in the world. Registration is available March 15-31 with members of Atlanta Track Club receiving a guaranteed spot. All others will be entered into a lottery. More details can be found at atlantatrackclub.org.