For Marielle Hall, Stretching is More Than a Warm-up

ATLANTA -- July 1, 2017 -- Ask Marielle Hall what she might do when she retires from competitive running and you get a glimpse of what makes her tick: probably something involving education, something community-oriented, maybe something on the creative side, maybe looking into something entrepreneurial.

Hall is among the favorites in the 48th running of AJC Peachtree Road Race on July 4. With the race serving as the 2017 USA 10 km Championships, the 2014 NCAA 5000-meter champion will be seeking her first national title even as she makes her 10K debut.  While she may be a rookie at that distance on the roads, however, she has had remarkably quick success at navigating the distance on the track, where the first three 10,000-meter races of her life, all in 2016, went like this: Olympic Trials qualifier, U.S. Olympic Trials, the Olympics.

At 25, Hall has no pressing need to think about her future beyond the next race and the next season. But contemplating the balances that equal a life well lived is as familiar to her as Mount Laurel, NJ, the Philadelphia suburb in which she grew up and still lives.

Gymnastics, dance, violin, soccer, basketball—all played a role in her childhood, even as she declared in a fifth-grade assignment that she wanted to bec 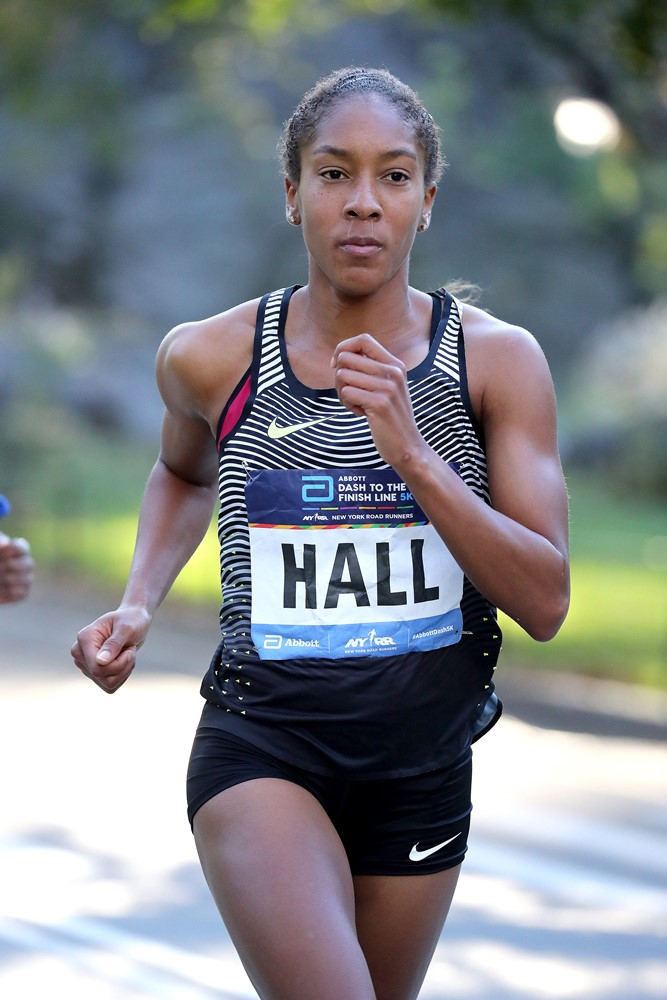 ome an Olympic runner someday. At the University of Texas, one of the top collegiate track and field schools in the country, she chaired the university’s chapter of Students for Education Reform, which advocates for equal opportunity in K-12 public schools, and found time for three weeks in Peru as part of programs in community engagement and Spanish immersion.

“Running is a global sport, and in our competition we face a lot of athletes that are working for different reasons than just running to get a record or running fast, but dealing with situations that hold much more magnitude,” she said. “I just felt personally felt like, if you want to be better, you have to search for those lessons that go outside the day-to-day. If you want to be a better athlete, be a better person. I was stretching for more experiences that could give me a better perspective.

Had the opportunity to run professionally not come along right out of college, Hall likely would have brought her degrees in government and business administration back to the Philadelphia area to participate in Teach for America.

Instead, she packed up her new pro contract and returned to her high school coach, Derek Thompson. In his Juventus (Greek for “the youth”) Track Club, she trains alongside 2016 Olympian Ajeé Wilson and Charlene Lipsey, who since joining last year has joined Wilson as one of the top 800-meter runners in the country.

Even that brings lessons that go beyond spikes and split times. Seeing how the two go through each day, working together and leaning on each other for the betterment of both, has been empowering. They’re runners, but that’s almost an aside for Hall: If someone excels at something, she wants to be there soaking it in.

“If you’re a really good artist, doctor, lawyer … I feel I could learn from that. The biggest challenge of running, especially if you continue to compete at a high level, is figuring out the secret sauce that’s going to help you get the best out of yourself.

“Everything is interesting to me, I guess.”