Westlake High School senior Kennedy Simon was named the Most Outstanding Track Athlete. Simon, the 7A State Champion in the 400 meter dash received the award which is given annually to the top female high school track athlete in the metro-Atlanta area. Her time of 52.52 was the third fastest in the United States in 2018 and the third fastest time ever run by a high school student in Georgia.

“I just focus on what I gotta do to get the job done,” Simon told Lewis Johnson of NBC Sports, the banquet’s host. “Be patient. Stay focused. I guess that’s one of the most important things.” Simon plans to attend the University of Texas next year. 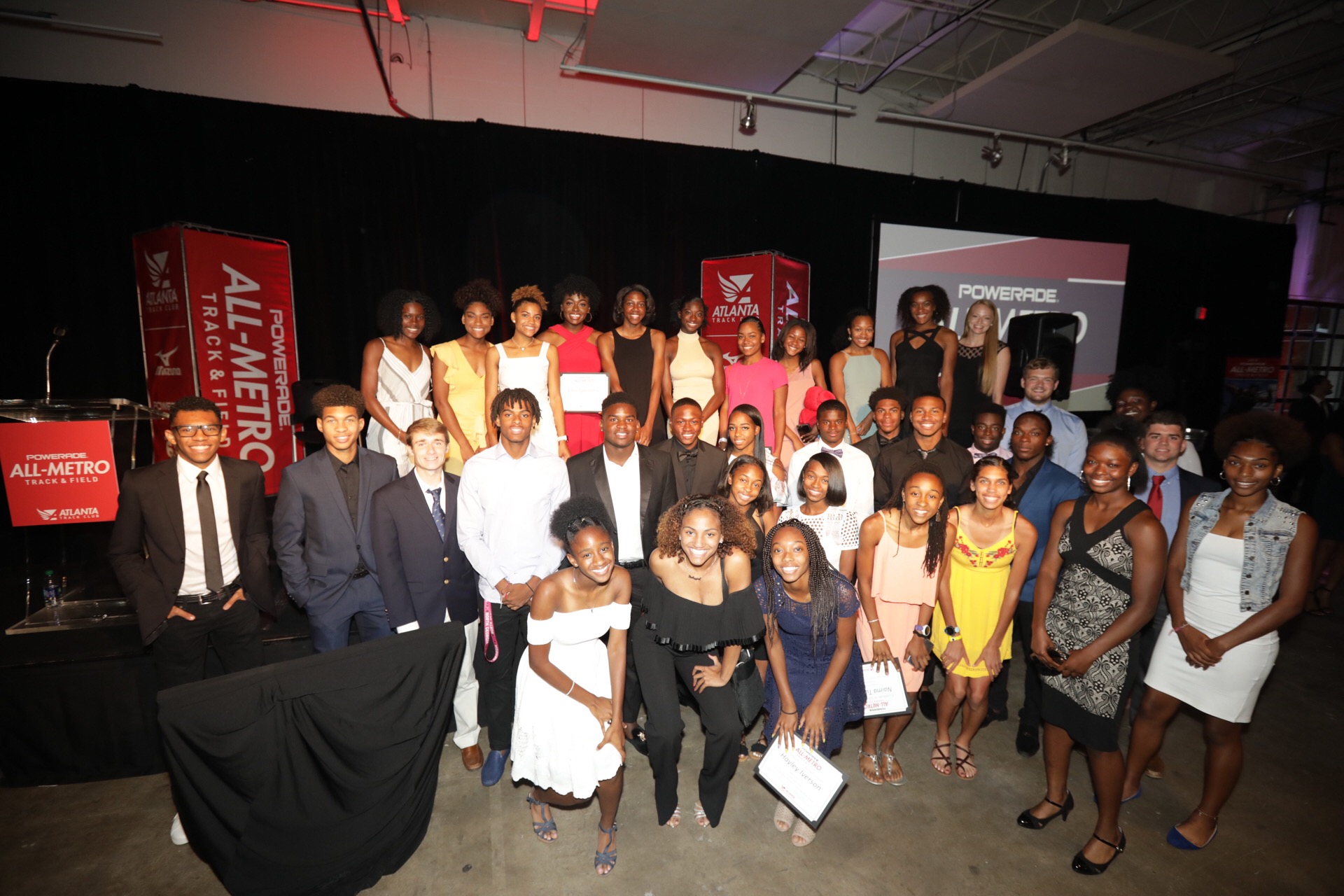 ​Parkview High School Senior Justin Long was named 2018’s Most Outstanding Track Athlete. He was the 7A State Championship in the 200 meter dash and 400 meter dash. Long’s time of 46.14 in the 400 meter is the fourth fastest time ever run by a Georgia High School student.

Long told Johnson he applies the lessons of track and field to his studies. “I use it to push me in the classroom and in the harder things in life.  I just push through it til I get to a better place,” Long said. Long, who will attend Oklahoma State University next year, was also named to the All-Metro 4x100 meter relay team.

Kimberly Harris of Buford High School was named the Most Outstanding Female Field Athlete. The 5A state champion’s season best long jump of 20’ 2.5” was the fourth best long jump in the United States in 2018.

“For me to be honored like this is a really big deal because I never really thought I’d be this high up for long jump,” said Harris. A versatile athlete, Harris was also the fifth fastest 400 meter runner in the country this year and was named to the All-Metro 4x100 meter relay team.

Tanner Duffin, a junior at St. Pius X, was named the Most Outstanding Male Field Athlete. The discus thrower’s personal best throw of 203’ 8” was a state best in 2018 and more than ten feet further than the next best mark.

“I love doing this. Even if I wasn’t good I’d still love doing it.” Duffin said. “I always want to be the very best I can be.”

All Most Outstanding Athlete honorees receive a $1,500 scholarship from Atlanta Track Club. “We live our lives through dreams and the work that it takes to get to those dreams,” Johnson, who broadcasts Olympic sports including track and field, told the athletes. “Enjoy this part of the journey because it is going to be something you remember for a long time.”

Atlanta Track Club’s Powerade All-Metro Track & Field Banquet recognizes the best athletes from the 12 county area. This year, 49 athletes from 27 schools were honored. Athletes are selected selected based on criteria including season bests, their performances at major meets throughout the season, and their finishes at the GHSA State Championships. The community and coaches then vote online for outstanding male and female track athletes and most outstanding male and female field athletes.