ATLANTA – JULY 3, 2018 -- “Today we are declaring for the first time that Atlanta is Running City USA,” said Atlanta Track Club board chair Shawn Hardister in opening the press conference celebrating the 49th running of the AJC Peachtree Road Race. “We don’t just host the largest road race in the United States – we have a year-round vibrant running and walking community that is spurring the development of more paths, parks and greenways in our city.”

The rap star, who calls Atlanta home, will be running with Mayor Keisha Lance Bottoms to raise $1 million for youth via his Street Dreamz Foundation, the Mayor’s Youth Scholarship Program and Atlanta Track Club’s Kilometer Kids program. It will be his first 10K race.

“It’s definitely a challenge,” he told the gathering of media and elite athletes. “I wanted to do something positive for the community. This is Atlanta. This is about bringing everyone together and doing things as a big community. We’ve got one of the best cities in America and I’m going to do anything to support that. A lot of guys that follow me and listen to my music are probably going to see if I’m going to finish, and I am going to get some pointers from these guys here.”

Two-time Olympic medalist Bernard Lagat, among the athletes here to compete in the USA 10 km Championships, was glad to oblige, joining Jeezy on stage to offer some pointers. 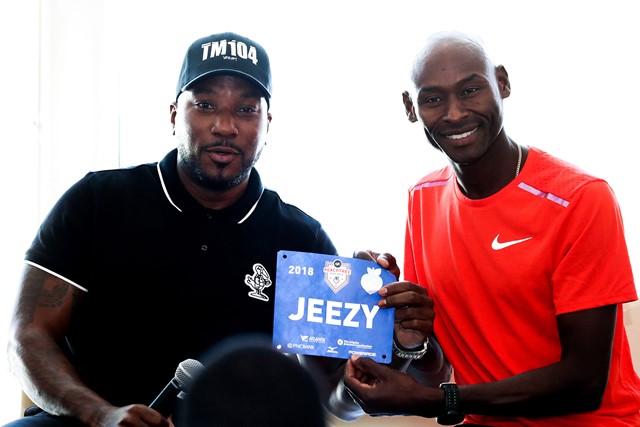 “What you have to do,” joked Lagat, who last year smashed the master’s record here, “is take off and go as hard as you can.”

For the elite athletes, the Peachtree is serious business. Returning to defend her title as the 2017 Peachtree and USA 10 km champion is Aliphine Tuliamuk, seeking her 10th U.S. title since becoming a U.S. citizen in 2016. Asked if she had the same closing speed she used last year to close out her victory here, she replied simply: “Yes.”

But Peachtree can also be joyous, even to the athletes with a first prize of $10,000 at stake. “I have been a citizen for a little over two years, and my second Fourth of July was here last year, and it was really emotional I won a few U.S. championships, but this was a little different. At the finish line I teared up a bit, because there were so many more people crossing that line,” she said, of the 60,000 runners behind her.

In what Tuliamuk herself called one of the strongest fields she has run in lately, her challengers will include Sarah Pagano, who has finished second the past two years in the 10 km championships; Sara Hall, who finished second here in 2014; and Gwen Jorgensen, the 2016 Olympic triathlon gold medalist-turned-2020 marathon hopeful who is making her U.S. 10K road debut here.

“I’m excited to go out there and just put myself in the race, hopefully,” said Jorgensen, whose 10K personal best is second only to Tuliamuk’s in the field.

On the men’s side, two-time Olympian Lopez Lomong, fresh off his surprise 10,000-meter victory at the USATF Outdoor Nationals on the track, will be making his 10K road debut against a veteran lineup that includes Lagat; last year’s third-place finisher, Sam Chelanga; Tyler Pennel, who has twice been runner-up here; and reigning USA Half Marathon champion Chris Derrick.

“I remember clearly that last stretch and Chris Derrick really had no mercy on me,” said Lagat.

“I wanted it way more than he did last year,” Derrick explained wryly. “He was like “I’m a five-time Olympian, this is for fourth place, it’s fine,’ and I was like ‘He’s 42 years old … it’s my turn. I tore a piece of my soul out to beat him last year.

Lomong listened intently. “I’m not a 10K runner,” he said. “These guys are very good. I have no idea what’s going to happen tomorrow. I’m just going to follow and join with 60,000 amazing people toeing the line to run the streets of Atlanta, so I’m happy.”

And when it comes to Jeezy, even the elites are excited to see him in the race. When 2016 Olympic marathoner Jared Ward found himself without a bib at the press conference, he asked: