ATLANTA - July 4, 2017 - It was a Grand Old Flag indeed for two new American citizens at the finish line of the AJC Peachtree Road Race, as Leonard Korir and Aliphine Tuliamuk won the 2017 USA 10 km Championships in similar patriotic spirit but in very different styles.

For Tuliamuk, the race was wrapped up early, her winning time of 32:49 putting her 12 seconds clear of runner-up Sarah Pagano. But Korir would team up with training partner Shadrack Kipchirchir to provide some fireworks with a wild sprint finish, Korir prevailing in 28:16 to Kipchirchir’s 28:17.

“I think he wanted to win, too, but you know what? The finish line is over there and they say it’s for anybody who gets there first,” said Korir.

For Tuliamuk, the race was put away much earlier on the course. A 5:05 second mile left only six women in a lead pack controlled by the 28-year-old from Santa Fe, who then led a charge up Cardiac Hill before surging just over the crest and leaving rivals Marielle Hall, Jordan Hasay and Sarah Pagano to fall in behind, with Jess Tonn and Susannah Sullivan dropping back. By Mile 5, Tuliamuk was on the way to winning her sixth USA title since becoming a citizen last year. Pagano would pass Hasay for second just after the turn onto 10th Street, less than a half mile from the finish alongside Piedmont Park.

“There is nothing better than getting a flag on America’s birthday,” the native of Kenya said as she charmingly posed for photos with volunteers while awaiting a TV interview, dripping with sweat but otherwise looking fresh. “This will be the most memorable flag I have.” 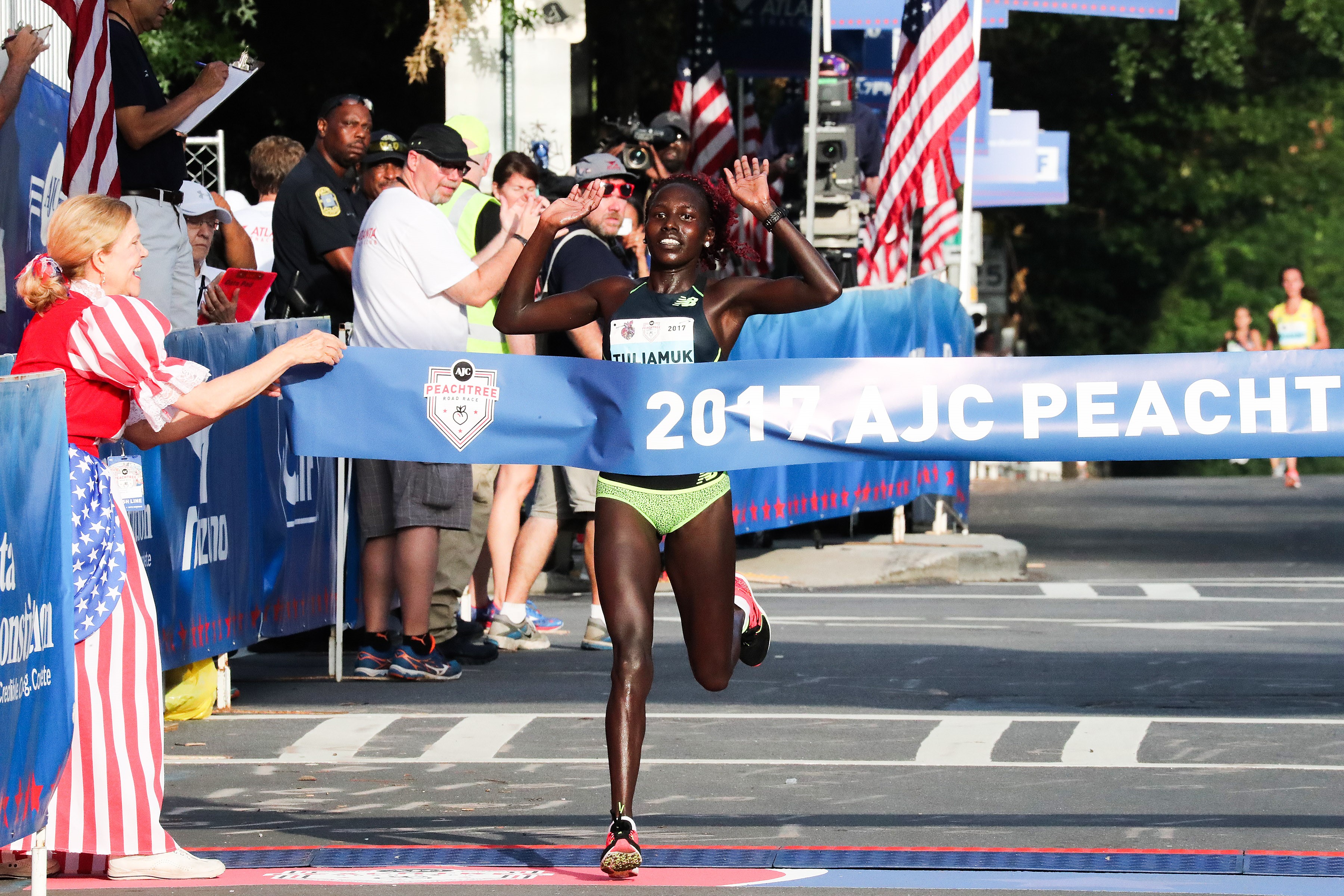 Korir, on the other hand, would melt to the ground just after breaking the tape, his checking account clearly overdrawn on a hot, humid day that saw the race begin under a Red Alert (“conditions could be dangerous and runners may need to slow down or consider stopping”). A full two minutes went by as he recuperated on the pavement.

“He pushed me to my limits,” said Korir. “I would say this is the toughest run in my career. They made it tough on me today. It was painful from the beginning.”

Thanks largely to the front-running of Chris Derrick, who would finish fourth, the pack went through Mile 1 in 4:28. At the midway point, a pack of six was led by Derrick, Korir and Jon Grey, but Kipchirchir and Sam Chelanga were both right there. With about 600 meters to go, Chelanga surged to break the pack, with Korir going with him and Kipchirchir right behind, the three forming a synchronized triangle before Kipchirchir move up to join the others. Korir and Kipchirchir, teammates in the Army’s World Class Athletic Program, then left training partner Chelanga behind as they dueled to the line.

“I wanted to win so bad,” said Kipchirchir, who has finished as runner-up in at least four USA championships in the past 18 months. “I wanted to break him, but he wasn’t breakable.” 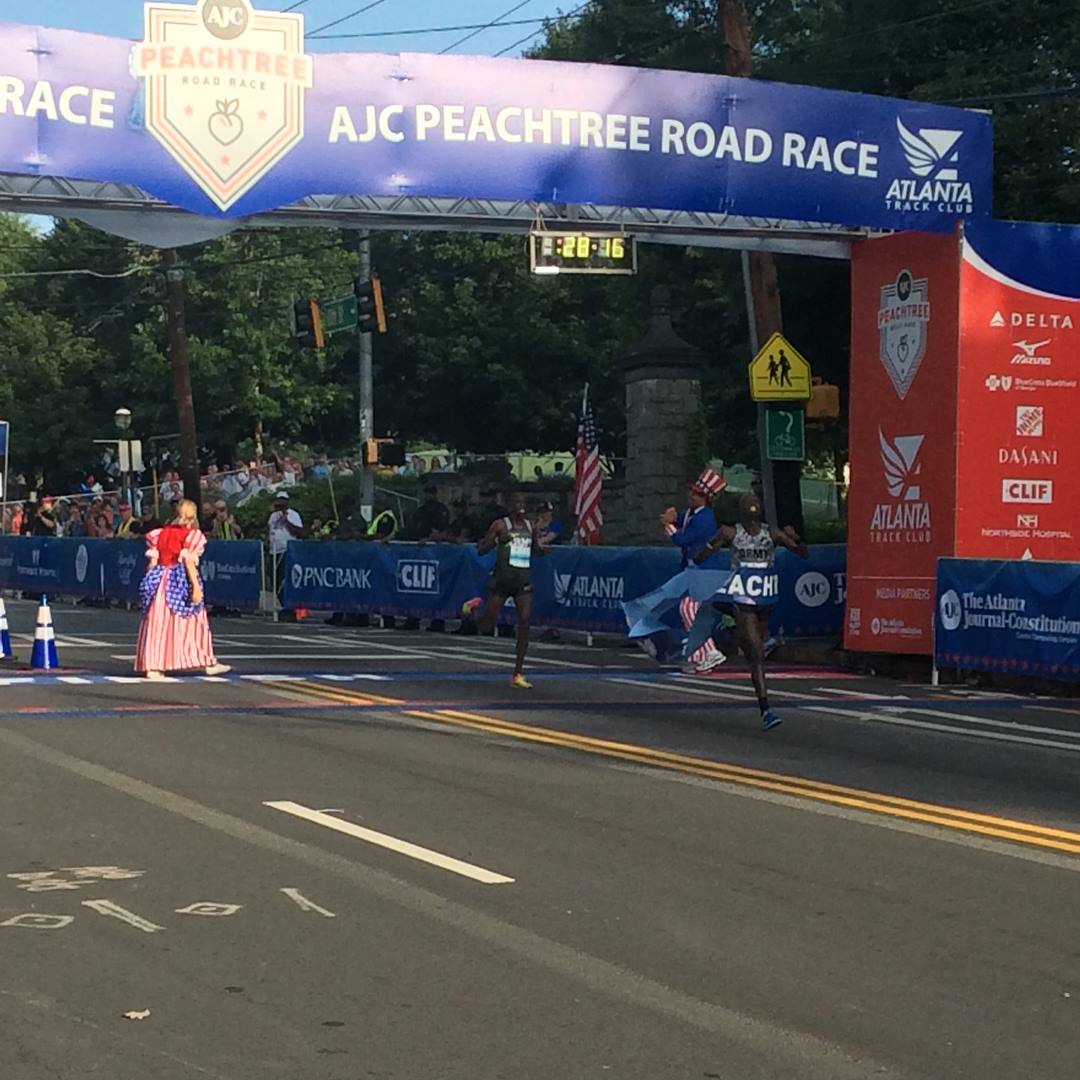 In the Shepherd Center Wheelchair Division, Tatyana McFadden marked her return to racing after being felled by blood clots this spring with her seventh victory here in as many tries, going wire-to-wire for a victory in 24:17. For the men, 18-year-old Daniel Romanchuk, who won the Junior Peachtree last year, bested a field of elders to win in 20:02.

“I felt really good out there today,” said McFadden, who hasn’t raced since finishing fourth in the Boston Marathon last April. “This really was a good test for me to see how everything is going.”