Membership renewals open on November 1, and members can expect a familiar registration process through the Chronotrack platform. “If you remember signing up last year, it will be virtually the same,” said Meaghan Leon, Atlanta Track Club’s membership manager. Members must renew their membership by February 1, 2018 to receive guaranteed entry into the 2018 AJC Peachtree Road Race. All members will receive an Atlanta Track Club Mizuno T-Shirt. You can go to this page beginning on November 1 to renew your membership.

Members will enjoy added member benefits that have been rolled out during 2017. In an effort to ensure the safety and well-being of all participants, volunteers and spectators, Atlanta Track Club has partnered with Project S.A.V.E., a Children’s Healthcare of Atlanta program. Project S.A.V.E.’s mission is to promote prevention of sudden cardiac arrest through awareness, education and promotion of CPR/AED education. “We want to provide the running community with the training they need should they find themselves near someone experiencing cardiac arrest,” said Sue Payne, Atlanta Track Club’s director of community outreach and membership. “There were two cardiac incidents at our events this summer. Fortunately, both lives were saved, but those frightening moments highlight the importance of this initiative.”

Beginning in 2018, CPR training, AED training, and first aid training will be available both in person and online. Details will be listed in an upcoming member newsletter.

Perhaps the most anticipated announcement at Tuesday’s town hall was the unveiling of Atlanta Track Club’s 2018 events and program schedule.  Notable changes include the absence of the Peachtree City 15K & 5K and the addition of a 12K on Atlanta’s south side. “Our members let us know they really want us to do a race in South Atlanta,” said Director of Events Lisa Tanner. “We are excited to work with South Fulton Running Partners and other organizations and runners to bring those ideas to life.” The location of the event has not been chosen, but it will be held on February 17 and included in the Grand Prix Series presented by Piedmont Healthcare. Tanner expressed gratitude to the Peachtree City Running Club for their years of partnership on the Peachtree City 15K & 5K.

Other changes in 2018 include:

You can find the entire 2018 schedule along with the calendar for the Grand Prix presented by Piedmont Healthcare and the Kilometer Kids Youth Running Series by clicking here.

Director of Finance Chris Dierkes provided an update on Atlanta Track Club’s strategic plan for 2018-2020. The strategic planning committee of Atlanta Track Club’s board of directors began the process by collecting survey information from the membership. That data was then used to create an opportunity analysis and to draft a strategy matrix. The board and staff then created goals, tactics, objectives and performance measurements. “It’s important that everything in this plan ties back to our mission and our core values of community, camaraderie and competition,” said Dierkes. The board will now begin the process of reviewing and finalizing the plan.

Finally, Executive Director Rich Kenah detailed the progress at Cheney Stadium. The former warm-up facility for track and field events at the 1996 Olympic Games is nearly ready to re-open to the public. Thanks to generous donations from Atlanta Track Club members and partners, the track has been resurfaced by Rekortan, a leading maker of track facilities around the world. “Our members always tell us that they have no track to run on in Atlanta,” said Kenah. “The gates to Cheney Stadium will remain open for everyone in the community to run, throw and jump.” A formal announcement on opening of the track is coming later this month. Donations are still be accepted by texting “KKCC” to 444999 or by clicking here. 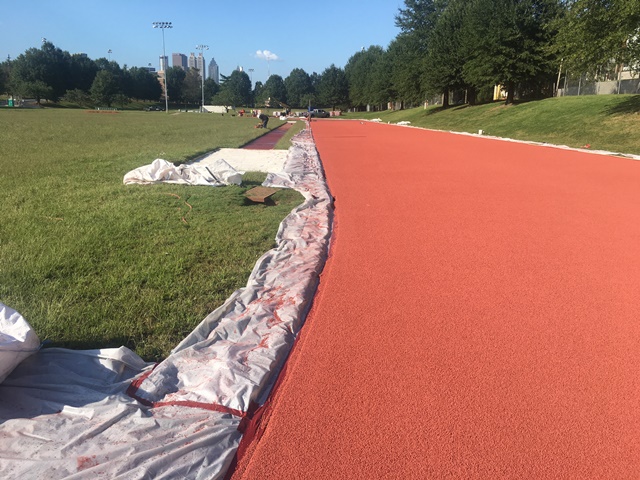