ATLANTA – March 2, 2019 – One year before the race that will select the 2020 U.S. Olympic Marathon team, more than 100 Olympic hopefuls lined up in downtown Atlanta to race for the first time on the course for the 2020 U.S. Olympic Team Trials – Marathon. Atlanta Track Club, which will serve as the Local Organizing Committee for the Trials hosted Road to Gold: An Atlanta 2020 Test Event Saturday. The race was an opportunity for Trials qualifiers to preview the course and for the Club to test timing, hydration and other logistical operations that will be necessary for the race next year. The eight-mile race that covered the final loop of the Trials course was won on the men’s side by Brogan Austin (West Des Moine, IA) in 38:07 and on the women’s side by Amy Cragg (Portland, OR) in 43:23.

Cragg, the 2017 IAAF World Marathon Championship Bronze Medalist, was in front and in control from the gun, opening up a commanding 25-second gap by the second mile. The Bowerman Track Club standout was unchallenged from there, as she ran completely alone for the final six miles, pushing hard along the streets of Atlanta that will determine the six Americans heading to the Tokyo Games. 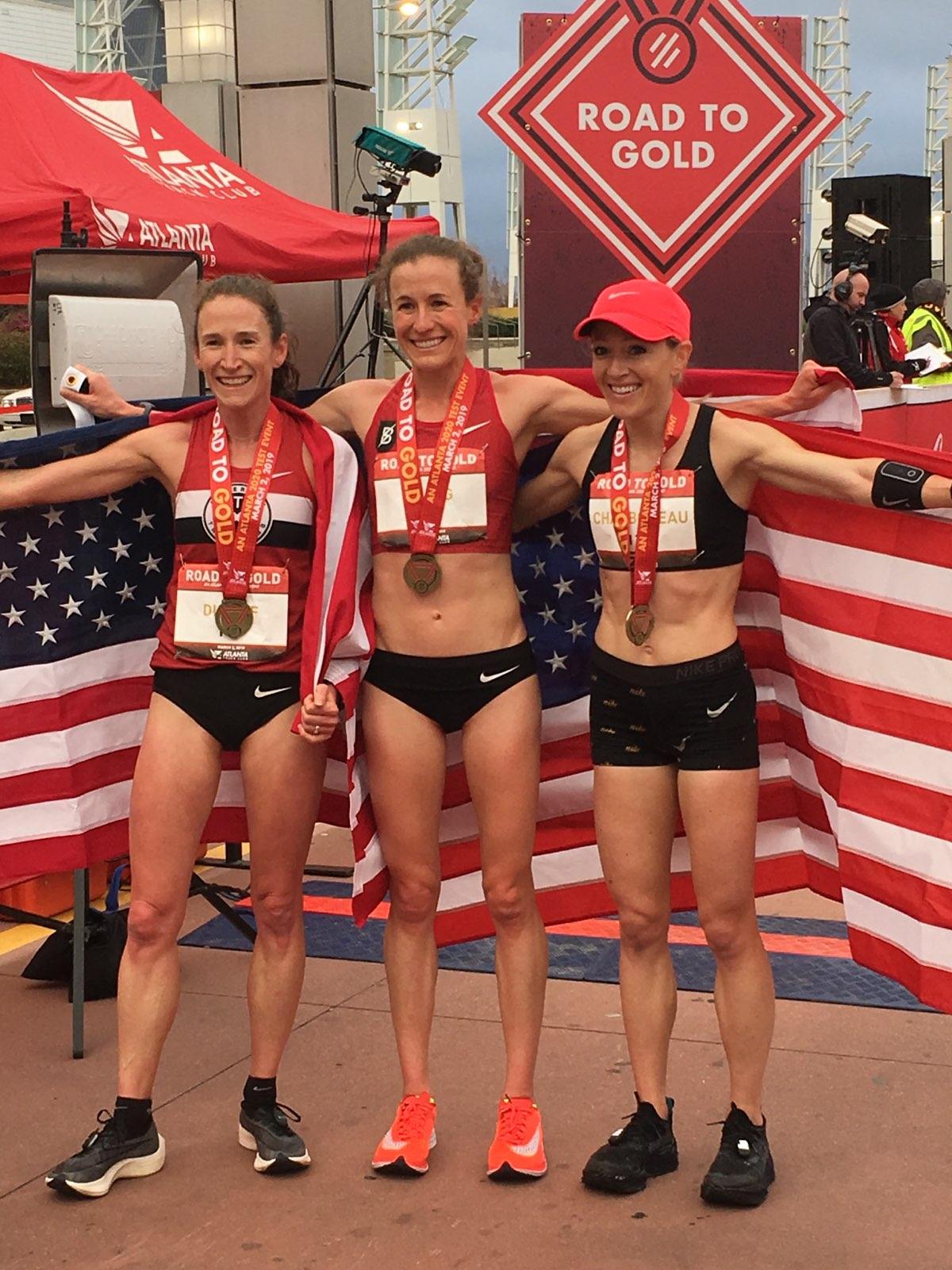 “It was a little bit [tough],” said Cragg about taking on the challenge of grinding out the final miles on her own. “I wasn’t sure exactly where to push. But I think if I did it again I could run a lot faster. I’m really glad I did it for next year.” Cragg won the 2016 U.S. Olympic Team Trials – Marathon and looks to become the first woman to win back-to-back marathon trials.

Behind Cragg was her Bowerman Track Club teammate Carrie Dimoff (Portland, OR), who finished in 44:24, followed by Brittany Charboneau (Golden, CO) in 44:32.

The competition was tighter in the men’s race, with a handful of top runners opting to push the pace and test out running hard along the course. About halfway through the race, a three-man pack of Austin, Jared Ward (Mapleton, UT) and Parker Stinson (Boulder, CO) began to separate themselves from the pack. The three ran together for the majority of the next three miles, before Austin made a late surge to break away and take the victory by 10 seconds over Ward, a 2016 Olympian.

“Overall I felt better than I was expecting,” said Austin, the 2018 USATF Marathon Champion. “I wasn’t expecting a lot going into the race. It was more to come in today and get a gauge of what the course was like and run against some people I’ve never run against before. But I came away with a win so that’s super exciting.” 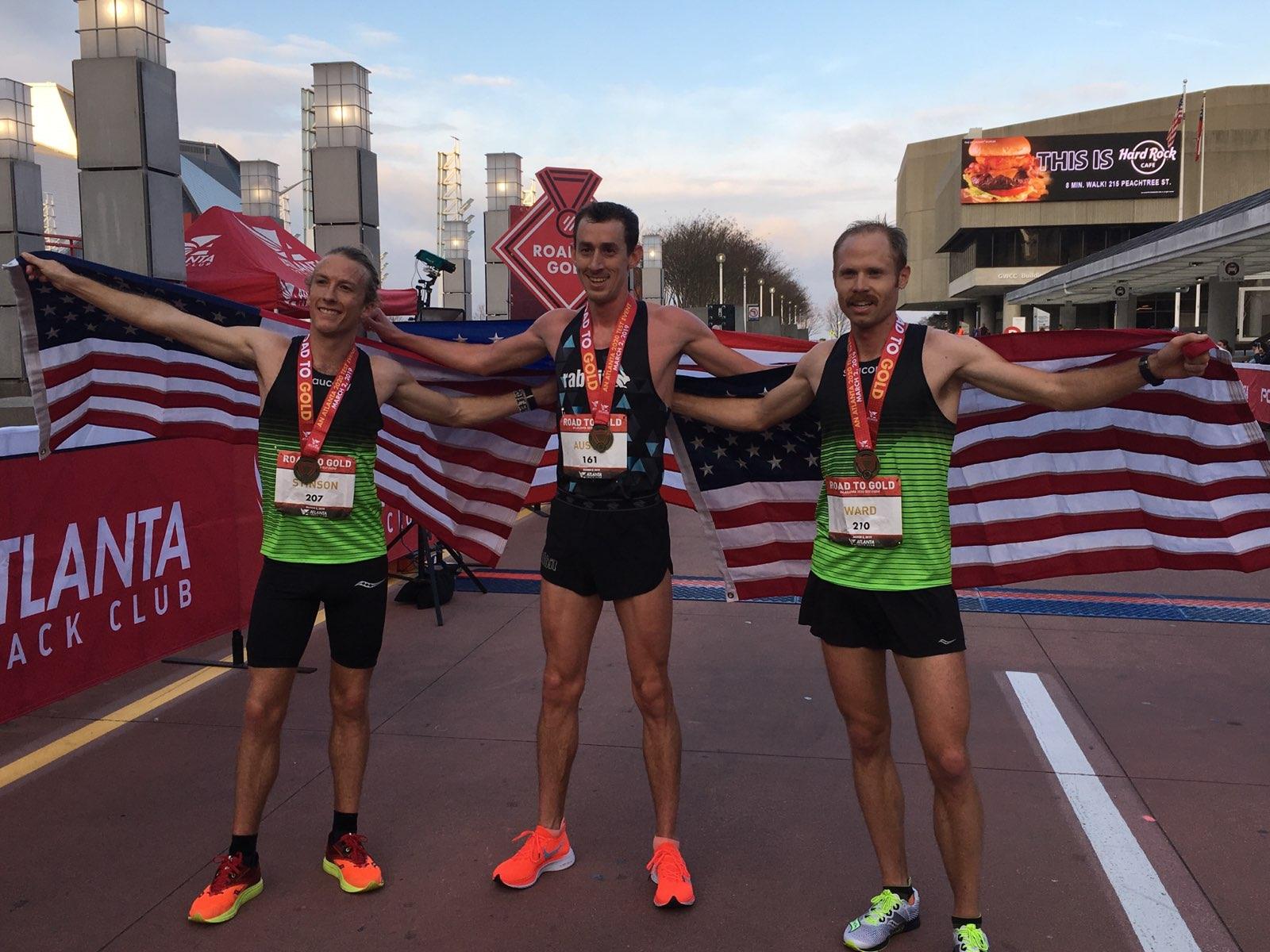 Starting 10 minutes after the Olympic Hopeful Division, more than 2,000 people competed in the Open Division of the race, which gave local runners the opportunity to get a feel for the course that America’s top marathoners will take on next February. The men’s division was won by Gabriel Lara (Smyrna, GA) in 43:26, while the women’s was won in 49:43 by Jamie Hershfang (Chicago, IL).