ATLANTA -- July 3, 2017 -- When the 48th running of the AJC Peachtree Road Race kicks off early on the morning of July 4, an elite field of 33 men and 26 women will be vying for victory, but don’t think they aren’t aware of—and impressed by—the 60,000 runners behind them.

“I have utmost respect for the people who work 9 t 5 and they still find time to go out and train for a race like Peachtree,” said Bernard Lagat, the five-time Olympian and two-time Olympic medalist, at the pre-race press conference Monday morning. “It is amazing to me that we are in a mix of everybody.”

Kicking off the press conference, held on the track of the indoor practice facility at Atlanta Track Club headquarters, board chairwoman Mary Ford foreshadowed Lagat’s sentiments by telling the gathered media that the event, the world’s largest 10K and the largest road race in America, “is an Atlanta tradition, a July 4 tradition, a family tradition and it has also turned into something that has become a bucket list race for runners around the country and around the world.”

This year, it is also the USA 10 km Championships for both men and women.

“We felt as if, in the 48th running, we wanted to again celebrate our American stars here in Atlanta,” said Rich Kenah, race director and executive director of Atlanta Track Club. “There is no better place to do it and no better day to do it than the Fourth of July.  So our winners this year will not only be our Peachtree champion, but our U.S. national champion.” The winners will each receive $10,000. 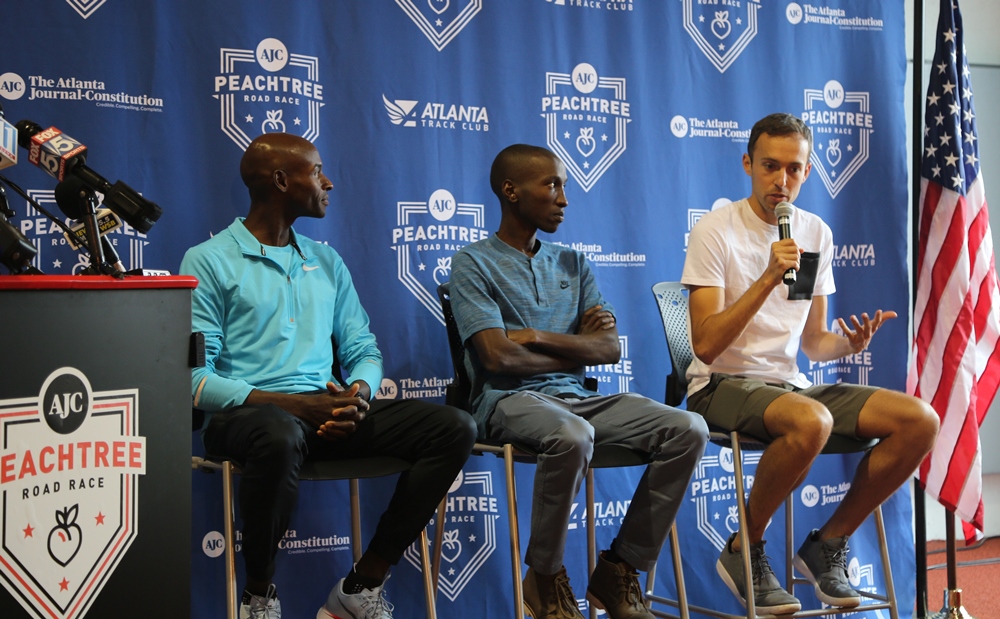 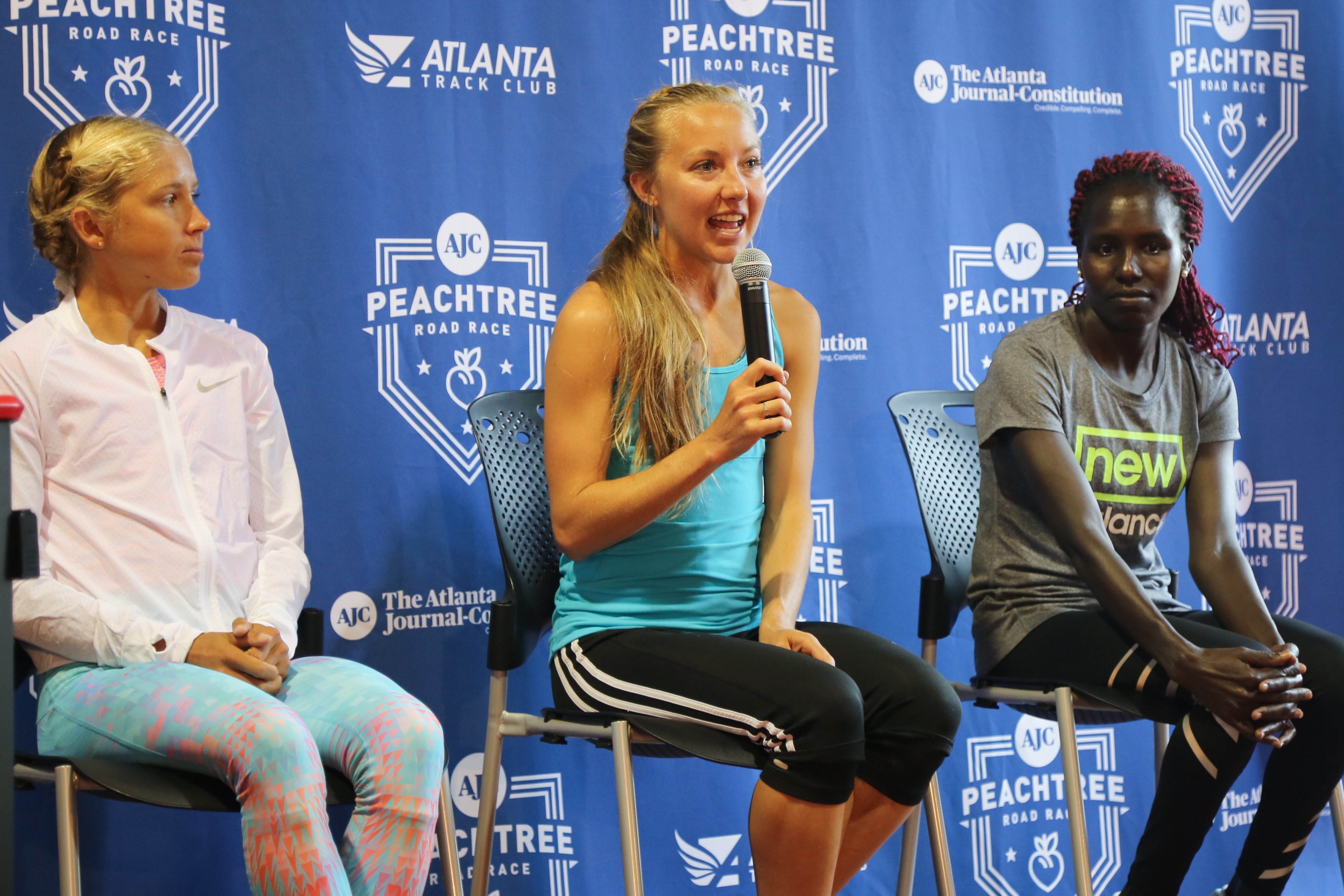 In addition to Lagat, contenders for the USA title on stage included Sam Chelanga, Chris Derrick, Jordan Hasay, Neely Gracey, and Aliphine Tuliamuk, who was born in Kenya and has already won five U.S. titles on the roads since becoming a citizen last year.

“I don’t think it will ever wear off,” she said of draping the American flag over her shoulders after crossing a finish line.

Tuliamuk will be among the race favorites, along with Gracey, who finished as first American at Peachtree last year, and Hasay, whose 2:23:00 finish in the Boston Marathon this spring was the fastest debut ever by an American at that distance.

“The energy on the course is amazing,” she said. “I’m looking forward to having that energy push me up those hills.”

The terrain is something Hasay, the reigning USA champion at 15K and 10 miles, is looking forward to, with Peachtree’s Cardiac Hill a close cousin of Boston’s equally legendary Heartbreak Hill.

“I’m very excited about the course; it’s very similar to Boston,” said Hasay, who finished third in that race. “I’ve listened to the Peachtree Podcast, so I feel very informed about the course. It will help me knowing that 60,000 other people have to go up that hill as well.”

Derrick, the three-time USA cross country champion who will be making his debut at the distance here, called Peachtree part of a natural transition from the track, with road veteran Chelanga saying: “I guess I’ll just say ‘welcome to the roads.’ It’s a very exciting place.”

The 36th running of the Shepherd Center Wheelchair Division will mark the return of 17-time Paralympian Tatyana McFadden to racing. McFadden has not competed since the Boston Marathon, where she finished fourth after several hospitalizations—including one just two weeks before that race—for blood clots.

McFadden is undefeated here in six appearances, going back to 2010. “It’s definitely going to be a year of ‘road to recovery,’ but I’m still hoping to push really strong for the Peachtree,”said McFadden, the defending champion.

At 53, local favorite Krige Schabort of Rome, GA, is 35 years older than his youngest competitor in the open division, 18-year-old Daniel Romanchuk—who won last year’s Junior Peachtree. Schabort, who notched the first of his five Peachtree victories when Romanchuk was only 3 years old, last year won the masters division but opted for a return to the open in 2017, figuring “I’ll throw myself in and see how it goes.”

After losing a leg in a motorcycle accident less than five years ago, John Pulliam fell into a depression until being inspired by photos of disabled athletes participating in everything from scuba diving to Ironman.  Now a prolific racer at the age of 50, he will compete in the master’s wheelchair division. He is also one of 20 athletes who are part of race sponsor Mizuno’s #WhyIPeachtree campaign.

What will he be thinking at the starting line?

“The most important thing that’s going through my mind is … that when I feel like I want to quit and give up, I can’t make it to the finish line, hopefully if there’s someone out there who’s struggling and is in that dark place I was in, I [will be hoping] that I can encourage them to get up and chase that finish line.”