ATLANTA – June 14, 2018 – Three of four reigning AJC Peachtree Road Race champions will return to defend their titles. The defending women’s champion and both defending wheelchair champions will be in Atlanta on July 4 while a first-time Peachtree Champion will be crowned in the men’s race.

In the footrace, which will again serve as the USATF 10 km Championship, Aliphine Tuliamuk (Flagstaff, AZ) tops a star-studded women’s elite field that will blaze the trail for 60,000 runners and walkers in the world’s largest 10K. 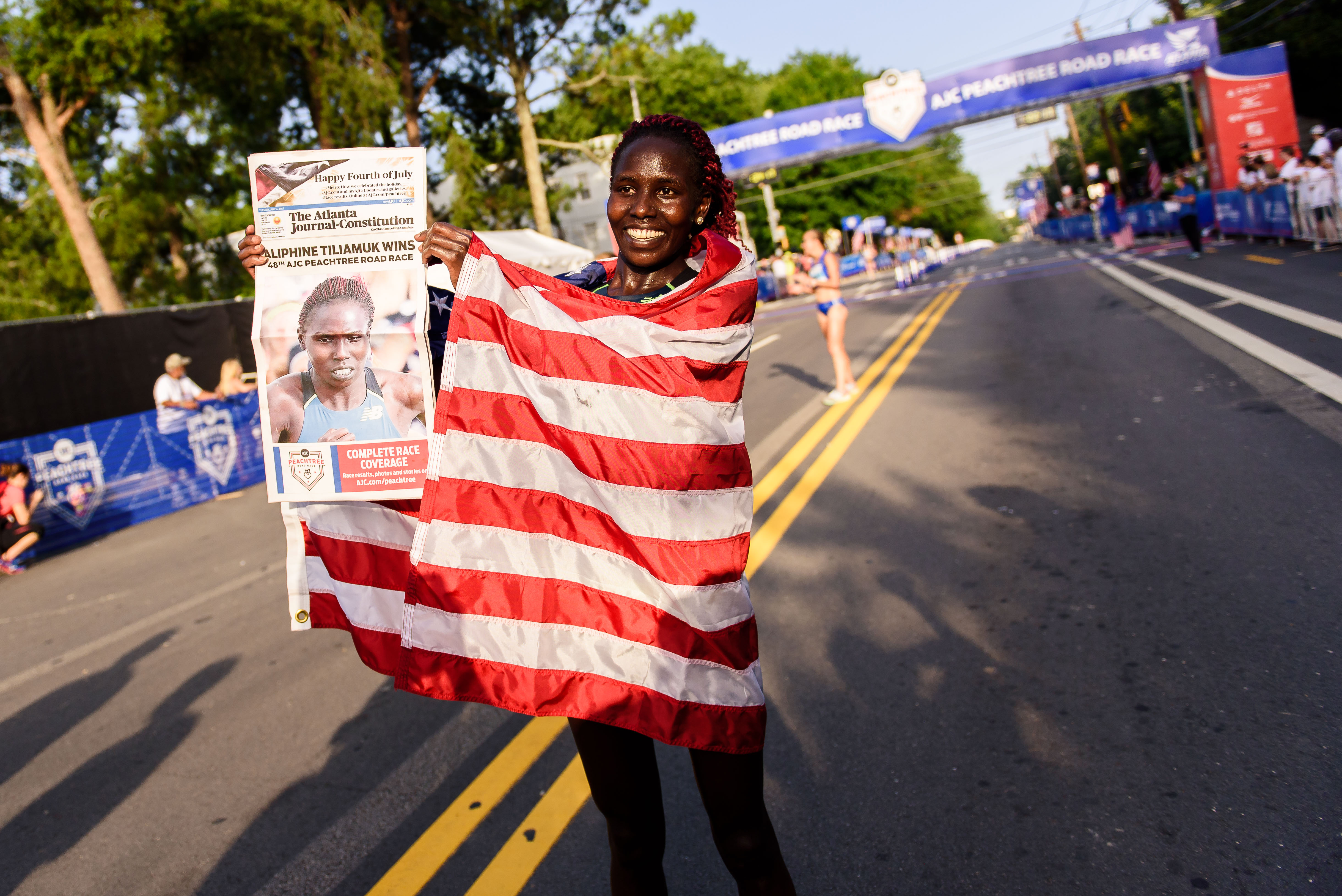 Tuliamuk won last year’s race in convincing fashion and has dominated the U.S. road circuit in 2018, winning national titles in the half marathon and 15K. Most recently, she was the top American and finished second place overall in the NYRR New York Mini 10K in New York City. Despite all her success in the past year, she still considers the Peachtree a career-defining moment. “It’s one of the most memorable races I have ever run,” said Tuliamuk. “I would love to smile until my cheeks hurt and hold my flag until my arms can’t support it like last year.”

A win for Tuliamuk will not come easy. 2017’s runner-up Sarah Pagano (Boston, MA) will return. Pagano recently unleashed a punishing kick to win the Freihofer’s Run for Women 5K in Albany, NY. Also in the women’s field is Sara Hall (Flagstaff, AZ), who last month recorded the ninth-fastest marathon time ever by an American woman at the Ottawa Marathon (2:26:20). Emma Bates (Boise, ID) who was second American at Bolder Boulder 10K (behind Tuliamuk) last month, London Marathon 10th place finisher Stephanie Bruce (Flagstaff, AZ) and Allie Kieffer (Buffalo, NY) who was the second American in the 2017 TCS New York City Marathon will all be making their debuts on Peachtree.

In the men’s elite field, a new face will break the tape on 10th Street for the first time as no one entered has ever won the AJC Peachtree Road Race. Leonard Korir, last year’s Champion in thrilling fashion, is sidelined by injury, but the two men who joined him on a 1,000 meter sprint down the final straightaway are both returning. Shadrack Kipchirchir (Colorado Springs, CO) fell short of a victory by less than a second in his Peachtree debut. This year, he says he is ready for the deceptively long stretch between the final turn and the finish line. “Last year I was a rookie on the roads,” said Kipchirchir, a 2016 Olympian at 10,000 meters. “I thought when we made the left hand turn it was over. This year, I know it’s a long straightaway.”

A complete list of athletes competing in the USATF 10 km Championships will be released in late June. The 2018 AJC Peachtree Road Race prize purse of $70,000 will be awarded exclusively to American athletes in the championship race with the top male and female runner each earning $10,000. The winners names are placed on the Peachtree Cup.

No one in any division has won more AJC Peachtree Road Race titles than Tatyana McFadden (Clarksville, MD). With seven July 4th victories to date, she will look to secure number eight in the women’s wheelchair division. “I love this race,” said McFadden. “It’s really technical and it’s really fast. The course is fierce.” McFadden, who won her fifth Boston Marathon in April will face competition from last year’s runner-up Susannah Scaroni (Champaign, IL).

Teenage phenomenon Daniel Romanchuk (Urbana, IL) looks to recapture last year’s magic in the men’s wheelchair division after winning in 2017 as an 18-year-old. He comes into the Peachtree with a pair of third place finishes at World Marathon Major races in 2018, securing podium spots at the Boston and London Marathons. He also smashed the world record in the 5,000m on the track this year. Romanchuk will have to fend off 2010 and 2013 AJC Peachtree Road Race champion Josh Cassidy (Guelph, Ontario, Canada) in order to claim his second consecutive title.

The Wheelchair Divisions of the AJC Peachtree Road Race include open, quad, T-1 quad, masters, juniors, grand masters and push assist divisions. All are managed by The Shepherd Center. An overall prize purse is available with the winners of the open men's and women's divisions each winning $5,000.

The 49th running of the AJC Peachtree Road Race will take place on Wednesday, July 4, 2018. It will be broadcast live in the Atlanta metro-area on WXIA-TV.  A tape-delayed broadcast will air on NBC Sports at 8 p.m. that evening. For more information, visit peachtreeroadrace.org.