Kim Romanchuk was at a Baltimore-area picnic for children with spina bifida, watching her tot play in the sandbox, when a woman told her about an adaptive sports program for kids with disabilities.

“You’ve got to get him in there,” the woman insisted. So when Daniel reached the required age of 2, the Romanchuks signed him up for the Bennett Blazers. By his 3rd birthday, he was swimming on his own. Once he started school, he would spend all day Saturday going from one sport to another – basketball, sled hockey, you name it – before finishing it all off with an uphill wheel back to the family car.

Daniel Romanchuk, now 20, will return to the 2018 AJC Peachtree Road Race as defending champion, in the midst of a year that has already seen him finish third at marathons in both Boston and London and set two world records on the track.

The woman who suggested he join the adaptive program that launched his career? Deb McFadden, mother of a young girl who would go on to become a 17-time Paralympic medalist and seven-time Peachtree champion – so far.

“He’s a young Tatyana,” says the mother of arguably the greatest wheelchair athlete in history. “He will break all the records.” 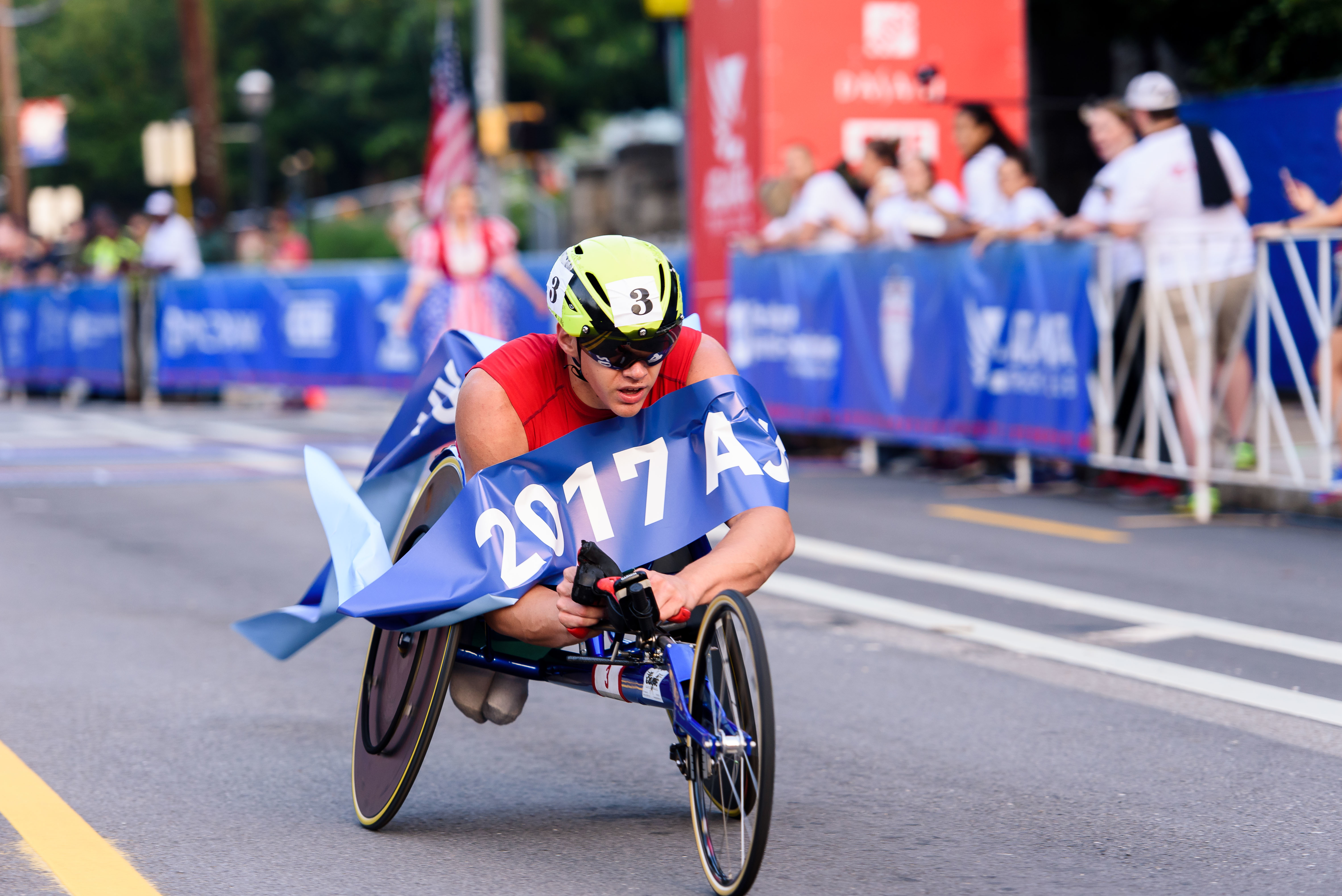 As the years passed at Bennett, Romanchuk began to gravitate toward wheelchair racing. He was 16 when he committed to training for the 2016 Paralympics, making frequent trips from his Maryland home to be coached by Adam Bleakney at the famed program of the University of Illinois at Urbana-Champaign, where McFadden also trains. Many of the older athletes, both there – where he now trains full time – and elsewhere, took him under their wing.

Chief among them is Krige Schabort of Cedartown, Georgia, a five-time winner of the pro division at Peachtree who this year is a favorite in the master’s division. Now 54, Schabort finished second to Romanchuk in last year’s New Balance Falmouth Road Race, and later told the Cape Cod Times that he never had a “friendship connection” with the top athletes when he was younger, so “now it’s nice to share my experience with [Romanchuk] and see how he develops as an athlete. And, what a great guy to see coming up the ranks.”

Earlier this year, Schabort and Bleakney helped Romanchuk get set up in a new, more-responsive carbon-fiber racing chair to replace his aluminum model, and in his first race out he finished an unexpected third in the Boston Marathon. He followed that up with another podium finish, again third, in the Virgin Money London Marathon six days later.

“I was very surprised by both of those outcomes,” he said in a recent telephone interview.

No wonder: A year earlier, Romanchuk had finished 16th and 26th, respectively, in those 26.2-milers. Since those breakthroughs, he has won the Lilac Bloomsday Run 12K and set world records for his classification, T54, on the track at both 5000 meters and 800 meters. In the latter, on June 15, he became the first man T54 athlete to break the 1:30 barrier when he clocked 1:29.66. (Three-time Peachtree champion Kurt Fearnley tweeted afterward: “This kid is beyond amazing. Trained with him in Newcastle in January and he eats up pain!”)

“So to be truthful, the results of the last two months have been really exciting but a little overwhelming,” he wrote on his Facebook page in late June. “So it’s taking some time to process everything.”

Romanchuk’s first recollection of going up against top athletes was at Falmouth in 2013, when he was just 15. While he remembers being “in awe” of Schabort’s ability to change a flat tire while he was still in the chair, he wasn’t intimidated by the competition – but only because he didn’t know he was supposed to be.

“At that point,” he said, “I was new to the scene, so I was going to go out and go race but had absolutely no thought as to who was there. I do realize it now.”

Many wheelchair racers have had long careers. Besides Schabort, 54, there’s Ernst van Dyk of South Africa, 45; Masazumi Soejima of Japan, 47; and Switzerland’s Heinz Frei, 60, who won his first London Marathon three years before Romanchuk was born and earlier this year finished 18th in a field of 56 there.

Asked if he might be around as long as some of his rivals – if he’s still racing at Frei’s age, he would have a 45-year career – Romanchuk said he hasn’t given much thought to it, but hopes to still be in the sport whether as an athlete or as a mentor himself.

Meanwhile, said the phenom: “I still have lots and lots to learn.”