Sam Chelanga Runs to the Beat of His Own Drummer

ATLANTA -- June 30, 2017 -- When the first five laps of the men’s 10,000 meters went out slower than the women’s at the recent USATF Outdoor Championships, Sam Chelanga took matters into his own feet.

The crowd cheered as he sprinted to the front.  When the pack reeled him in, he surged again, over and over, until finally he could surge no more and fell back to seventh. Running forums buzzed: What was he trying to do out there?

In a post-race interview, Chelanga told the gathered journalists: “I just wanted to race, and I raced. I learned a little bit about myself.”

During a phone interview a few days later, he fielded the obvious follow-up question: What did you learn?

“I have what it takes,” he said. “If I play my cards right, I can do this. I don’t need to fear. You don’t know the next moment, and the last one is past tense. I just tried to make the best out of my current moment, which was ‘let’s make it a race.’ And I can live with that.” 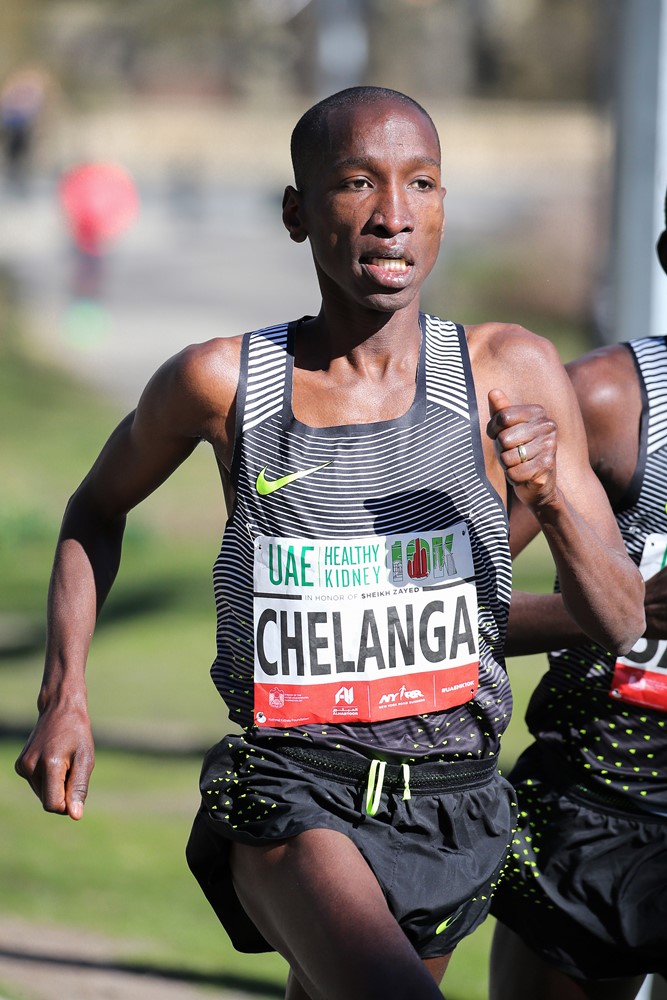 ove was in keeping with his approach to life. Back in his native Kenya, Chelanga  dreamed about going to college so that he could help the people of his remote village. His brother, Joshua (third in the 2001 Boston Marathon) trained with a man who was willing to help the young Chelanga in more ways than just running and visa applications.

“Paul was the person who saw something in me and said, ‘listen, I want you to go higher than you think. When I tell my story, I always give so much credit to Paul Tergat.”

Tergat, a two-time Olympic silver medalist at 10,000 meters and a five-time IAAF World Cross Country Champion, is now a member of the International Olympic Committee.

He has also helped the people of Kabarsel. Several years ago, Chelanga and several friends raised enough money to provide 92 filters, each serving an average of three families, to help produce water that is safe to drink. Finding funds to drill a sustainable well is the next step.

After almost two years training in Tucson, AZ, Chelanga moved last fall to join the American Distance Project in Colorado Springs, CO, where he said he’s reveling in the majesty and fresh air of the mountains. His coach, Scott Simmons, also helms the Army’s World Class Athlete Program, meaning that Chelanga now trains with the likes of 2016 Olympians Leonard Korir and Shadrack Kipchirchir, both of whom will also vie for the USA 10 km title at the AJC Peachtree Road Race, as well as 5000-meter Olympic silver medalist Paul Chelimo.

“The depth, too many guys,” he said, in admiration. “You never get in a group where you have three or more guys who can win a race.”

But Chelanga sees the benefits as having depth in another way, as well.

“Scott has given me the opportunity to be myself,” he said. “I know I’ve got people at different levels; if I’m not feeling good I can run with people at that pace and if I’m feeling good there are people who can go as fast as you want. I do well when I feel like I’m in control. It gives you confidence.  [Scott] isn’t going to be a director; he’s more like an assistant, trying to guide you through the sport of running. Not too much thinking. You run happy. You run fast when you’re happy.”

His two sons—Micah, 4, and Noah, 4 months—help him live in the moment.  There is beauty, he said in the fact that a child doesn’t know what he’s going to do the next day, just like a bird doesn’t know where he will get something to eat, but somehow they survive.

Why, he asks, should we worry so much?

At Peachtree, don’t look for Chelanga to employ the same strategy he used at the track championships. Don’t look for him not to use it, either. And don’t think that he’s fretting ahead of time about his race plan.