Sarah Pagano is Ready for Her Closeup

Atlanta - June 26, 2017 -- As a fifth-year senior at Syracuse, with a resume portending success in her chosen career as a physician’s assistant, Sarah Pagano began to call pro running coaches.

“I look back and think how naïve I was,” said Pagano, now 25. “I had never been All-American in anything yet, so I really had no right to keep doing this.”

Pagano would finally earn that All-American status in her last college race, when she finished seventh at 10,000 meters in the 2014 NCAA championships with a 45-second personal best. That confirmed what had been a nebulous feeling: I have more left. While driving her packed car from Syracuse back to her hometown of Ringwood, NJ, she stopped at a coffee shop to keep a phone appointment with Terrence Mahon, coach of the newly formed Boston Athletic Association High Performance Team.

A few weeks later, they met. He was direct: This is going to be hard. He was impressed: She didn’t flinch.

“I think her greatest attribute, or at least the one that jumped out at me the most, was her feistiness,” said Mahon. “She is quick to take offense when told that she can’t do something, and I could tell that she would work really hard to prove to anyone, and to herself, that she matters in this sport.” 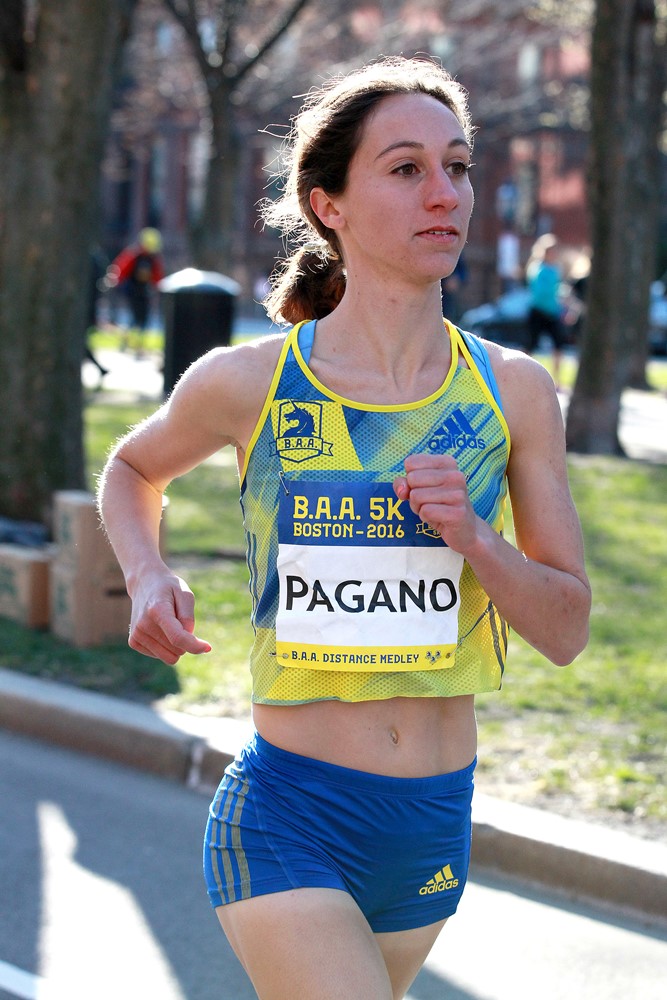 er of the B.A.A. team, Pagano comes into the AJC Peachtree Road Race as the 2016 runner-up in the USA 10km Championships.  It was a breakthrough race in a breakthrough season last fall after her performance at the 2016 Olympic Trials—in which she finished 17th in the 10,000 meters and failed to make the 5000-meter final—prompted her to ask herself, “OK, what do you want?”

The answer: “I wanted to put myself out there, to start competing better. I don’t want to be that person who qualifies, or who is up there and maybe mentioned. I want to be up there competing with whoever is in the race, no matter what.”

It’s something she learned, at least in part, from training partner Jen Rhines, a three-time Olympian and now a top master’s runner with whom Pagano shares a deceptive low-key vibe. One day not long after Pagano joined the team, Rhines mentioned while they were out for a run that, at the age of 40, she wanted to compete for the U.S. one more time. Then she went out and earned herself a spot on Team USA for the 2015 IAAF World Cross Country Championships.

“She put her mind to something and she did it,” said Pagano. “It’s so inspiring.”

In Pagano’s first race after those track Trials, she finished fourth in a strong field at the USA 5 km Championships on Sept. 18, and followed that up by going out hard with eventual winner Emily Sisson in the USA 10 km Championships on Columbus Day; a 5:01 first mile saw the two of them gap the field early.

“I had decided before the race that I was going to stay with her for as long as possible, but then I looked over and it was a mile in and no one else was there and I was like, ‘OK, I guess I’m doing this.’”

She kept doing it through the rest of 2016 and straight into the New Year: After a win at the Monterey Bay Half Marathon on November 13, Pagano was runner-up in the Manchester Road Race on Thanksgiving Day before breaking the tape at the NYRR Midnight Run on New Year’s Eve.

This January, she made her debut as a member of Team USA at Great Edinburgh Cross Country, finishing ninth as second American, and quickly followed that up by competing for the U.S. at the IAAF World Cross Country Championships.

Pagano recalled that first phone conversation with Mahon. Instrumental in the career of at least eight Olympians, he congratulated her on her seventh-place finish at NCAAs, but bluntly asked why she didn’t get first, second or third. It had never crossed her mind: Her goal had been to be in the top eight so she could be an All-American.

“I always think back to that moment,” she said. “Why couldn’t I have been top three? In the last couple of years, my mindset has changed a lot.”