ATLANTA – August 17, 2018 – This Saturday, Atlanta’s Finest 5K will feature some of the finest master’s runners in the country, as the race plays host to the USATF Masters 5 km Championship. Atlanta Track Club’s masters team goes into the race as the clear favorite in the overall team competition and will have athletes in nearly every age group expecting to finish on the podium. Read on as we take a quick look at some of the top athletes and races to keep an eye on this weekend.

Hailing from Blue Ridge, Virginia and part of Roanoke Valley Elite, David Angell is the current leader in the Masters Grand Prix Series and the unquestioned favorite heading into the race. Angell is a three-time USATF Masters 5 km National Champion, and has also recorded two age division titles in the 8 km and 10 km. Angell should finish under 16 minutes and take the overall title, but the 43-year-old’s only competition will come from Atlanta Track Club’s Alan Black, who ran 4:37 in the mile earlier this season. Unfortunately, Black is working his way back from an injury that has kept him out of contention in many the year’s previous races.

On the women’s side, Atlanta Track Club’s Laurie Knowles heads into the race as the favorite. Knowles, a four-time qualifier for the U.S Olympic Team Trials – Marathon, is an incredible runner and a stalwart on the Club’s masters team. Knowles will be looking for her first masters national championship, but she’ll be tested by Athena Track Club’s Christy Peterson, who was the runner-up at last year’s 5 km Championship in Syracuse, New York. 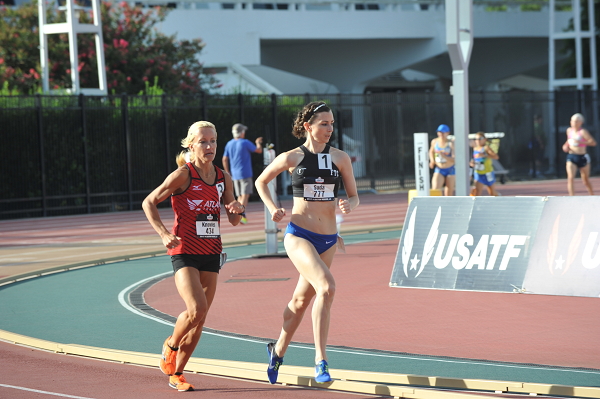 Sonja Friend-Uhl of Atlanta Track Club is already the oldest woman to ever break five minutes in the indoor mile and has become one of the most dominant American masters runners of all time over her last five years of competition. This Saturday, she’ll be looking to take another national title and take points off of Jennifer Bayless of Impala Racing, who currently sits above Friend-Uhl in the Masters Grand Prix Series. Additionally, she’ll have to fend off Cassandra Henkiel, last year’s overall national champion in the 5 km who is racing for the first time in the 45-49 age group, and Molly Watcke of Boston, Massachusetts, who ran a 35:51 at this year’s AJC Peachtree Road Race.

Atlanta Track Club’s Eric Stabb highlights the men’s 50-54 division. Having competed on the Club’s masters team for the past 10 years, the 50-year-old makes his 5 km debut in the 50-54 division looking to hold off Tim Meigs of Bull City Track Club, who won this age group at the 2017 Boston Marathon.

Keep your eyes trained on Nat Larson in this division. The Flint, Michigan native already owns the American record in the one mile (pending), 5K and 8K, and may even have a chance to dip down and beat a number of the runners from the Men’s 50-54 division.

2017 champion Carmen Ayala-Troncoso of Austin, Texas will be looking to defend her title in this division. At 58 years old, she ran a 19:47 last October to take the 5 km championship by a huge margin. Looking to chase her down will be the Atlanta Track Club’s Ena Weinstein, who represented Peru in the marathon at the 1984 Olympics and who has been a mainstay on the Club’s masters team over the last decade.

Tom McCormack of Atlanta Track Club heads into this race as the holder of the 12K and one-mile American records in this division, including an incredible 5:03 mile in 2014 to set the record. But across the board, Atlanta Track Club will have strong runners in this division, including Mike Anderson and Ken Youngers. Youngers, who has been on the team for 21 years, regularly finishes in the upper 80th percentile in age-graded scoring and ran a 28:45 earlier this year in the USATF Masters 8km Championships to finish third. 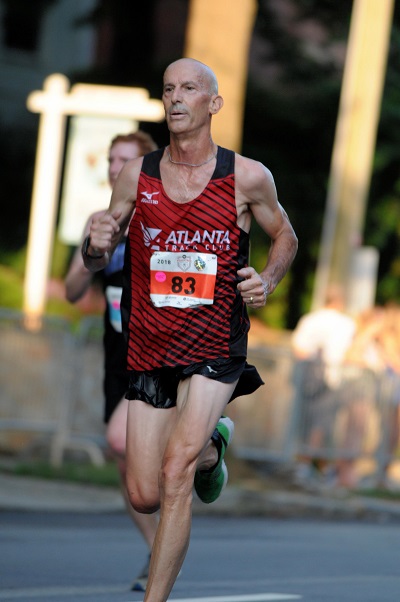 No preview would be complete without the mention of Betty Lindberg, the 93-year-old stalwart and holder of the American record in the women’s 90-94 mile. She’ll be the sole competitor in this division, and by virtue of that fact will accomplish a long-held goal: Winning her first national championship. 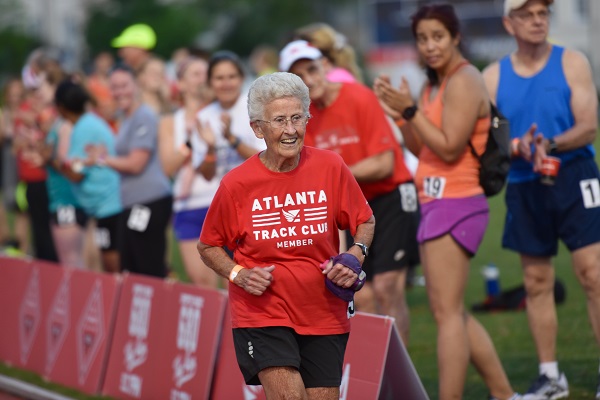