ATLANTA – July 4, 2018 – For the 49th consecutive year, Atlanta began its Fourth of July on Peachtree, as 60,000 runners and walkers converged on a humid summer day to finish the AJC Peachtree Road Race. With the Peachtree playing host to the USATF 10km Championships for the second consecutive year, the first men and women to finish, Bernard Lagat (Tucson, AZ) and Stephanie Bruce (Flagstaff, AZ), were crowned national champions. 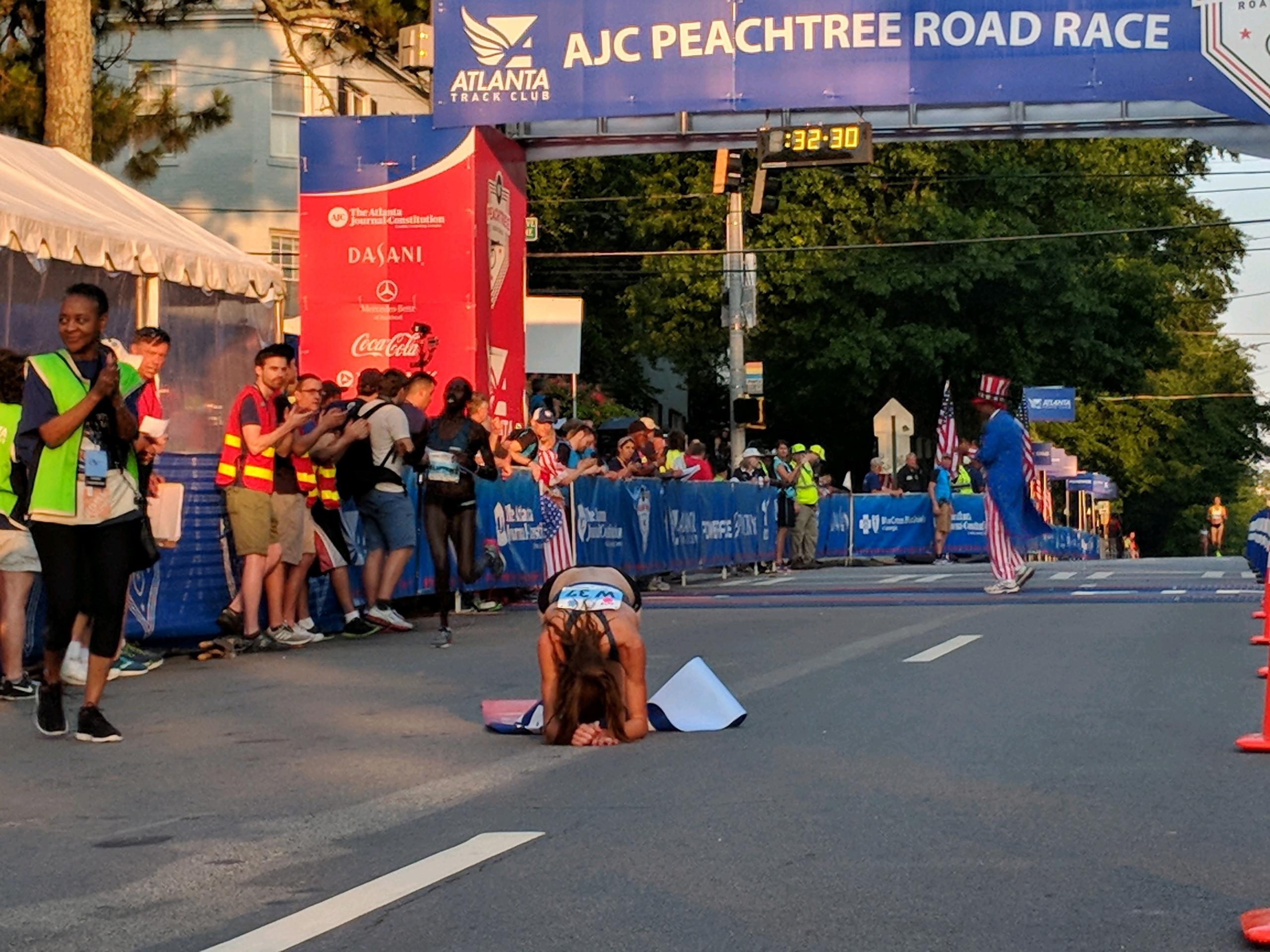 Both veteran runners took their titles in similar fashion, throwing surges throughout the back half of the race before kicking for the victory. Each will take home $10,000 as part of the prize purse and have their names etched onto the Peachtree Cup for the first time.

For Bruce, this victory was particularly special, as it marked her first national title of any kind. The 34-year-old has had a series of near misses throughout her career, but today was able to reel in her training partner and the defending AJC Peachtree Road Race champion, Aliphine Tuliamuk, to claim the victory in 32:21, a new personal best.

“It was a long time coming,” said Bruce, who runs for Northern Arizona Elite. “I knew how strong [Aliphine] was, but this was just years of accumulated work and believing in myself. This may be the highlight of my career this far, and it’s exciting to do it in Atlanta.”

Lagat, 43, had already set the masters course record of 28:42 in his fifth place finish at Peachtree last year, but the five-time Olympian was determined to come back to Atlanta to seize victory in 2018. Battling runners significantly younger than him, national champions, and the heat, Lagat was able to outwork Haron Lagat (Colorado Springs, CO) Tyler Pennell (Blowing Rock, NC), Sam Chelanga (Colorado Springs, CO) and Lopez Lomong (Portland, OR) to win the race in 28:45. All five were together as they made the left hand turn onto 10th St. 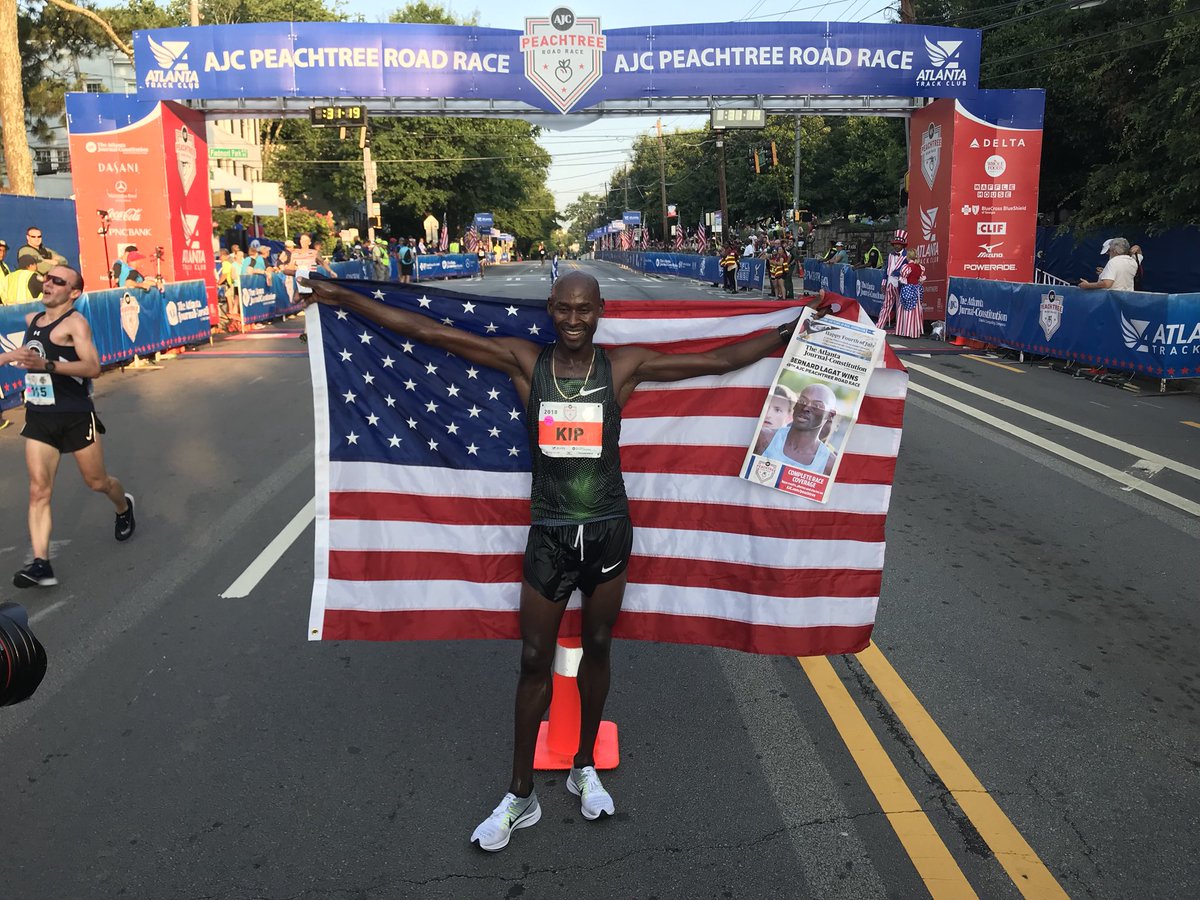 “I was fifth last year and I wasn’t satisfied,” Lagat said. “So I told Atlanta Track Club that I was going to come back and I was going to win. I trained so hard, but it was worth the sacrifice and it means so much to win because it’s on July Fourth.”

The Shepherd Center Wheelchair Division saw the biggest upset, as seven-time and defending Peachtree champion Tatyana McFadden was taken down by Susannah Scaroni. Scaroni, who also defeated McFadden at the New York Mini 10K in June, battled back and forth with Scaroni throughout the race, but was able to outlast the defending champion on her way to a finish in 22:49.05.

The men’s side of the wheelchair division went more according to plan, however, as 19-year-old phenom Daniel Romanchuk powered his way to a second straight Peachtree victory. His time of 18:39.42 was just one second off a course record that has stood for 14 years.

“This is always a wonderful race,” said Romanchuk. “It definitely felt good, with good conditions. There’s a great group of athletes that come out here and it’s just a wonderful race.”

Jason Parks of Decatur and Yolanda Ngarambe of Atlanta Track Club Elite took home the title of Top Georgian, winning in 31:50 and 34:54, respectively.

Behind the elite athletes, runners continued to pour across the finish line and into the meadow at Piedmont Park throughout the morning, including Mayor of Atlanta, Keisha Lance Bottoms. Running with Atlanta-based rapper, Jeezy, in support of his Street Dreamz Foundation and Kilometer Kids, this marked Bottoms’ first Peachtree as the Mayor.

“As I was running I was just thinking about what a blessing it is to run in this capacity,” she said. “It really is just about getting out here. Nothing says ‘Atlanta’ more, and it really is an honor to see 60,000 people coming out to celebrate Independence Day in Atlanta.”

The AJC Peachtree Road Race finisher’s T-shirt was unveiled after the race as well, as Michael Martinez’s “A Stroll Down Peachtree,” was revealed as the design on the shirt handed out to all 60,000 finishers.

“Last year’s winner, [Kevin Benton], was my inspiration,” Martinez said. “I had his design on my wall where I would see it every day and would say ‘I’m going to win this year.” 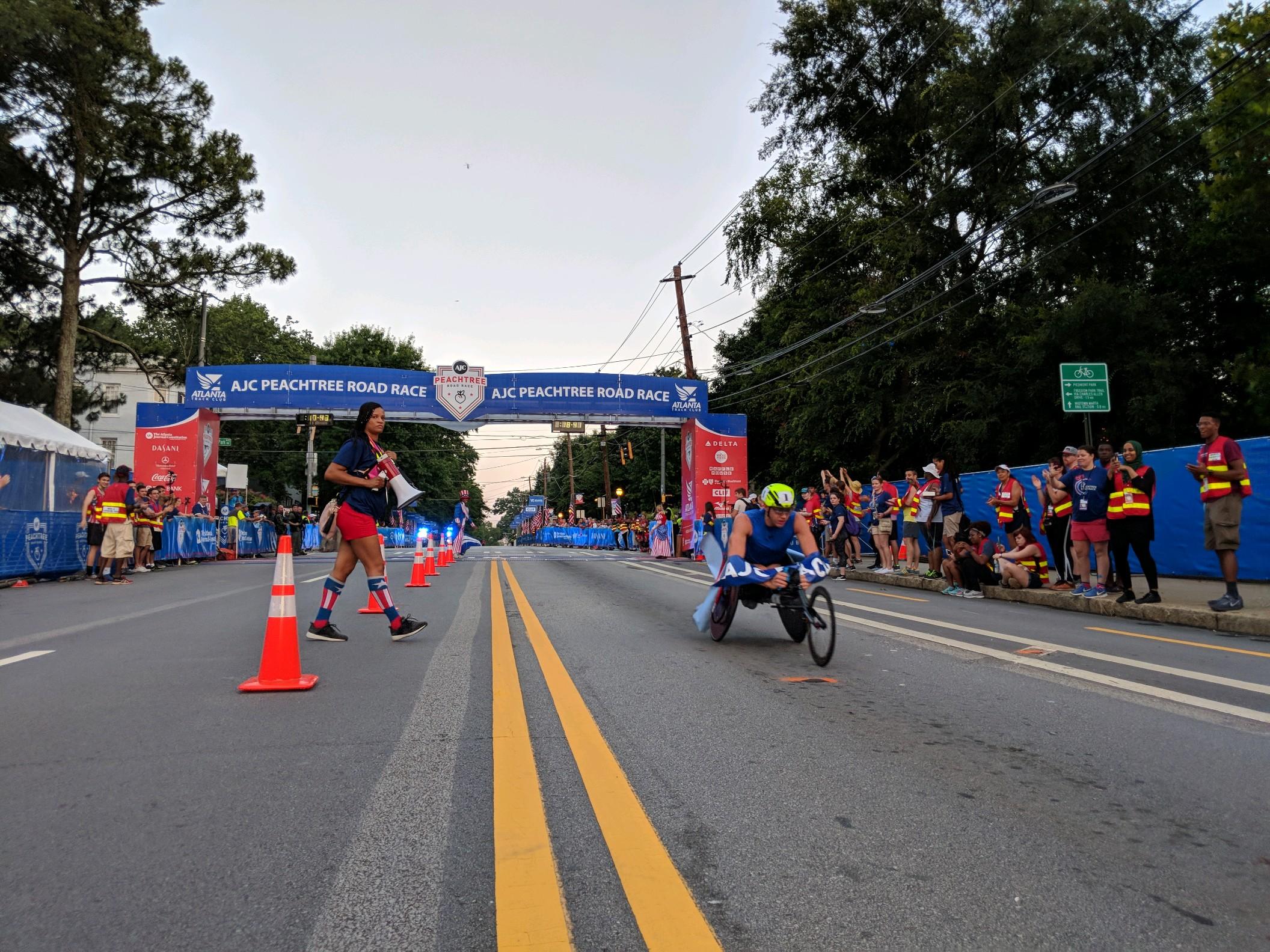 “As our final finishers stream across the line, we are already hard at work planning next year’s AJC Peachtree Road Race,” said Rich Kenah, Race Director of the AJC Peachtree Road Race and Executive Director of Atlanta Track Club. “Next year we will celebrate 50 years of Atlanta’s Fourth of July tradition, and we expect it to be a historic party.”