Top runners from middle school to the pros put on a thrilling performance at the 2018 Wingfoot Mile last night. Hosted by Atlanta Track Club at Emory University as part of the All Comers Track & Field series, spectators were treated to a fantastic evening of track featuring seven back-to-back races. The races saw tight finishes and personal bests all night long, even as the rain picked up later in the night. Let's take a look at how it all went down.

The elite men’s race was set up for blazing fast times and potential history. With 10 runners on the start line who had run under 4:00, plus Brodey Hasty trying to become just the 11th high schooler in U.S. history to break 4:00, the stage was set for drama. Then it rained.

Just as the race was about to get started, the downpour began, which, along with gusts of wind, took away the shot at a historically fast race. But the drama was still there. The first runners came through the 400m mark in 58.8, and a lead pack began to separate as early as the 600m mark. Atlanta Track Club Elite’s Brandon Lasater and Ed Kemboi weren’t able to stay on the pace, falling into a chase pack along with Hasty. 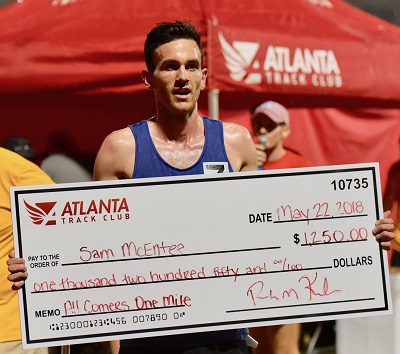 The lead pack kept surging through the driving rain, with Ford Palmer of HOKA NJ-NY Track Club at the front of a pack of eight runners still in contention as they entered the final lap. Sampson Laari of Ghana made the first move with about 250m to go, moving up all the way to second on the backstretch.

But as he faded, Sam Mcentee, an Australian Olympian in the 5,000m, and Neil Gourley, representing Scotland and Virginia Tech Elite, made their move past Palmer. Gourley looked like he might have enough to pass Mcentee in the final stretch, but the Australian was able to hold him off and take the win by just 17 hundredths of a second. Mcentee’s victory in 3:58.26 stayed true to his recent form, as he was coming off a victory at the Medtronic TC 1-Mile. He also set a meet record with the fastest mile time in All Comers history, was one of just three runners to break 4:00 on the night, and took home $1250 in prize money for the win.

Willy Fink of Virginia Tech Elite, who finished in third, ran his first-ever sub-four mile last night, a truly impressive feat given the conditions. He dropped his personal best from 4:02.61 to 3:59.44. Lasater, the two-time defending champion, wasn’t able to keep his hot streak alive and finished 13th in 4:09.68. Kemboi was able to make a late surge and move up, finishing 11th in 4:06.50.

Heading into the race, it seemed like this one was simple: It would be a battle between the two runners from NJ-NY TC, Heather Wilson and Stephanie Schappert. Wilson had previously broken 4:30, and Schappert wasn’t far behind, having posted a 4:30.07. But in the rain, expectations went out the window, as the race slowed down considerably.

That set things up perfectly for Agnes Abu, who graduated from Middle Tennessee State University just weeks ago. The Ghanaian national record holder in the 800m laid in wait, hanging behind the runners of NJ-NY TC and Atlanta Track Club Elite’s Yolanda Ngarambe, hoping for a chance to put her speed on display.

With 500m to go, Anna Connor of High Performance West made a move from the back and tried to open up a lead. Abu and Wilson went with her, and it was Abu who made a thrilling counter, surging past both on the backstretch and taking a commanding lead. She powered through the final turn, showing off her 800m closing speed and taking the victory by more than two seconds with a 4:37.79. Connor finished second, with Wilson and Ngarambe behind her in 4:40.33 and 4:40.82, respectively.

For Abu, this race completes a remarkable, undefeated two-week stretch in Georgia. First, she won the All Comers elite women’s 800, then followed that up by obliterating her personal 800m best with a 2:00.87 in a victory at the USATF Georgia Meet of Champions Dream 800 last Saturday. And last night, even in the pouring rain, Abu lowered her personal best in the mile by an astonishing six seconds.

Ngarambe also made a serious dent in her PR with her 4:40.82, which shaved about four seconds of off her previous personal best.

Until a day before, the boys' high school Wingfoot mile was supposed to be a battle for Georgian supremacy, with East Coweta’s Kyle Harkabus and Trinity Christian’s Jacob McLeod expected to duke it out. But a late entry from Scott Thompson of Brentwood High School – A teammate of Hasty’s – mixed the race up, as Thompson’s best of 4:08 made him the favorite.

The race went out remarkably fast, as a 16-runner field bolted out of the gate. Throughout the first 800m, the pack stayed largely together, a massive stream of high schoolers refusing to separate from the pacer and from the leader. But heading into the fifth turn, McLeod, Harkabus and Thompson opened up the race and formed a 3-man pack ready to chase the victory.

Harkabus, the state champion in both the 800m and 1600m – the holder of the fastest time in Georgia in the 1600m – Seemed poised to make a late kick and take the race from the back. And with Thompson’s faster previous races, it seemed like he might just be waiting out the race with a plan to close hard. But McLeod simply would not let go.

The Trinity Christian senior threw haymaker after haymaker, making surges through the last lap to try and drop Thompson. And even as Thompson made his push on the final turn, McLeod continued to battle and would not let him inch ahead. In a thrilling finish, McLeod was somehow able to hold on and edged out Thompson by less than half a second. His 4:10.95 smashed his previous PR of 4:14.92, made him the fastest boy in the state this year, and gave him the fastest time in Wingfoot Mile history.

All of the girls in the race knew who they had to beat: Naima Turbes. After winning the GHSA 3A State Championship in the 1600m and 800m, the Westminster School junior was looking to break her personal mark of 4:50.26 and sneak under 4:50. Jackie Addy of Holy Innocents and Brenda Ayuk of Alexander High School were ready to chase her, though it wasn't enough.

Turbes went out hard from lane one and stayed there the entire time. Addy was on her heels the whole way, staying right with her through a scorching opening lap. Ayuk was on an island in third place, well ahead of a chase pack but far behind the two leaders after 800m.

Turbes looked relaxed throughout, though, and turned on the jets with 600m to go, opening up a commanding lead. As she heard the final bell, she even broke a smile before getting back to the business of finishing off the race. Although Ayuk did make an excellent late push, there was simply too much ground to make up, and Turbes was able to cruise in for the win in 4:56.32. Ayuk’s 4:57.32 vaulted her past Addy, who finished third in 5:01.28.

The inaugural freshman mile was Kamari Miller’s to lose. Heading into the race having run a 4:25, he was the one all the other boys were chasing. Zack Truitt of Landmark Christian School was the only one fully up to the test, as he stuck with Miller throughout. The two put serious separation between them and a chase pack of Andrew Jones, Alex DeBoy and Hayden Marshall two laps in, making it a two-man race through the final 800m.

Truitt matched every move Miller made, staying right on his heels and within striking distance through 1200m. But in the final lap, Miller dropped a final burst and opened up the gap on Truitt, eventually powering his way to a win in 4:29.33. Truitt held on to second place with in 4:32.47, with Jones separating himself from the chase pack to finish third in 4:35.95.

With young adrenaline coursing through them, the boys’ middle school mile went out fast, with Joey Voss of Alpha Crush Running Club taking them out to a 71-second first lap. His previous PR of 4:44 made him the favorite, but Jared Fortenberry of Marietta Middle School, Andy Salgado of Shiloh Middle and the Blaha twins of Atlanta Track Club weren’t done in by his early burst.

Those five opened up a sizeable lead on the rest of the pack, but as they entered the second to last homestretch, the movement began. George Blaha – trying to get under 4:50 for the first time – made his push, bursting to the front as they heard the final bell. His move was matched by Fortenberry, who stuck with Blaha through the turn before putting some serious distance between them on the backstretch.

Fortenberry cruised to the win in 4:46.25, a massive PR over his previous mark of 4:50 flat. Blaha wasn’t able to sustain the pace and was then chased down by Salgado, who finished in 4:49.24. Blaha just missed his goal and finished in third place with a 4:50.4.

Entering the middle school girls’ mile, Luna McCauley of Paideia was the considerable favorite, having already run a 5:24 earlier in the year. But Haley Davis of the Dekalb Trailblazers was ready for a race, as she went out and matched McCauley step for step to start out. Through the first two laps, the two girls ran together, with Clara and Heidi Heppner of Atlanta Track Club lurking a few strides back.

In the third lap, Clara made her move on the leaders, and as they entered the final 400m, it was Davis, McCauley and Heppner battling for the lead. But McCauley simply wore them out, as she was able to make a move down the backstretch to dust Davis and Clara and set herself up for the win. Clara gave serious chase, but ultimately wasn’t able to close the gap as McCauley took the win in 5:26.54. Heidi’s late move pushed her into third place, and both sisters set personal bests: Clara in 5:32.97 and Heidi in 5:33.03.