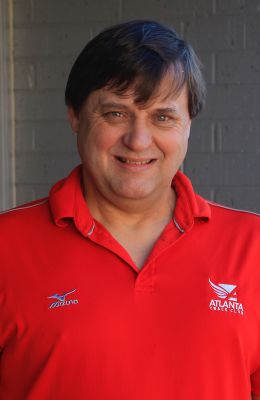 Worked at Atlanta Track Club Since: 1991

Brantley is 52 and claims to have been working at Atlanta Track Club since dinosaurs ruled the earth. His first year on the job, he knew nothing about the AJC Peachtree Road Race let alone the sport of running. He says the Peachtree was a mythical event with a crazy amount of participants that he had once heard about from "a skinny guy in my dorm." Now, he found himself helping to prepare for it. On the evening before the race in 1991, he brought a van full of marerials to the finish line only to then lock the kets in the van as it was parked right on the line! 26 years later, Brantley says he has learned not to lock the keys in the van anymore and he limits himself to losing the keys of the ocassional rental truck.