ATLANTA – February 19, 2019 -- The AJC Peachtree Road Race will award up to $200,000 in bonus prize money to athletes who break an event record at the race’s 50th Running on July 4, 2019, Atlanta Track Club announced today.  Any male or female winner of the footrace or Shepherd Center Wheelchair Division who tops the best times in their division will be awarded – on top of prize money – a $50,000 bonus in honor of the 50th Running.

The addition of the bonus likely makes the Peachtree the most lucrative 10K race in the United States, and for the wheelchair athletes it almost certainly offers the opportunity for the biggest single payday ever in a road race of any distance anywhere in the world.

“The AJC Peachtree Road Race has historically been a trailblazer in the world of elite road racing. From the addition of drug testing to official prize money, the event has led the way,” said Rich Kenah, Race Director of the AJC Peachtree Road Race and Executive Director of Atlanta Track Club.  “At its 50th Running, we’re excited to break new ground by awarding this unprecedented bonus for the wheelchair division and by offering the world’s greatest runners a lucrative incentive to run times never seen before in this country. I am hopeful we will see some fireworks here on the morning of the Fourth”

“This is a historic year for the AJC Peachtree Road Race,” said Becky Washburn, MS, wellness manager at Shepherd Center. “$50,000 is the highest bonus for a single event in wheelchair racing, and it sets a precedent for equality in the elite runners and wheelchair athletes.”

The most recent record-setting performance at 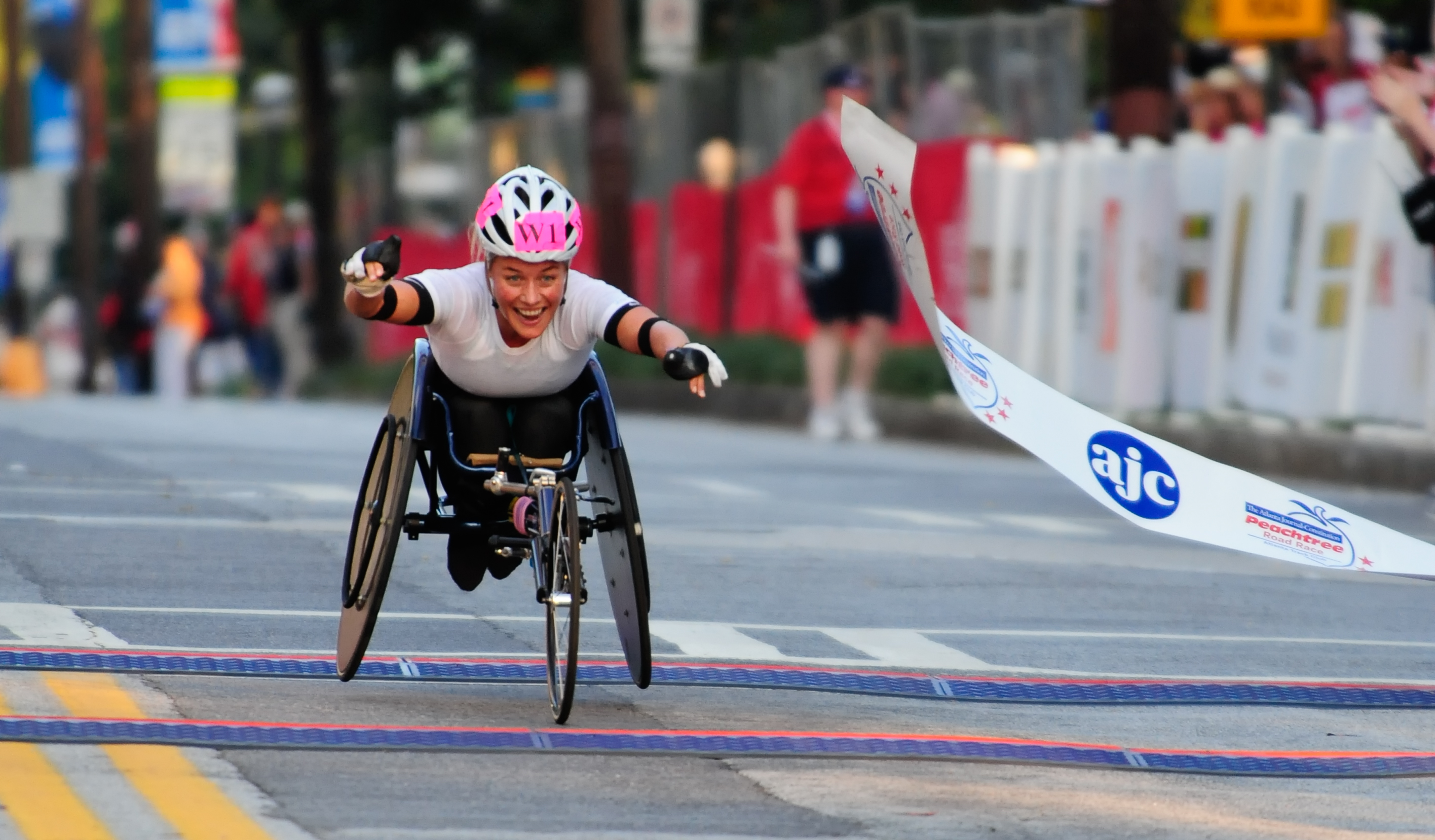 the Peachtree was in 2009 when Edith Hunkeler set a record in the women’s wheelchair division by winning her fourth Peachtree in 22:09. The men’s wheelchair record of 18:38 set by Saul Mendoza has been in place since 2004, but Daniel Romanchuk came within two seconds of breaking it in 2018.

“At first I wondered if there was a missing decimal point,” said the 20-year-old Romanchuk of the bonus. “This is a historic event in wheelchair racing. Much respect to Atlanta Track Club and Shepherd Center for being pioneers in elevating recognition of our sport to a whole new level. Breaking that course record won’t be easy, but I’ll give it my very best effort. Last year had great conditions and I came close but it wasn’t quite fast enough. It will be a challenge!”

“I am beyond excited that Peachtree took the commitment of promoting equality,” said seven-time Peachtree champion Tatyana McFadden “This is a huge step, and it really says something. Thank you, Peachtree, for being an example for others to follow.”

The current event records for the footrace are some of the strongest in international road racing. Joseph Kimani’s winning time of 27:04 in 1996 is still the fastest 10K road race ever run on U.S. soil. And no one at the Peachtree has come closer than 19 seconds to Lornah Kiplagat’s winning time of 30:32 set in 2002.

“It’s a great idea. It’s also an honor,” said Kiplagat. “Such a huge bonus clearly shows that this is a special record and it will be extremely tough to break it. But I hope someone does, because records are there to be broken.”

“Joseph would be really honored by the fact that his mark is being recognized as so significant, and that such a significant bonus is being offered to beat that record,” said Tom Ratcliffe, manager and friend to Kimani, who died of pneumonia in 2012 at the age of 40.

Despite being a point-to-point course with a net loss in elevation, the AJC Peachtree Road Race course is not considered especially fast. Runners begin the race with three miles of downhill racing before approaching the infamous Cardiac Hill, which climbs 12 stories over the course of a mile. Any runner looking to set a record will have to practice restraint in the first half of the race to have a shot at the bonus. In Kimani’s record-setting run, he split 4:34 for the first mile before going on to average 4:14 pace for the remainder of the race, breaking the previous record by more than 50 seconds.

Bonuses will be awarded only to the first athlete across the line to break the record, with a $50,000 limit per division. A prize purse totaling $140,000 across all four divisions is also offered.

Held annually on July 4 in Atlanta, Georgia, The AJC Peachtree Road Race is the largest running event in the United States and the largest 10K in the world. Registration is available March 15-31 with members of Atlanta Track Club receiving a guaranteed spot. All others will be entered into a lottery. More details can be found at atlantatrackclub.org. Registration for the Shepherd Center Wheelchair Division opens March 1 at Shepherd.org.