48-Hour Treadmill Challenge Off and Running

ATLANTA -- July 1, 2017 -- To the command of “runners, set” from 1996 Olympic gold medalist Dan O’Brien and the blast of a starter’s horn, the first two runners in the Kilometer Kids Charity Challenge hit the quick-start buttons on a pair of Woodway treadmills at 6 p.m. Saturday.

Those treadmills won’t be idle again until 6 p.m. Monday, as the 48-hour challenge between Team Stars and Team Stripes goes around the clock at the Peachtree Health & Fitness Expo, the hub of pre-race activity for the July 4th AJC Peachtree Road Race.

The fund-raiser to refurbish Cheney Track at Phoenix Park—the practice and warm-up track at the 1996 Olympics—has attracted the interest of not only O’Brien, but also Gail Devers, 1996 Olympic gold medalist at 100 meters and the 4x100-meter relay; Jeff Galloway, winner of the first AJC Peachtree Road Race, in 1970; Carrie Tollefson, 2004 Olympian at 1500 meters; Shalane Flanagan, 2008 Olympic silver medalist at 10,000 meters; and Scott Jenkins, general manager of Mercedes-Benz Stadium. 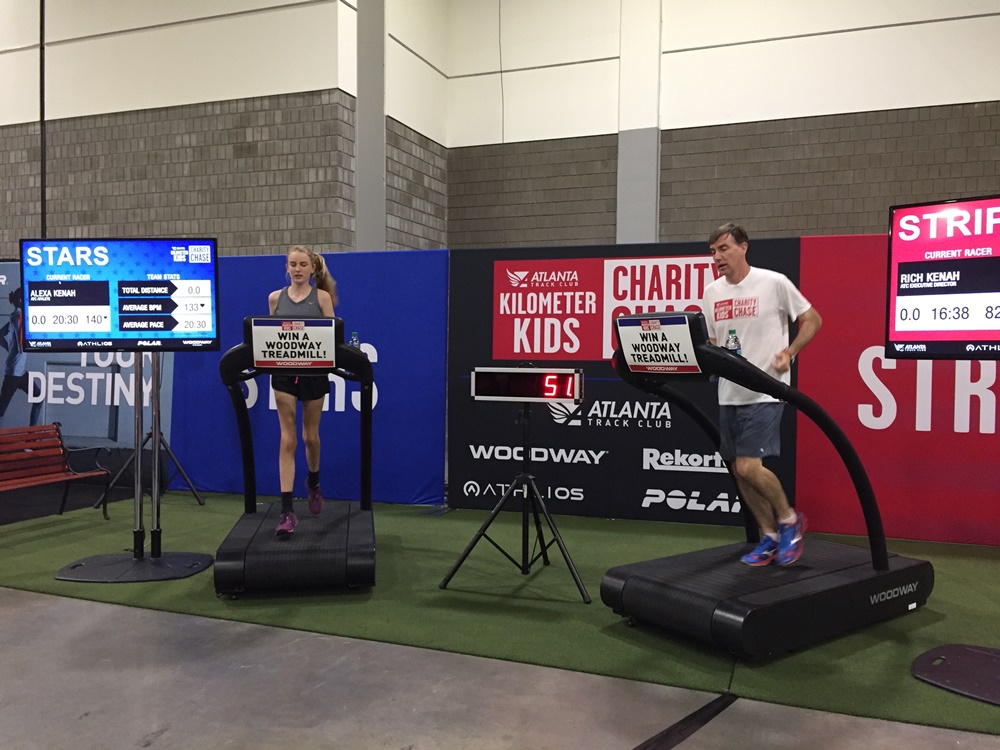 When revitalized, the track will be available for use by Atlanta Public Schools, the community and young people—including Kilometer Kids, Atlanta Track Club’s youth-running program.

Legs vary from 30 minutes to two hours, with nearly 100 runners taking up the challenge. Thanks to Polar technology, fans at the expo will be able to view readouts of the individual runners’ distance, average pace and heart rate, as well as the team totals for distance, average beats per minute and average pace. The teams will battle each other to see which can run the farthest and raise the most money.

A schedule of treadmill runners is available here.  A live Periscope stream of the challenge can be found on Atlanta Track Club’s Twitter feed and at the bottom of this story.

O’Brien, speaking at the challenge kickoff via Skype, called Cheney Track “an absolute piece of Atlanta Olympics history, and we definitely need to save it.”

To the invigorating beat of a mix tape specially chosen by DJ 412, who will also be on the post-race stage at Piedmont Park, Team Stripes was led off by Rich Kenah, executive director of Atlanta Track Club, with his 13-year-old daughter, Alexa, running the first leg for Team Stars.

“There’s no better time to celebrate running and give back to the community” than the days leading up to the 48th running of the AJC Peachtree Road Race, said Kenah. “Let’s do this right; let’s bring a track back to Atlanta that every kid can run on at any time.”