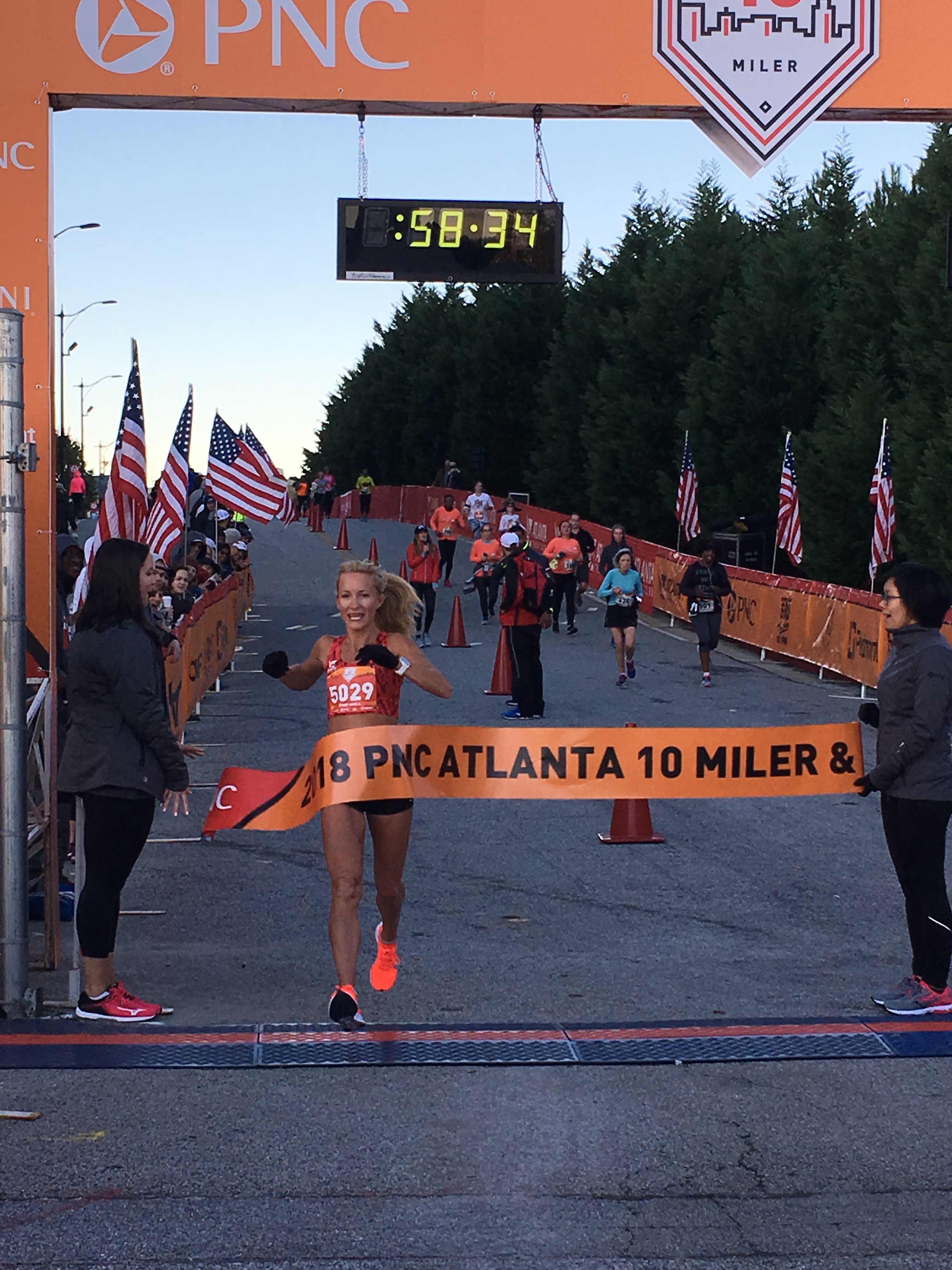 Evan Gates of Durham, North Carolina, blazed the way for the men in the PNC Atlanta 10 Miler finishing in a wild 51:30- more than four minutes ahead of second place finisher Jack Bordoni (54:45). A graduate student at Duke University, Gates was in town for a biomedical engineering conference and decided to run the race on a whim. “The win was a perfect cap to put on the end of my weekend,” said Gates. “I’ve had a great time with great food now a great race.” A modest description of his performance, as Gates broke the tape more than five minutes faster than last year’s winner.

On the women’s side, Atlanta Track Club Elite Laurie Knowles took her fourth event win of the year in 58:33. Knowles also won the Northside Hospital Atlanta Women’s 5K, Atlanta’s Finest 5K, and the Braves Country 5K in 2018 alone. Preparing for a marathon in coming weeks, she implemented today’s run as part of her training regimen. “I had a 20 mile run scheduled for today, and the race was a perfect way to push my pace,” Knowles said. “The temperatures were great, but I could have done without the wind.”

The chilly temperatures did not damper Atlanta Track Club Elite Benjamin LeBlanc’s enthusiasm for his first Club event win of his career- crossing the Atlanta 5K finish line in 16:29. “It’s actually the one year anniversary of when I was first introduced to Atlanta Track Club and the coaches,” Leblanc said. “It makes the win for me just that much more special.” Leblanc ran along with sister and fellow Club Elite Bethany LeBlanc (19:58). The rest of the LeBlanc family was also present to support.

The top female finisher for the Atlanta 5K was Brigitte Mania (17:19), who also runs for Atlanta Track Club Elite. Mania explained she used today’s temperatures as motivation for the win. An All-American athlete at the University of Connecticut, she’s no stranger to cooler weather. “During the race, I just kept thinking about college workouts on days like this and how strong I was,” Mania said. “I knew my body had dealt with cold weather before, and I used that to fuel me.”

The 2018 PNC Atlanta 10 Miler also featured Conquer Cardiac Hill presented by Mizuno. Located two miles into the 10-mile course, Cardiac Hill is the name given to the stretch of Peachtree Road that rises more than 12 stories in elevation in less than a mile. Splits were timed for participants as they ran from the top of the hill to the bottom. Overall winners Evan Gates and Laurie Knowles were also crowned King and Queen of Cardiac Hill for finishing the challenge the fastest in 4:56 and 5:32 respectively. The top 50 men and top 50 women particpants down the hill received a commemorative mug.

Participants of the PNC Atlanta 10 Miler enjoyed a cheer zone at every mile manned by 10 local nonprofits selected for Atlanta Track Club’s Adopt a Mile program. In its eighth year, the program is a way for the club to give back to the city it runs through while further engaging and involving Atlanta-area residents. Organizations are selected based on their efforts to improve the health and fitness of their community with an emphasis on youth-focused programs. “We chose these specifically so the program would resonate more with our race participants and so they’d know the donations were going back to the running community in some way, shape or form,” says Sue Payne, director of outreach at Atlanta Track Club. The Club will donate up to $3,000 to each of the nonprofit organizations depending on the level of assistance, participation and enthusiasm from each group. Additionally, the organization voted “Best of the Best” by event participants will earn a $500 prize. For a list of participating organizations, visit atlantatrackclub.org.