ATLANTA  -- MARCH 18, 2018 – On a sunny, crystal clear morning at Pemberton Place, nearly 10,000 runners and walkers crossed the finish line at the 12th annual Publix Georgia Marathon, Half Marathon & 5K. A field of runners from around the country were competing for a $6,500 prize purse.

The men’s marathon and the $1,500 prize was won by Sergei Zyrianov, who coasted to a sizeable margin of victory with a time of 2:29:37. Finishing behind Zyrianov were Jack McAfee in 2:38:32 and Tyler Anyan in 2:40:49.  Zyrianov, who trains in Gainesville, Florida, completed a year of dominating Georgia road races, with his victory today on the heels of triumphs at the Snickers Albany Marathon and the Augusta University Half Marathon. 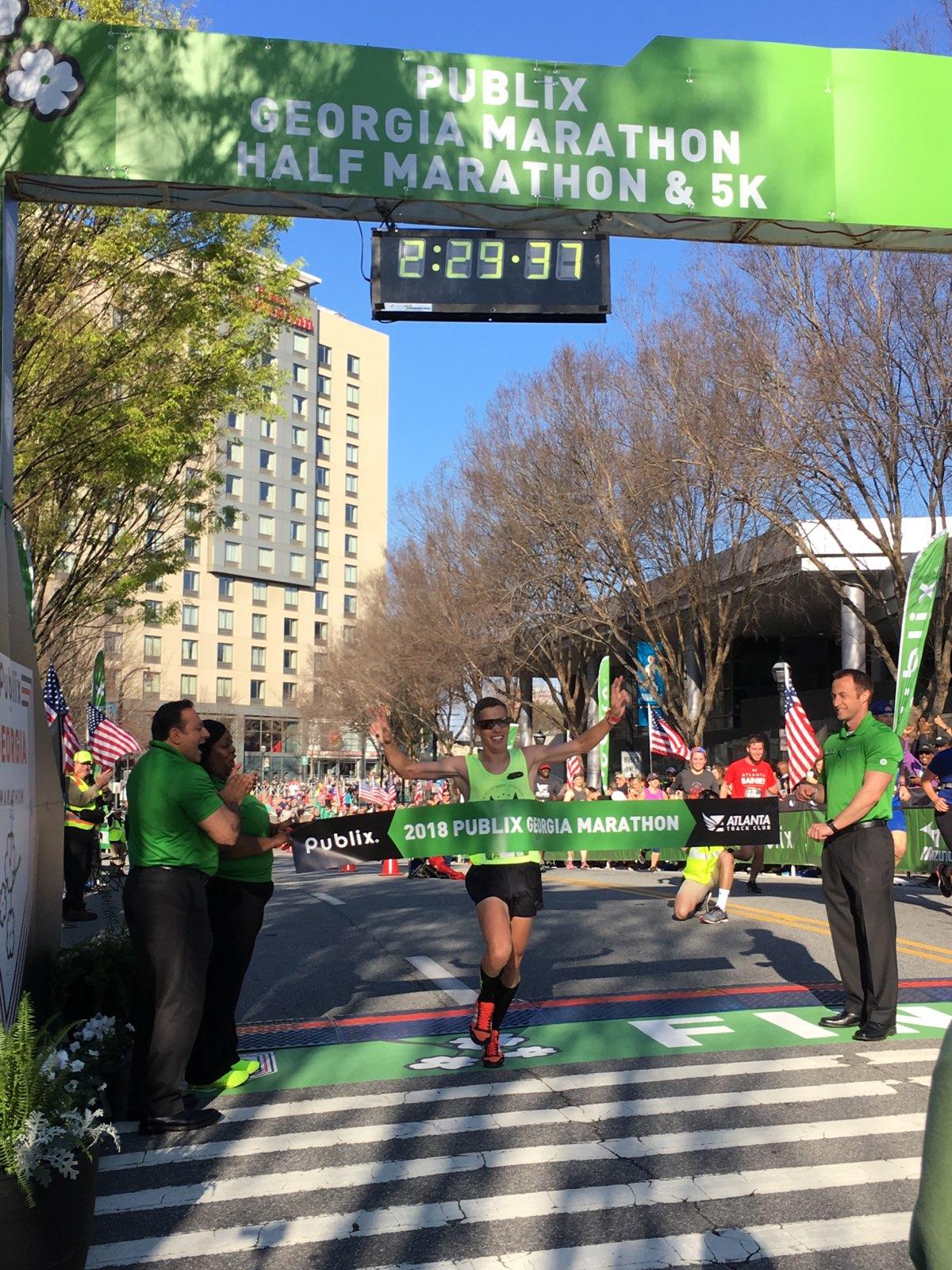 “I love Georgia,” said the native Russian, who also won last year’s Publix Georgia Half Marathon. “It was very hilly, but it was good. I feel good.”

On the women’s side, Marina Khmelevskaya led the way with a time of 2:52:31. Khmelvskaya, who represented Uzbekistan at the Olympic Games in Rio in 2016 in the marathon, trains together with Zyrianov in Gainesville. With a personal best of 2:37, she was able to keep a comfortable pace on her way to victory.

“It was a good race,” she said. “It was difficult, but I felt good and had good weather, so I just tried to take it easy.”

The men’s half marathon was dominated by local running group ITL, as their runners swept the podium and were separated by less than 80 seconds. Thiago Bianchini took the win in 1:15:03, with his teammates Nicholas Denari and Patrick Ollinger close behind.

“Today felt good,” said Bianchini. “From the beginning we had a nice pack, so we ran for about 10 miles all together and then it just became a race. I took off and it worked out for me. I guess today was my day.”

Tavyn Lovitt won the women’s race, as she stayed steady throughout to finish in 1:21:30. Lovitt, just 22, graduated from Ole Miss last May, where she competed on the Cross Country team.

“I wanted to go out in about 6:20,” said Lovitt, who currently works as an assistant on the Georgia Tech Track & Field team. “But I ended up going out around six minute pace and then from there just held 6:10 to 6:15 the rest of the way. I pretty much have to give all the credit to coffee and all the people screaming ‘girl power’ along the way.”

Earlier in the day, the 5K, held for the first time since 2016, was won by Brian Sydow in 16:42 on the men’s side and by Jill Braley on the women’s in 19:01. Terrapin Beer Co. sponsored a “Terrapin Chase” in the 5K, and all runners that finished in front of a pair of Atlanta Track Club Elite athletes wearing turtle costumes went home with a Terrapin prize pack.

The weekend kicked off Saturday morning with more than 800 children taking part in the Be Healthy Georgia Festival. The free event featured a One Mile and 50m Dash as well as a health and fitness festival in partnership with Georgia Shape, the Lt. Governor’s Office and the Arby’s Foundation. Groups with the largest number of participants were awarded scholarships totaling $3,250.

As the day concluded, Atlanta Track Club announced that next year’s race will be renamed the Publix Atlanta Marathon, Half Marathon & 5K. The event will feature a new course, designed to show off even more of Atlanta’s neighborhoods, parks and iconic institutions, churches, homes and businesses.

“Atlanta is one of the country’s best running cities,” said Atlanta Track Club’s Executive Director Rich Kenah. “We’re looking forward to showing off our beautiful city, its energetic and active community, and its hospitality to runners from around the U.S. and the world at the 2019 Publix Atlanta Marathon.”

Complete unofficial results for the 2018 Publix Georgia Marathon, Half Marathon & 5K can be found at atlantatrackclub.org. Official results will be available two weeks after the event.