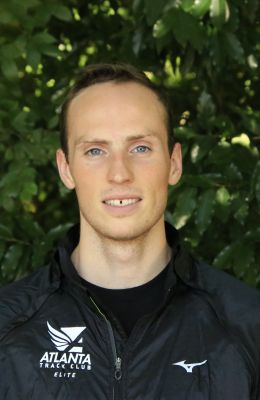 Matt began his running career at North Hunterdon High School where he was a Footlocker XC Finalist in 2010 and the NJ indoor 3200m Champion in 2011.  In fall of 2011 Matt joined the Princeton Tigers and found immediate success as the Ivy League XC Rookie-of-the-year, being the first freshman to cross the finish line at the Heps that fall.  He continued to contribute to the Tigers as the 5th man on the 11th place 2012 NCAA D1 nationals team and captain of the Triple Crown winning 2014-2015 Tigers; winning the Ivy League 10K champion (outdoors) and placing runner-up in the 5K (indoors) in 2015.  In mid-2015 Matt moved to Atlanta to run for Atlanta Track Club and pursue a Doctorate in Chemical Engineering at Georgia Institute of Technology. As a member of the Club, McDonald has transitioned to running the marathona and has qualified for the 2020 U.S. Olympic Team Trials - Marathon with a 2:14:05.